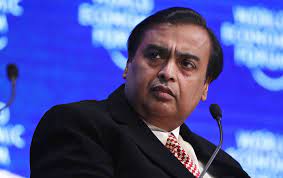 Roman Abramovich may have a net worth of almost £11 billion ($14.9 billion) following a rise from street trader to business mastermind – but his fortune is dwarfed by Indian billionaire Mukesh Ambani

The fortune of Indian billionaire Mukesh Ambani makes him the richest sports team owner on the planet dwarfing the net worth of Chelsea owner Roman Abramovich and Stan Kroenke of Arsenal among others.

Abramovich, who outside of Russia is best known for his efforts in west London, became the owner of the companies that control the club back in June of 2003.

Beginning his tenure by overseeing development of a state-of-the-art training complex in Cobham, Chelsea have gone on to win five Premier League titles and two Champions Leagues, making them one of the biggest clubs in world football.

Despite the enviable wealth of Abramovich, it is Ambani who holds the title of richest sports club owner, and has watched his side win championships in three of the last four seasons.

As chairman and managing director of Reliance Industries Limited, which in turn owns Indian Premier League juggernauts Mumbai Indians, Ambani is also the 11th richest person in the world with £62 billion ($84 billion).

According to Forbes, his net worth has increased 130 per cent in the last year, pushing him right to the top of the list and above Los Angeles Clippers owner Steve Ballmer’s £50 billion ($67.7 billion), who was CEO of Microsoft from 2000 to 2014.

Third on the list is Cleveland Cavaliers chief Daniel Gilbert at £38 billion ($51.4 billion), with Francois Pinault and family of Stade Rennais (£31 billion/$42billion) the highest of all the association football club owners.

That brings in Abramovich on £10.7 billion ($14.4 billion), with only two more owners of football clubs coming in the top 21 in the form of Arsenal’s Kroenke, (£6 billion / $* billion) and Fulham and Jacksonville Jaguars boss Shahid Khan at £5.9 billion ($8 billion).

Although the list is dominated by American sports, more and more wealth comes into the Premier League each season, with an estimated net worth for the owners of all 20 clubs coming it at around £185 billion ($251 billion) in 2020/21.

Despite the financial constraints that came for many lower league clubs from lack of gate receipts last season, Premier League clubs spent in abundance during the recent summer window.