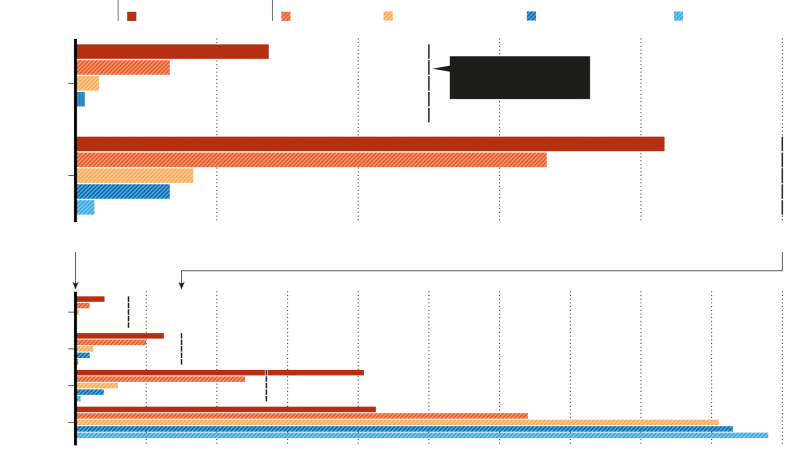 Samadhan is an outlier in his home village in western India. Last year, he became the first person from there to start a science PhD. Samadhan, a student in Maharashtra state, is an Adivasi or indigenous person – a member of one of the most marginalised and poorest communities in India.

For that reason, he doesn’t want to publicise his last name or institution, partly because he fears that doing so would bring his social status to the attention of a wider group of Indian scientists. “They’d know that I am from a lower category and will think that I have progressed because of [the] quota,” he says.

The quota Samadhan refers to is also known as a reservation policy: a form of affirmative action that was written into India’s constitution in 1950. Reservation policies aimed to uplift marginalised communities by allocating quotas for them in public-sector jobs and in education.

Mirroring India’s caste system of social hierarchy, the most privileged castes dominated white-collar professions, including roles in science and technology. After many years, the Indian government settled on a 7.5 per cent quota for Adivasis (referred to as ‘Scheduled Tribes’ in official records) and a 15 per cent quota for another marginalised group, the Dalits (referred to in government records as ‘Scheduled Castes’ and formerly known by the dehumanising term ‘Untouchables’).

These quotas – which apply to almost all Indian research institutes – roughly correspond with these communities’ representation in the population, according to the most recent census of 2011.

But the historically privileged castes – the ‘General’ category in government records – still dominate many of India’s elite research institutions. Above the level of PhD students, the representation of Adivasis and Dalits falls off a cliff. Less than 1 per cent of professors come from these communities at the top-ranked institutes among the 23 that together are known as the Indian Institutes of Technology (IITs), according to data provided to Nature under right-to-information requests.

Universities in India are failing to meet government quotas for marginalised communities in academia. The government provides detailed national figures for undergraduate and master’s students, but not for academic levels above those. Nature collated figures from right-to-information requests. These data show that the representation of marginalised castes and other groups falls at higher academic levels.

“This is deliberate” on the part of institutes that “don’t want us to succeed”, says Ramesh Chandra, a Dalit, who retired as a senior professor at the University of Delhi last June. Researchers blame institute heads for not following the reservation policies and the government for letting them off the hook.

Diversity gaps are common in science in many countries but they take different forms in each nation. The situation in India highlights how its caste system limits scientific opportunities for certain groups in a nation striving to become a global research leader.

India’s government publishes summary student data, but its figures for academic levels beyond this don’t allow analyses of scientists by caste and academic position and most universities do not publish these data. In the past few years, however, journalists, student groups and researchers have been gathering diversity data using public-information laws, and arguing for change.

Nature has used some of these figures, and its own information requests, to examine the diversity picture. Together, these data show that there are major gaps in diversity in Indian science institutions.

The challenge starts in schools and feeds through to university admissions. Adivasis and Dalits are under-represented in undergraduate science courses but not arts courses, higher-education survey data show (see ‘Undergraduate students in India’).

At undergraduate level, Adivasis and Dalits are under-represented in science courses but not arts courses. That is not because arts courses are more popular, but because teachers and mentors specialising in science are rare in the rural high schools attended by these students, especially Adivasis, says Sonajharia Minz, a computer scientist and vice-chancellor of Sido Kanhu Murmu University in Dumka, eastern India.

Samadhan says that when he started a life-science bachelor’s degree in 2009, students from privileged castes often called him and other students from marginalised communities “free off” – a slur referring to students on government aid.

Another marginalised group, termed ‘other backward classes’ or OBCs, makes up around 44 per cent of science students and 30 per cent of medical students at the undergraduate level. India’s national proportion of OBCs is not known, because the country’s census does not count them.

But a government household survey from 2006 suggests they make up around 41 per cent of the population. (Reservation policies require academic institutions to have 27 per cent of admissions or recruitments from OBCs.)

In 2012, Samadhan progressed to a master’s degree at a high-ranking university in western India. Student diversity at master’s level is slightly lower than at the undergraduate level, data show.

At master’s level, the under-representation of marginalised castes or groups in Indian universities worsens slightly, compared with undergraduates (2019-20 government data).

During his master’s, Samadhan often considered dropping out because he felt intimidated by the English-speaking culture and intense coursework that he wasn’t used to. This is a common experience among students from underprivileged communities, says Akash Gautam, a Dalit and an assistant professor of neuroscience at the University of Hyderabad.

“Many of them are first learners in their families. They need more time and support from the universities, which they don’t get.”

At the PhD level, the proportion of marginalised communities dips further – particularly at elite institutions. Data for PhD courses in 2020 at five high-ranked IITs, collected by Nature, show an average of 10% representation for Dalits and 2% for Adivasis – slightly lower than the average for five mid-ranking IITs. India’s top-ranked university, the Indian Institute of Science (IISc) in Bengaluru, fares badly too.

Data from a dozen Indian universities and institutes, sourced through information requests, show under-representation of marginalised castes in PhD programmes.

“Let’s face it, a PhD is somewhat of an elite pursuit” requiring financial support from families, says an IIT Delhi assistant professor from a privileged caste, speaking on condition of anonymity. Students from marginalised castes also often lack the recommendation networks and interview training to get recruited to PhD programmes, the assistant professor says.

Even when they start a PhD, many still struggle to find a good mentor willing to take them on. It is “quite common” for privileged-caste professors not to supervise students from marginalised communities, says Kirpa Ram, who belongs to the OBC grouping and is an assistant professor of environmental sciences at the Banaras Hindu University in Varanasi.

An Adivasi PhD student from a science department at Delhi University, for instance, told Nature that in 2018, when she approached a privileged-caste professor to be her supervisor, he responded that she was a “quota candidate” and could find a supervisor anywhere.

Gautam and other scientists told Nature that sometimes privileged-caste professors don’t provide the extra mentoring that students from underprivileged backgrounds might need – leading some to quit before completing their PhDs. “It’s a tactic,” Gautam says.

Very few doctoral students from marginalised castes reach staff positions in elite institutes. At higher-tier IITs and the IISc, 98 per cent of professors and more than 90 per cent of assistant or associate professors are from privileged castes, Nature found.

In the Mumbai-based Tata Institute of Fundamental Research (TIFR), all professors are from the privileged castes, the data it provided to Nature suggest. TIFR belongs to a class of federally funded ‘Institutions of Excellence’ exempt from following reservation policies.

Data from 13 elite institutions in India show that a very low proportion of faculty members are from marginalized castes, especially at the assistant professor level and above.

When staff do just the bare minimum at work, binge on social media and trade blame, think again