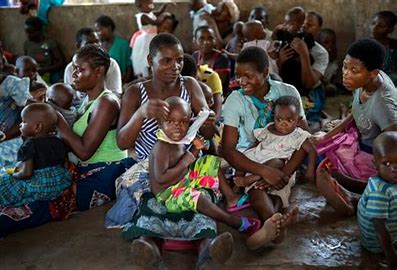 In a momentous and long-awaited decision, the World Health Organization (WHO) has recommended the wide rollout of a malaria vaccine to protect children in Africa. That opens the way for countries to decide how to use the vaccine, the first ever to be approved for a parasitic disease, as part of their malaria control programs. It also allows funders to pledge financial support for ramping up vaccine production and distribution.

Data from a pilot rollout involving more than 800,000 children in three African countries convinced a panel of malaria and vaccine experts advising WHO that the vaccine, called RTS,S or Mosquirix, is safe, and despite its modest efficacy should be offered widely to children in African regions that have moderate or high malaria transmission.

The vaccine only targets the malaria parasite Plasmodium falciparum, which is prevalent in Africa.

The announcement, capping a decades-long quest for a malaria vaccine, “is an historic moment in the fight against malaria,” says Corine Karema, a member of WHO’s advisory group for the pilot rollout and former director of Rwanda’s National Malaria Control Programme.

But not everybody is convinced the shots are the best way to spend scarce public health dollars in Africa. The vaccine is far from perfect: It requires four doses and only provides roughly 30% protection against severe malaria in children. Initial studies also raised possible questions about its safety, and some researchers caution that studies so far may have missed some of its downsides.

Malaria kills an estimated 260,000 children under age five in Africa each year, a number that was falling rapidly between 2004 and 2015 but has since levelled off. “We need new tools to get malaria under control,” WHO Director-General Tedros Adhanom Ghebreyesus said at a press conference today.

First developed in the 1980s, RTS,S contains a piece of a P. falciparum protein linked to a protein from the hepatitis B virus, which is added to trigger a stronger immune response. The vaccine is designed to block the parasite’s ability to infect the liver and mature there.

RTS,S was the first malaria vaccine to enter large trials in 2003. The initial results were encouraging, but hardly outstanding. The vaccine worked better when given to children starting at six months of age than in younger babies, which means it can’t piggyback on the standard infant immunisation schedule. And even then, the first three doses only cut the risk of clinical malaria by one-third.

More concerning, there were hints the vaccine might increase the risk of developing cerebral malaria or catching meningitis. Another analysis of the data concluded overall mortality increased slightly in girls who received the vaccine.

Still, the data were promising enough for the European Medicines Agency to approve the vaccine for use in children ages 6 to 17 months old in July 2015. But a few months later, WHO’s vaccine advisory panel decided the safety concerns and logistical hurdles needed more study and recommended a pilot rollout to better understand the vaccine’s real-world impact.

In response, WHO established the Malaria Vaccine Implementation Programme, which began to administer the vaccine to children in selected regions in Ghana, Malawi, and Kenya in 2019.

Initial data from the first two years of the program showed the logistics hurdles could be surmounted: Between 62 per cent and 67 per cent of eligible children in the rollout regions received the first three doses. (The fourth dose is administered 12 to 18 months after the third dose, so most children have not yet received it.)

The vaccine worked about as well as in earlier studies, lowering rates of hospitalisation for severe malaria by about 30 per cent. No increase in meningitis or overall mortality was observed. The data also showed vaccinations reached many of the most vulnerable children – those who don’t sleep under bed nets. That shows how it can complement existing tools, says Abdoulaye Djimdé, a malaria expert at the University of Bamako in Mali.

During its meeting today, the panel also heard about data from a recent trial in which Djimdé and his colleagues used the vaccine in combination with regular doses of antimalarial drugs, given prophylactically just before the rainy season in Mali and Burkina Faso.

But several experts say regional patterns of malaria transmission should determine how the vaccine is used. For example, protection appears to be strongest in the first six months following vaccination, so in regions where malaria is concentrated in the rainy season, the vaccine is likely to be most helpful when it is given just before that season starts, similar to the way influenza vaccines are given in the fall.

Christine Stabell Benn, who studies vaccine impacts at the University of Southern Denmark, cautions that given the vaccine’s waning protection, the data from the first two years of the pilot are “zooming in on the period of maximal benefit and minimal harm” from possible side effects, including rebound infections, in which children develop malaria after vaccine protection wears off.

Stabell Benn also notes that follow-up time in the pilot rollout was too short to measure whether the vaccine saved lives. The data showed a seven per cent decrease in mortality from any cause, but that was not statistically significant.

“They set out to detect a 10 per cent reduction in all-cause mortality. They haven’t achieved that,” she says. “And that’s during the period it’s supposed to be having the biggest effect.”

The vaccine’s cost could prove a drawback. GlaxoSmithKline, the company that makes RTS,S, has said it will sell doses at cost, plus a small markup that will go toward further research. The estimated $5 per dose is a bargain compared with many vaccines used in rich countries, but it still means countries will need to carefully consider how the vaccine fits in with other, less expensive malaria prevention tools, says Catherine Pitt, who studies the economics of malaria at the London School of Hygiene & Tropical Medicine.

Although today’s news is “fantastic,” Pitt says, “the budget doesn’t seem to be getting bigger, so hard choices have to be made.”

WHO leaders said study of the best use of the vaccine will continue. “We’d all like a magic bullet,” says Dyann Wirth, a malaria researcher at Harvard University and chair of WHO’s Malaria Policy Advisory Group.