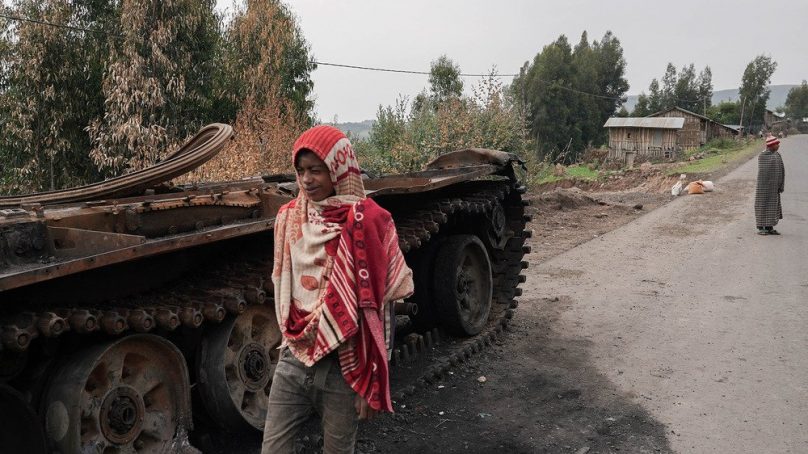 A humanitarian response plan for northern Ethiopia previously appealed for $854 million between May to December 2021. But that plan is now being updated with a new version expected in the first weeks of this month, according to United Nations Office for the Coordination of Humanitarian Affairs (OCHA).

“Cross-line operations have not been possible thus far in areas such as North Wollo and Wag Hamra,” Snowdon said, referring to efforts to bring food into conflict areas.

Other officials for international aid organisations said humanitarian supplies have yet to reach the Amhara towns of Weldiya, Lalibela and Sekota, which remain under rebel control. The officials asked not to be named due to the sensitivity of the situation.

Even where aid is being provided, conflict parties are often present nearby. On the main road in Dabat, just a few metres away from the food distribution site, groups of soldiers in Ethiopian army uniforms performed morning exercises before leaving to fight.

In the initial phases of the Tigray conflict, human rights abuses were mostly blamed on the Ethiopian army, as well as on Eritrean troops and Amhara militia. Reported abuses included dozens of massacres of Tigrayan civilians, the ethnic cleansing of Tigrayans in western parts of the region and the widespread use of rape as a weapon of war.

But since Tigrayan rebels captured most of Tigray in late June and launched a subsequent offensive, they too have been accused of a spate of atrocities in both Amhara and Afar.

In Chenna Teklehaymanot, local residents said rebels occupied the village for several days in late August, before being pushed out by Ethiopian troops. While retreating in early September, the rebels killed civilians, residents added.

While The New Humanitarian could not independently verify the death toll, Chenna Teklehaymanot residents said they buried dozens of bodies in a mass grave near a local church.

Other Chenna Teklehaymanot residents remain missing, said Firdiawkal Tegegn, who was searching for two of his brothers in the village. “[Rebels] left after killing dogs, humans,” Tegegn said. “Corpses are still lying behind the houses over there. They have not been picked up by anyone yet.”

Prime Minister Abiy Ahmed, who was sworn in for a new five-year term last week, and other senior Amhara officials have regularly called for mass mobilisation against the Tigrayan rebels, which analysts say has blurred the lines between combatants and civilians.

Atrocities by Tigrayan forces have also been reported in and around the Amhara town of Kobo, where eye-witnesses said hundreds of civilians were killed between September 8-9.

The New Humanitarian did not visit Kobo and, due to a communications blackout in the area, could not independently verify the death toll. A TPLF spokesman described the accusations against rebels in Kobo as “a figment of someone’s imagination”.

Kobo resident Baye Wodajew said rebels in the town indiscriminately killed people during home searches and on the main roads in and out of the village. People also died because of rebel artillery fire towards surrounding villages, Wodajew said, adding that his brother, Sisay, was among the victims – killed, he said, by rebels in front of his wife and children.

“I saw 50 to 60 [bodies],” Wodajew said from Addis Ababa, where he arrived on September 17. “We were just crying and collecting [the bodies]. Many of them were children and women”.

A lecturer at a college close to Kobo, Wodajew said universities in Amhara have also been destroyed, while health centres have been looted and livestock killed. “Why destroy the student record files? Why do they kill animals?” he said. “Their plan is to create poverty in Amhara.”

Many Kobo residents have moved 170 kilometres south to the town of Dessie, which has become a hub for displaced people from different areas. With main roads to the town blocked, residents often walk for days through the countryside before reaching safety.

Health workers from one international aid group said hospitals are short of medicine as injured people stream into Dessie and other displacement hubs such as Debark, a few hundred kilometres north.

While aid agencies try to respond to the crises in Amhara and Afar, they are still facing severe challenges in getting supplies into Tigray, where mass famine has left some residents eating leaves and plants to survive.

Aid groups say 100 trucks carrying relief assistance need to enter Tigray every day to avert the famine. But the Ethiopian government has approved only 606 trucks since 12 July.

Medical items are still denied entry to the region, and commercial supplies remain blocked, leading to severe shortages of essential commodities. The last remaining WFP fuel tanker in Mekelle – which other aid agencies had been relying on – ran dry on September 17, according to OCHA.

Addis Ababa says it has reduced bottlenecks for aid groups by cutting checkpoints on the only operational access road into Tigray. Government officials have also previously blamed the rebels for slowing down aid delivery.

Back in Amhara, the woman from Nefas Mewcha – the village recently liberated from Tigrayan forces – said her family was still trying to process what happened to them in September. The woman said her husband – a former soldier in the Ethiopian army – had been abducted and killed by the rebels. After dumping his body by a river, the fighters searched the family house, making her fear “they would kill me if they found his [uniforms]”.

Without a job, she said she was unsure how to support her children, who are still scarred by what happened last month: One refuses to accept her father has died, while another keeps reliving the incident, over and over.