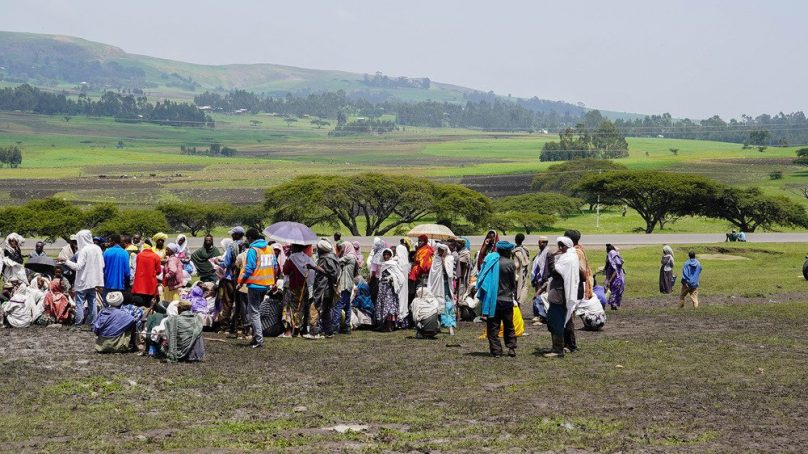 An upturned rebel tank lay by the road, overlooking fields of wheat and barley. Dead bodies were slumped in bushes and on muddy highland trails. Dark grey stones and the branches of a eucalyptus tree concealed a hastily dug mass grave.

Rebels from Ethiopia’s Tigray have taken their fight into the neighbouring Amhara region, bringing with them reports of deadly clashes, abuses against civilians, and fears that fighting could intensify as the grounds for reconciliation with the government recede even further.

“I hid in a small room and stayed inside without eating for four days,” said Priest Mengistu from the Amhara village of Chenna Teklehaymanot, where local officials claim over 120 people were killed by Tigrayan rebels in the first week of September. “At first… they said they wouldn’t kill us, but when they [left the village], they started massacring.”

Government officials in Amhara said half a million people have been uprooted since Tigrayan rebels launched an offensive in the region – Ethiopia’s second most populous – in July. Tens of thousands have also been displaced in the north-eastern Afar region, where rebels have spread their fight too.

On a visit to Amhara in early September, The New Humanitarian spoke to residents who recounted atrocities committed by Tigrayan forces, and others who spoke of disrupted livelihoods and dangerous journeys seeking places of refuge. The rebels have denied targeting civilians during their operations, blaming Amhara officials for mobilising people en mass to fight against them.

Humanitarian organisations, including the UN’s World Food Programme (WFP), said they are trying to scale up their operations in Amhara and Afar but face funding gaps and access constraints linked to ongoing fighting.

“Currently, we need $140 million to scale up as needed in the three regions of northern Ethiopia and this will increase if the situation worsens,” said Gemma Snowdon, a communications officer for WFP.

Even before conflict spread across regional borders, aid groups were struggling to assist more than 5.2 million people in need of assistance within the Tigray region, where tensions between the regional ruling party, the Tigray People’s Liberation Front (TPLF), and the government exploded into conflict in November 2020.

TPLF officials claim the rebel offensives in Amhara and Afar are necessary to pressure Addis Ababa into lifting a de facto humanitarian and economic blockade on Tigray that has left hundreds of thousands facing what the UN calls the world’s worst famine in a decade.

But the Ethiopian government is yet to allow commercial traffic into Tigray, telecommunications and banking services remain cut, and just a trickle of trucks carrying aid supplies have passed through the region since late June, according to the UN. Reports suggest malnutrition and starvation deaths in Tigray are now rising fast.

Meanwhile, in Amhara, one woman from Nefas Mewcha, a village occupied by rebels in August, said she was relying on donations from neighbours after fighters killed her husband. “[My babies] are getting sick. They cry throughout the night,” said the woman in her thirties whose name is being withheld to protect her identity. “Because of the fear, my breasts don’t provide enough milk.”

Tensions between Amhara and Tigray are long-standing. The two regions have been locked in a dispute over territory that reignited when Amhara militia annexed western Tigray during the current conflict.

Amhara militia fought alongside the government during its initial offensive in Tigray. The forces were accused of myriad abuses against civilians, as were government soldiers and the Eritrean troops working alongside them.

After initially retreating into the mountains, the Tigrayan rebels bounced back in late June – a dramatic about-turn that saw federal forces withdraw from most parts of Tigray. Addis Ababa declared a unilateral ceasefire, but the rebels instead pushed into neighbouring regions.

That advance has reportedly slowed in recent weeks after pressure from federal forces. In August, the army reclaimed much of central Amhara, while rebels have proved unable to control the crucial Djibouti to Addis Ababa trade route, which runs through Afar.

Still, fighting has continued, especially in eastern and northern Amhara, which lie close to the border with Tigray, creating a spillover humanitarian crisis that has overwhelmed an already overstretched aid mission.

The current fighting comes at a bad time for Amhara farmers, who would usually be preparing to plant their crops, said Gizachew Muluneh, spokesman for the Amhara regional government. “This season is a time to plough; it is a time to sow,” Muluneh said. “Unless they plough, they will starve. So, the problem is severe.”

The impact of recent fighting was clearly visible in Amhara. Conflict-affected villages like Chenna Teklehaymanot were completely deserted, save for a few residents who had decided to stay in order to look for lost relatives.

Residents who were able to escape Chenna Teklehaymanot said they had walked for hours on foot to reach the nearest town – Wuken – from where they shared rickshaws to reach a food distribution site in the town of Dabat.

Baye Girme, a father-of-five from Chenna Teklehaymanot, said his family had been eating only potatoes since escaping the village. “[Rebels] took the chicken, the goats, even the sheep,” he said, while preparing to carry supplies back to Wuken.

Aid workers in Dabat, who asked not to be identified, said they were handing out rations of cereal, oil, and split peas that would feed families for one month. But Baye said the portions would really only last a week or two.

WFP has said it plans to assist 250,000 people in Amhara, and a further 530,000 in Afar. But the agency said plans to scale up beyond that depend on whether it receives the additional funding it has requested.