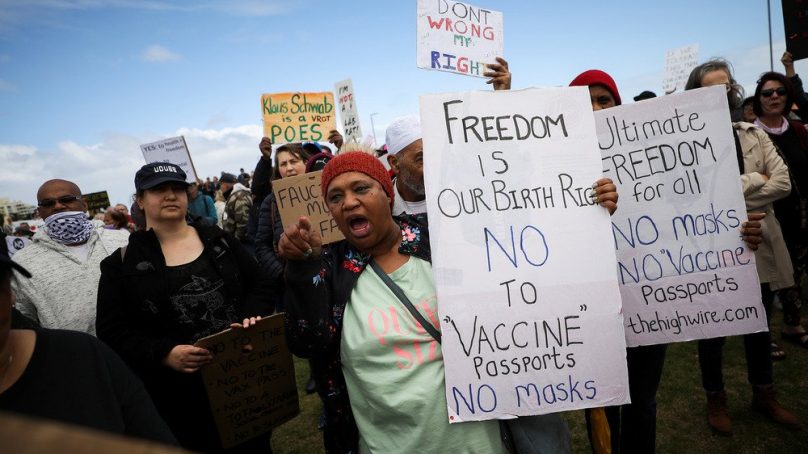 In Covid-19 vaccines, we have an extremely impressive piece of biotechnology. But they won’t do their job if the health system ends up perpetuating historical marginalisation and political humiliation. People get uneasy when the vaccinator shows up and says they must have a “jab”, especially while other forms of healthcare remain geographically and financially out of reach.

When people perceive they’re being accessed and treated not for their own good but because they’re a public health threat, it reeks of colonial-style “control-over-care”. If we can make vaccines free and compulsory, it’s natural to ask why can’t we make other forms of healthcare at least free.

Even as vaccine scarcity remains the greatest global health challenge, some countries with adequate supply have already begun instituting vaccine mandates to increase coverage. In the United States, the majority of workers are required to be vaccinated now; in China, the government has set vaccination quotas, which has led to authorities in some places using physical force to inject people.

But while vaccine mandates can be an important tool in dampening the pandemic, they must be rooted in a non-negotiable broader strategy to make vaccines and other preventive measures genuinely accessible. Vaccine mandates, like vaccines themselves – and masks and ventilation, and social protection programmes – are all tools. They are only partially effective if used alone.

Now is an opportunity to get a mass vaccination campaign right, to earn the public’s trust.

Even in countries where vaccines are plentiful, poorly designed mandates on top of inequitable access will inevitably mean that the communities governments have failed to support throughout the pandemic are shut out again.

As infections and deaths continue to mount and hospitals are stretched to the brink, it is critical that vaccine mandates don’t eclipse, replace or distract from investments in equal access.

First, the supply side issues, despite mounting pressure, continue to haunt the world. Stark inequities remain in global Covid-19 vaccination coverage. This is largely because the knowledge and technology to scale up production of safe and effective Covid-19 vaccines lies in the control of a handful of powerful governments and pharmaceutical companies that have failed to share that power or to temporarily waive intellectual property protections on the vaccine recipes.

The result is that while nearly 60 percent of the people in high-income countries are vaccinated, fewer than three per cent in poor countries are.

Second, it’s critical to remember that availability does not mean accessibility. For example, in the US and the UK, where vaccines are abundant, significant disparities along race and socio-economic lines persist. Systemic racism and structural injustices such as discrimination in healthcare settings skews access and uptake.

In Washington DC, the US capital, Kaiser Family Foundation data shows that while Black people make up 46 per cent of the population, they have received only 43 per cent of vaccinations, but account for 56 per cent of cases and 71 per cent of deaths. The pattern is repeated in other states where data are available.

Analysis of 20 million patient records in the UK revealed that while 95 per cent of people over 50 in the most affluent parts of the country had received a vaccine by mid-August, that coverage dropped to 88 per cent in the poorest areas.

Any vaccine mandate should account for and address these disparities or it risks inefficacy and violating people’s rights. If a mandate is put in place without sustainable, targeted and effective outreach, we’ll get more of the same – entrenched disparities and poor understanding of how to overcome our current, ongoing battles with Covid-19 and its variants.

In international law, the right to health includes an obligation to prevent and control epidemic disease, for which widespread vaccination is an important tool. And the right to health applies to everyone – whether vaccinated, clamouring for a vaccine, considering it, or facing barriers to getting one.

Vaccine mandates should be designed with deep attention to context – including the social, political, and economic barriers people might face.

“Mandates risk appearing as a ‘quick fix’ rather than addressing known social determinants of health.”

Many of the same conditions that made life difficult before and during the pandemic – job loss, poverty, lack of health insurance or primary care physicians – will also impact vaccine access unless specific measures are designed to fill these gaps.

Community-led efforts to promote and provide vaccines are improving coverage among socially marginalised communities and the people governments have failed to support with paid time off and accessible healthcare. These communities deserve sustained support. We need to do more of this.

History has been wrought with distrust over the intent and justifications for vaccination campaigns. “Vaccine hesitancy” is as old as vaccines themselves, and the logic behind it is highly contingent on local conditions.

A 1996 clinical trial for a Pfizer antibiotic to treat meningitis caused an uproar and eroded trust in Western-manufactured vaccines as communities protested harm to children who participated in the trial and sued the company. Pfizer settled the suit, but the company claims the negative health outcomes were a result of meningitis, not the medication.

In 2012, in Carmen de Bolívar, northern Colombia, some groups of adolescent girls who had received the HPV vaccine reported patterns of worrying symptoms. The government’s insistence – based on a scientific investigation – that it was all psychological and unrelated to the vaccine resulted in diminished uptake not only of HPV vaccines but of others as well.

In South Africa, where the government was considering a Covid-19 vaccine mandate before deciding against it, officials have been working with civil society organisations to conduct “social listening” sessions about vaccine concerns in communities across the country.

Familiar sinews of distrust are emerging; one social listening report, for example, recorded a citizen saying, “The ANC [South Africa’s ruling party] can’t bring us water in Limpopo but can bring us vaccine? Something is fishy.”

It may feel easy to dismiss these statements as sloganeering. Indeed, anti-vaccine disinformation, largely fuelled by unscrupulous doctors, politicians, and lay people, undermines people’s rights to information and to enjoy the benefits of science. But just as anti-vaccine messaging isn’t uniformly convincing, neither are vaccine mandates a magic bullet.