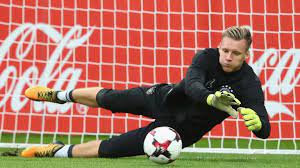 The Germany international has enjoyed the Gunners’ number one spot for the majority of his time since signing in 2018. However, this summer, the landscape has shifted considerably towards the future. Indeed, new signing Aaron Ramsdale, 23, has replaced Leno, 29, between the sticks.

In fact, the former Sheffield United man has played three Premier League games in a row, including the 1-0 win over Norwich, which started Arsenal’s recent revival.

Reports claimed that Arteta promised Leno that Ramsdale’s introduction would allow him a break. The manager supposedly added that he would reinstate Leno for Sunday’s clash with Tottenham. But Ramsdale continued in goal for the 3-1 north London derby win. As such, Bild, who broke the report detailing Arteta’s discussion with Leno, interviewed the goalkeeper.

He said (via Sport Witness): “There was no clear reason why I was out, but it had nothing to do with my performance. He [Arteta] is the trainer, he decides. Of course, it’s difficult for me.”

Concurrent reports have claimed that Arsenal are looking to move Leno on as they look to the future. Indeed, the goalkeeper could leave in the January transfer window. Leno will have one year left on his contract at the end of the season, so a sale next summer would also work. Still, they would want to take one of those two opportunities to avoid losing him for free.

As for who could sign him, Inter have had previous links. The Daily Mail has reiterated in a fresh report that the Serie A champions, who are looking to replace 37-year-old Samir Handanovic, have now registered fresh interest.

“London is very nice; Milan is not bad either and closer to my home Stuttgart,” Leno added. “But I’m not seriously thinking about that yet. I feel comfortable at Arsenal and in London.

“Only if nothing changes in my situation by winter would I have to think about things: what option do I have, how can I continue? But I’m concentrating on my work in training; I can’t commit to anything else at the moment.”

Nevertheless, Ramsdale has impressed in his time between the sticks so far.