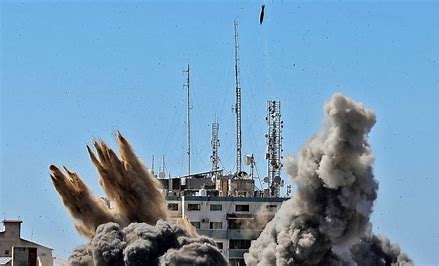 Was $735 million US arms sale to Israel meant for ongoing carnage in Gaza?

Some United States legislators are questioning whether a $735 million approved weapons sale to Israel by President Joe Biden’s administration could be used as leverage amid the continuing bombardment of the Gaza Strip, according The Washington Post has reported.

The arms sale, which Congress was notified of on May 5, a week before the current Israel-Palestinian escalation began, includes Joint Direct Attack Munitions (JDAMs), which are used to turn bombs into precision-guided missiles, according to the newspaper.

Some legislators and aides said the sale could prompt a groundswell of opposition in Congress, where criticism of the Biden administration’s support of Israel amid the deadly confrontation has become more prevalent.

“Allowing this proposed sale of smart bombs to go through without putting pressure on Israel to agree to a ceasefire will only enable further carnage,” a legislator on the House Foreign Affairs Committee told the newspaper.

Under US law, the administration is required to notify Congress of such sales. Legislators then have 20 days to pass a resolution opposing the sales.

Hamas and other armed groups began firing rockets at Israel on Monday of last week, following protests over the impending forced expulsion of Palestinians from the Sheikh Jarrah neighbourhood in East Jerusalem, and resulting raids by Israeli security forces at the Al-Aqsa Mosque compound.

On Monday, US Secretary of State Antony Blinken, speaking at a news conference in Copenhagen, Denmark, urged all parties to ensure the protection of civilians and repeated that Israel has an extra burden to do everything in order to avoid civilian casualties.

Blinken added that he has not seen any Israeli evidence of Hamas operating in the Gaza building that housed residences, offices and media organisations – including Al Jazeera and the Associated Press – that Israel hit on Saturday. Blinken says he has asked Israel for justification for the strike.

Still, the Biden administration has continually stressed Israel’s right to “self-defence” amid the violence, while repeatedly vetoing a United Nations Security Council joint statement that would condemn Israel’s actions and call for a ceasefire.

The stance has garnered criticism from some in the Democratic Party who charge that Biden is overlooking Israeli abuses in favour of the longstanding alliance.

Beyond arms sales, the US provides about $3.8 billion in annual aid to Israel. That aid, unlike to other countries, is not conditional on Israel’s human rights records.

A cadre of progressive legislators within the Democratic Party has increasingly questioned the US support, once considered sacrosanct.

Still, several congressional aides told the Washington Post that even if a resolution is introduced to oppose the most recent arms sale, it is unlikely to garner enough support to pass.