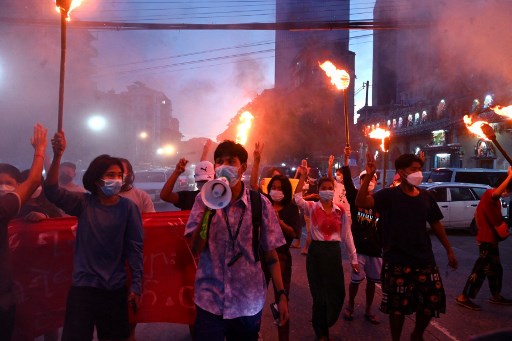 Sithy Aung Myint, a political analyst for Voice of America and Frontier Myanmar, and BBC Media Action senior producer Htet Htet Khaing, were arrested by police and taken to a Yangon interrogation centre on August 15.

The International Federation of Journalists (IFJ) has called upon the State Administrative Council to release Myint and Khine.

Police arrested Myint, Khaing and two other people at 10 pm during a raid on Myint’s apartment at Thri Mon Einyar in Bahan township, Yangon. Police threatened Myint and the others to open their door and switch on their laptops.

Authorities reportedly also threatened people in the area to turn a blind eye to the arrest. Police are holding the two journalists at Shwe Pyi Thar interrogation centre in Yangon, known for torturing civil disobedience movement protestors and journalists.

The Myanmar military-appointed State Administration Council issued a summons for Myint’s arrest on April 24 under sections 505(a), which criminalises statements that undermine the conduct of military or government employees and 124(a) of Myanmar’s Penal Code, prohibiting disloyalty or contempt towards the government and military.

Policed charged Khaing under section 17(1) of the Unlawful Associations Act prohibiting membership or taking part in an unlawful association.

Section 15 of the Unlawful Associations Act defines an unlawful association as an association which “encourages or aids persons to commit acts of violence or intimidation, or of which the members habitually commit such acts.”

The IFJ said in a statement, “The arrest of Sithy Aung Myint and Htet Htet Khaing is a blatant attempt to stifle press freedom in Myanmar. The IFJ condemns the arrests and calls for the military to recognise the importance of objective media and allow media workers to carry out their respective duties safely without fear of arrest or harassment.”