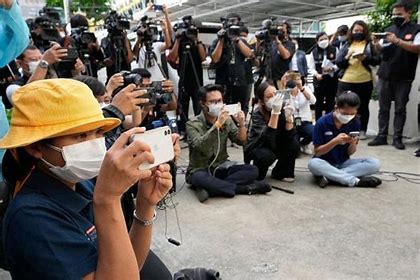 Thailand’s government has implemented a new regulation under Section 9 of the Royal Decree on Public Administration in Emergency Situations that prohibits any supposed distortion of information that causes misunderstanding during an emergency situation.

The International Federation of Journalists condemns the new regulation and urges the Thai government to repeal it immediately as it restricts freedom of expression.

The introduction of the new set of measures that became effective on July 12 and criminalised the “distortion of information and news…that contains messages that incite fear in the public, or intentionally distort information to create misunderstandings in emergency situations that impact state security, peace and public morality.”

According to Thailand’s government, the new measures were brought in to curb the latest wave of Covid-19 in the region. Violations of this regulation can lead to a fine of 40,000 baht and/or two years imprisonment.

Six Thai media associations, including affiliate, the National Union of Journalists Thailand, issued a joint statement on July 15 calling upon the government to amend these new measures or to clarify the intentions of the measures so as to prevent the censorship of media coverage that detains freedom of expression.

The statement was ignored by the government and was followed by a message on Facebook from Prime Minister Chan-o-cha on July 27 that urged authorities to strictly enforce the new measures against those breaking the new regulation.

In response to this, the six media association said, “We also urge the media establishment to take utmost care to ensure that their news coverage is accurate and compliant with the highest journalistic standards…in order to deny the government any excuse to interfere with media operations, which will in turn affect the public’s right to information.”

The IFJ said, “This new regulation is unwise and subjective. It will stifle freedom of expression in Thailand. The IFJ urges the government to adhere to the suggestions made by Thailand’s combined media associations in order to ensure that journalists can continue to report without fear of conviction. This is more important than ever as covid cases rise dramatically across Thailand and access to information becomes an essential tool for guaranteeing public safety.”