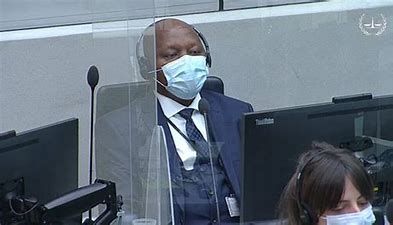 A Kenyan lawyer went on trial on Tuesday at the International Criminal Court charged with bribing and threatening prosecution witnesses so that they would withdraw their statements in a case that ultimately collapsed amid widespread witness interference.

As his trial opened, Paul Gicheru pleaded not guilty to all eight counts of interfering with witnesses. Deputy Prosecutor James Stewart said the case sends an important message about the court protecting its ability to mete out justice for atrocities around the world.

“We seek to preserve and strengthen public confidence in the court and the expectations of those who look to the court to establish the truth and deliver justice,” Stewart said in his opening statement. “Those who would seek to undermine the court’s ability to provide redress for the victims of mass atrocities cannot be allowed to prevail. They must be held accountable.”

Prosecutors allege that Gicheru was part of a group of co-conspirators that approached prosecution witnesses and offered them money to recant their evidence and withdraw from the case against William Ruto, who is now Kenya’s deputy president, and a broadcaster, Joshua Sang. ICC judges declared a mistrial in their case in 2016.

The most egregious and damaging instance of such witness interference with the accused Paul Gicheru allegedly at its center commenced in early 2013 and continued throughout the trial,” Stewart said.

Ruto and Sang were among a group of Kenyans, including the country’s current president, Uhuru Kenyatta, charged with involvement in violence that erupted after a disputed presidential election in 2007, leaving more than 1,000 dead and forcing 600,000 others from their homes. Charges against all the Kenyans were ultimately dropped.

Ruto was defended during his trial by Karim Khan, the British lawyer who is now the ICC’s prosecutor. Khan has recused himself from the case against Gicheru.