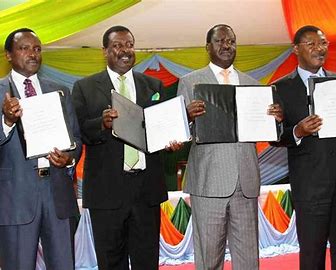 Tale of Kilkenny cats: How Kenya opposition was captured by the state

Often hurriedly assembled to the sole purpose of winning elections, political coalitions in Kenya have never had a façade of ideology, but regional or ethnic conglomerations that come off the hinges as rapidly as they were crafted once elections are over.

As the row among former National Super Alliance (Nasa) coalition deepens, the electorate is getting a clearer picture of the inner workings pre-election coalitions that are never fostered by ideology, but narrow personal interests. When the chips are down the obvious strange bedfellows tear into each other like the proverbial Kilkenny cats.

This is the story of the “defunct” Nasa coalition. After nearly three years of thinly veiled disagreements, former Nasa leader Raila Odinga kicked off a storm when announced he would never put his money on his former three allies – Amani National Congress party leader Musalia Mudavadi, Wiper party leader Kalonzo Musyoka and Ford Kenya’s Moses Wetang’ula – for the 2022 presidency, berating them a “cowards.”

At issue is the trio’s refusal or failure to take part Raila’s mock swearing-in on that had the hallmarks of treason. The three in response allege his “swearing-in” on January 31 at in Nairobi’s Uhuru Park was a tactic to sanitise a deal the opposition leader had entered with his rival in 2017 presidential election Uhuru Kenyatta to be allowed to put his hand in the cookie jar.

In issuing the salvo, Raila, who two years ago made up with his opponent in the 2017 presidential election got more than what he bargained for: the trio are on the offensive and it is set to get nastier in the lead up to the next elections in 2022.

Now with gloves off, the bickering has given credence to what has long been suspected – but which no one could admit on record – that the coalition was undermined by personal greed that has also been cited in the controversy that followed the 2007 and 2013 contested presidential election.

With Odinga and his former allies going hammer and tongs at each other, Mudavadi let the cat out of the bag: the Nasa presidential candidate had cut a deal with incumbent, President Uhuru Kenyatta to “lose” the election, then negotiate ‘compensation’ that came in the form of a “truce” under the guise of a “handshake”. He claims Raila pulled out of the repeat presidential elections after negotiating the handshake with Uhuru.

Mudavadi avers that the “illegal swearing-in to accelerate his yearning for a handshake” with President Uhuru Kenyatta.

“But there is more cowardice to pull out of a repeat election, disguised as protest of pre-rigged outcome, when in actual fact it’s only because the act is part of a pre-arranged settlement for yourself.”

Although the political adversaries would not openly talk about it, Tell can reveal, the issue at the centre of the controversy is how Nasa financed its presidential campaign. Mudavadi, Kalonzo and Wetangula accuse Raila of piggybacking, hardly contributing a penny to the “journey to Canaan” – the pitch for his campaign.

During the election campaign, Raila cast himself as the anointed messiah to lead the Kenyan proletariat out of the Biblical Egypt to the proverbial Canaan. The mission was abandoned after the “handshake.”

A staffer at Amani National Congress party secretariat explained to Tell what transpired: “When Mudavadi asked him how he was going to finance his campaign, Raila promised he had the support of friends in Russia, Germany and the United States. However, when the coalition was sealed, Raila went back on his promise. It was left to Mudavadi to draw on his resources to keep alive a campaign that looked still-borne. It was Mudavadi who financed Raila campaign in 2007, but the ODM party leader has never shown gratitude.”

Mudavadi responded to Raila’s fusillade with a terse description of his erstwhile ally as a pathological liar and deceitful, and vowed never again to accept to support him “after he spent the only bullet he had in his (political) armoury.”

What makes the row between Raila and Mudavadi more intriguing is that in the 2007 and 2017 elections that many Kenyans believe Raila won, he was backed by Mudavadi. However, ODM secretary-general has stated the falling-out in Nasa will not affect Raila’s appeal in Mudavadi, Kalonzo and Wetangula strongholds.

Asked to shed light on the subject and the genesis of the breakup of Nasa, Mudavadi spokesman Kibisu Kabatesi recalled how Raila – allegedly – duped the trio into a coalition.

“Two things first. One to win Nasa ticket Raila, lied he had funding from his foreign networks. But as the campaign began limping, there was no money to spend. Two, Jimmi Wanjigi (who had) promised to fund the campaign, never did,” Mr Kabatesi says.

The spokesman explains further that “Mudavadi spent (personal) billions on facilitating the national campaign committee that he chaired, and its structures at the grassroots. He housed the committee at the current Musalia Mudavadi Centre (in Nairobi), where the campaign was coordinated. Nasa would have spent millions in hiring hotel space for the purpose.”

The ANC leader went further and facilitated Raila operations of the campaign secretariat without the input of the presidential candidate. He also provided Raila with two campaign helicopters which he fuelled and serviced without a dime from Raila or his ODM party, says Kabatesi.

“That would have cost millions of shillings if Raila were to hire choppers. Mudavadi also paid for training of agents. Most agents were not, however, deployed for lack of money. The little available was misappropriated by ODM secretariat staff. In some places, Nasa used reluctant agents of Members of Parliament, governors and members of county assembly candidates. Poll watch was zero because Raila expected Mudavadi to meet the cost,” Kabatesi explains.

Asked for comment on the row in Nasa, ODM director of communications Philip Etale was tongue-tied.

“I don’t know to say. The issues are beyond me. I will call you when I get out where I am and feel ‘safe’ to talk to you,” Etale promised. He, however, did not keep his promise.

However, ODM secretary for ideology Wafula Buke described the row as unwarranted, saying the role Raila’s co-principals deserved respect from ODM and its leadership.

“For God’s sake, Musalia Mudavadi opted to remain jobless to focus on Raila’s presidential campaign and refused to push for the running mate slot to allow Kalonzo to broaden our fishing net. How dare you Sifuna urinate on that with juvenile rantings?” Buke, a former political detainee responded.

He added, “Raila Odinga is not diplomatic and issue-based in engagements with his estranged allies for nothing, he appreciates the contribution and sacrifice of the two. By the way Edwin, do you know the cost of hiring a helicopter? Find out boy. Musalia gave us for free.”

Kabatesi confirms that Mudavadi was angry with Raila after he controversially expressed reservations about the need to participate the rerun poll. Indeed, when he responded to Raila’s charge of “cowardice” Mudavadi was forthright that as other Nasa top brass discussed how to approach the repeat presidential election, Raila was involved in clandestine negotiations with President Kenyatta to concede defeat.

As the row among Nasa principals deepened, Mudavadi derided Raila as the “biggest political burden to the people of Kenya.” Beneath the tirade is the perception that the ODM leader has never been keen on winning the presidency, uses politics for personal aggrandisement.

Although he is regarded as one of the top 10 richest Kenyans but it is time-tested fact that he never spends personal resources on his political campaigns, even when he was a member of parliament.

“This outburst must be seen in the context of a jilted lover, a parasite abandoned by its long-suffering host. Musalia is easily the biggest baggage our party leader has had to carry since 2002. Now that Raila has taken away that support, Musalia needs to be a man,” Raila said in a statement signed by Sifuna.

Buke, thinks it is risky for ODM to burn bridges with former allies. He observes, “Kalonzo Musyoka, Musalia Mudavadi gave us their all at the campaign phase. Have these guys (ODM leadership) forgotten how Ukambani has voted for Baba (Raila) in the past elections? Sifuna, the dictionary has better words than the word ‘parasite’. In any case, between you and the two, who is a real parasite? You are the first salaried secretary-general paid by cash courtesy of strength donated to us by the three.”