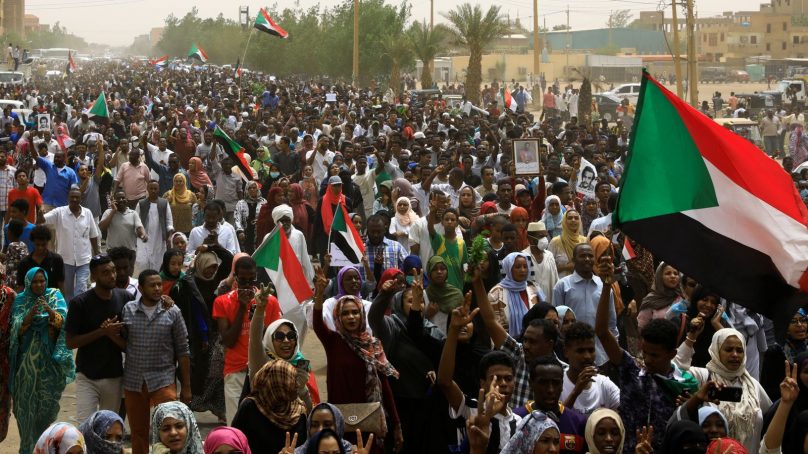 Hundreds of thousands of Sudanese protesters rallied Sunday for a civilian-led transition to democracy, three years since the start of mass demonstrations that led to the ouster of veteran strongman Omar al-Bashir.

Security forces fired tear gas and live rounds into the air to try to disperse protesters near the presidential palace in Khartoum, leaving scores wounded, according to medics. Demonstrators approaching the palace gates had chanted slogans against military chief General Abdel Fattah al-Burhan, who led the October 25 coup.

“The people want the downfall of Burhan,” the protesters shouted as additional security forces were deployed to surround the swelling crowd. In the evening, demonstrators declared they would hold a sit-in similar to the one that eventually toppled Bashir.

A barrage of teargas rained down on the crowd of several thousand after the announcement, an AFP journalist said. Some 123 people were injured in Khartoum, its twin cities of Bahri and Omdurman and the eastern city of Kassala, according to the Sudanese health ministry.

Medics affiliated with the protest movement accused security forces in a statement of using live bullets and heavy tear gas to disperse the sit-in, assaulting protesters and stealing their personal property. They also accused them of encircling hospitals and firing tear gas at the entrances.

There was no immediate statement from police. Sudan’s generals in the post-Bashir transition government launched their coup almost two months ago and held Prime Minister Abdalla Hamdok under effective house arrest for weeks but reinstated him on November 21.

The move alienated many of Hamdok’s pro-democracy supporters, who dismissed it as providing a cloak of legitimacy for Burhan’s coup.

“Any coup, even after the reinstatement of Hamdok, is unacceptable,” a protester in his 20s told AFP as thousands waving Sudanese flags marched past him.

Hamdok, who has argued he wants to avoid further bloodshed, warned late Saturday of “the country’s slide toward the abyss”, urging restraint from the protesters.

“We’re facing today a sizeable regression in the path of our revolution that threatens the security of the nation, its unity and its stability,” the premier said.

However, protest organisers have vowed, in a key slogan, that they want “no negotiation, no partnership and no legitimacy” for the current leadership. Another demonstrator, in his early thirties and also draped in a Sudanese flag, said: “I came out today in complete refusal of the political agreement!

“This deal doesn’t represent the people. We have one demand and that’s a civilian government, not one that ends up being under military control.”

Previous protests against the military takeover have been forcibly dispersed. Nationwide, at least 45 people have been killed and scores wounded in the past two months, according to the independent Doctors’ Committee.

Authorities on Sunday shut off bridges linking the capital with its twin city Omdurman, but large crowds still gathered and crossed despite heavy tear gas.

“The numbers are huge and security forces can’t control them,” said one man who witnessed the protests in Omdurman.

The date December 19 has a particular resonance in Sudanese history. Not only was it the day in 2018 when thousands launched mass protests that months later ended Bashir’s three decades in power, it was also the day in 1955 when Sudanese lawmakers declared independence from British colonial rule.

“The coup has put obstacles in the way of the democratic transition and has given the military complete control over politics and the economy,” Ashraf Abdel-Aziz, chief editor of the independent Al-Jarida newspaper, told AFP.

Sudan’s military dominates lucrative companies in sectors from agriculture to infrastructure. The prime minister said last year that 80 percent of the state’s resources were “outside the finance ministry’s control”.

“The security apparatus has won out over political institutions,” Abdel-Aziz said.

Khaled Omer, a minister in the ousted government, said the coup was a “catastrophe” but also “an opportunity to rectify the deficiencies” of the previous political arrangement with the army. He warned that anything could happen over the next few months with the military still firmly in power.

“If the main political actors don’t get their act together and the miliary establishment doesn’t distance itself from politics… then all scenarios are on the table,” Omer said.

The November 21 agreement also set July 2023 as the date for new elections. Hamdok said he partnered with the military to “stop the bloodshed” that resulted from its crackdown on protests, and so as not to “squander the gains of the last two years”.