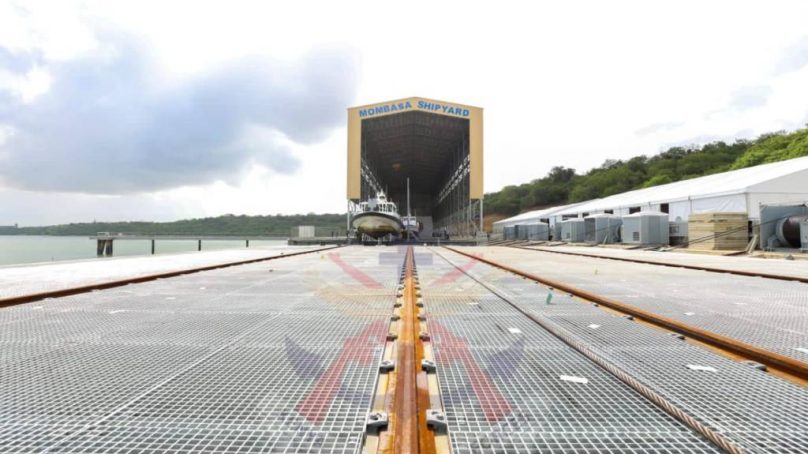 Kenya’s blue economy has been boosted by the recent commissioning of the Kenya Shipyards Limited (KSL) Mombasa Shipyard.

The shipyard, billed as the largest in Africa south of the Sahara, comprises a 4,000-tonne slipway for shipbuilding activities that include refitting of vessels operated by the Kenya Navy, government agencies and private operators was commissioned by President Uhuru Kenyatta on December 17, 2021 at the Kenya Navy Base, Mtongwe, Mombasa.

Launched in May this year by President Kenyatta in lakeside town Kisumu, in western Kenya, KSL was established as a part of government efforts to expand the contribution of the blue economy to Kenya’s socioeconomic transformation.

The agency has a broad mandate of catalysing ship-building activities in eastern Africa. Kenyatta hailed the 4,000-tonne slipway as a gamechanger in Kenya’s emerging ocean and blue economy.

“The direct, indirect and induced impacts of the Mombasa Shipyard will create many jobs, generate diverse investment opportunities and raise revenue for the country. The key sub-sectors of the blue economy, which include maritime transport and logistics, fisheries, as well as ship-building and repair, represent low hanging fruits that must be exploited,” Kenyatta said.

The first assignment for the new Mombasa Shipyard will be the refitting of the Kenya Navy tanker KNS Shupavu.

Besides the Mombasa Shipyard, KSL operates the Kisumu Shipyard where it is constructing MV Uhuru II wagon ferry. In capital, Nairobi, KSL is rehabilitating 31 Kenya Railways locomotives, according to a statement released by State House on December 17.

Kenyatta was joined in Mombasa by former Prime Minister Raila Odinga and Defence Cabinet Secretary Eugene Wamalwa, was taken on a guided tour of the Shipyard by the Chief of the Kenya Defence Forces General Robert Kibochi.

Mombasa Shipyard was developed in partnership with Damen Group, a Dutch defence, shipbuilding, and engineering conglomerate company based in Gorinchem, South Holland, the Netherlands.

Kenyatta applauded the Kenya Defence Force and its partner Damen for delivering the shipyard on budget and ahead of schedule.