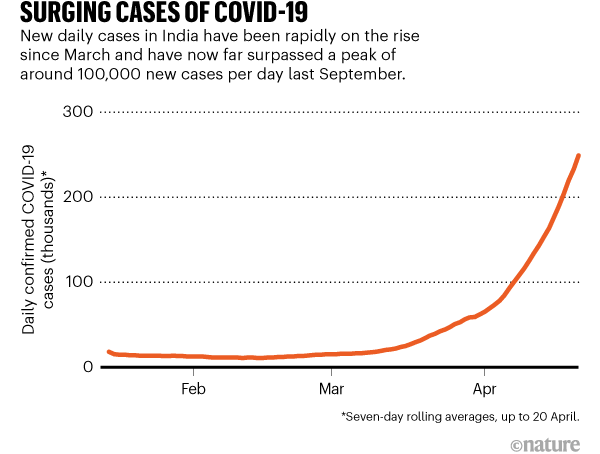 The coronavirus pandemic is sweeping through India at a pace that has staggered scientists. Daily case numbers have exploded since early March. The government reported 273,810 new infections nationally on April 18. High numbers in India have also helped drive global cases to a daily high of 854,855 in the past week, almost breaking a record set in January.

Just months earlier, antibody data had suggested that many people in cities such as Delhi and Chennai had already been infected, leading some researchers to conclude that the worst of the pandemic was over in the country.

Researchers in India are now trying to pinpoint what is behind the unprecedented surge, which could be due to an unfortunate confluence of factors, including the emergence of particularly infectious variants, a rise in unrestricted social interactions, and low vaccine coverage.

Untangling the causes could be helpful to governments trying to suppress or prevent similar surges around the world.

European countries such as France and Germany are also currently experiencing large outbreaks relative to their size, and nations including Brazil and the United States are reporting high infection rates at around 70,000 a day. But India’s daily totals are now some of the highest ever recorded for any country, and are not far off a peak of 300,000 cases seen in the United States on January 2.

Covid-19 case numbers started to drop in India last September, after a high of around 100,000 daily infections. But they began to rise again in March and the current peak is more than double the previous one.

“The second wave has made the last one look like a ripple in a bathtub,” says Zarir Udwadia, a clinician-researcher in pulmonary medicine at P D Hinduja Hospital & Medical Research Centre in Mumbai, who spoke to Nature during a break from working in the intensive-care unit. He describes a “nightmarish” situation at hospitals, where beds and treatments are in extremely short supply.

Shahid Jameel, a virologist at Ashoka University in Sonipat, agrees that the intensity of the current wave is startling. “I was expecting fresh waves of infection, but I would not have dreamt that it would be this strong,” he says.

Studies that tested for SARS-CoV-2 antibodies – an indicator of past infection – in December and January estimated that more than 50 per cent of the population in some areas of India’s large cities had already been exposed to the virus, which should have conferred some immunity, says Manoj Murhekar, an epidemiologist at the National Institute of Epidemiology in Chennai, who led the work.

The studies also suggested that, nationally, some 271 million people had been infected – about one-fifth of India’s population of 1.4 billion.

These figures made some researchers optimistic that the next stage of the pandemic would be less severe, says Ramanan Laxminarayan an epidemiologist in Princeton University, New Jersey, who is based in New Delhi. But the latest eruption of Covid-19 is forcing them to rethink.

One explanation might be that the first wave primarily hit the urban poor. Antibody studies may not have been representative of the entire population and potentially overestimated exposure in other groups, he says.

The antibody data did not reflect the uneven spread of the virus, agrees Gagandeep Kang, a virologist at the Christian Medical College in Vellore, India. “The virus may be getting into populations that were previously able to protect themselves,” she says.

That could include wealthier urban communities, in which people isolated during the first wave but had started mingling by the second.

But some researchers say that the speed and scale of the current outbreak suggest a new ingredient: emerging variants of the virus.

Udwadia has anecdotally observed that entire households are now getting infected – unlike in the first wave of Covid-19, when single individuals would test positive. He attributes this to the presence of more-infectious variants. “If one person in the family, has it, I can guarantee that everyone in the family has it,” he says.

Genomic surveillance data show that the variant B.1.1.7, which was first identified in the United Kingdom, has become the dominant form of the virus in the Indian state of Punjab.

And a new and potentially concerning variant first identified in India late last year, known as B.1.617, has become dominant in the state of Maharashtra. B.1.617 has drawn attention because it contains two mutations that have been linked to increased transmissibility and an ability to evade immune protection.

It has now been detected in 20 other countries. Laboratories in India are trying to culture it to test how fast it replicates and whether blood from vaccinated individuals can block infection, says Jameel.

The situation in India looks similar to that late last year in Brazil, he adds, where a resurgence of Covid-19 in the city of Manaus coincided with the spread of a highly transmissible variant known as P.1, which might have been able to evade immunity conferred by infections with earlier strains.

But others say that the existing sequencing data are not sufficient to make such claims. “As the numbers of sequences available are low, relative to the number of cases in India, we do need to be cautious,” says David Robertson, a virologist at the University of Glasgow, UK.

Some say that emerging variants account for only a small part of India’s surge in infections. In many regions that are experiencing outbreaks, they don’t make up the majority of genomes sequenced, says Anurag Agrawal, director of the CSIR Institute of Genomics and Integrative Biology in New Delhi.

Srinath Reddy, an epidemiologist and head of the Public Health Foundation of India in New Delhi, argues that people letting their guards down is a bigger driver. “The pandemic resurfaced in a fully open society where people were mixing and moving and travelling,” he says.

With cases declining after last September’s peak, “there was a public narrative that India had conquered COVID-19”, says Laxminarayan. In recent months, large crowds have gathered indoors and outdoors for political rallies, religious celebrations and weddings.

The nationwide vaccination campaign, which kicked off in January, might even have contributed to an uptick in cases, if it caused people to ease public-health measures. “The arrival of the vaccine put everyone into a relaxed mood,” says Laxminarayan.

More than 120 million doses have been administered, mostly of an Indian-produced version of the Oxford-AstraZeneca vaccine called Covishield. But that’s less than 10 per cent of India’s population, so there is still a long way to go. In particular, India needs to ramp up vaccinations in the hardest-hit regions, says Kang.

Some people might have become infected while getting vaccines, says Udwadia, because crowds often share clinic waiting areas with ill people who are waiting to be seen.