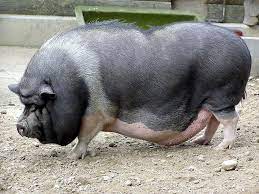 The first genetically engineered pig products could soon be coming to a dinner plate – or pharmacy – near you. Late last year, the US Food and Drug Administration (FDA) authorised a facility in northern Iowa to raise hogs that lack the gene needed to produce galactose-α-1,3-galactose (α-Gal), a sugar molecule found naturally on the surface of porcine cells.

Trademarked under the name ‘GalSafe’, the pigs could now provide a source of meat for people who develop tick bite-induced allergic reactions to the sugar, a condition known as α-Gal syndrome. By-products of pork production could also be harvested to make allergy-free pharmaceuticals and medical implants. The porcine tissue could help overcome deficiencies in the donor supply of skin and nerve grafts.

The pigs were never made with any of those applications in mind, though. In the early 2000s, following failed attempts to use unmodified porcine tissue for skin grafts, pancreatic islet cell transplants and outside-the-body blood perfusions, David Ayares and his colleagues at Scotland’s PPL Therapeutics used a combination of recombinant DNA and cloning technologies – first described in Nature Biotechnology – to create the pigs as a source of solid organs for pig-to-human xenotransplantation.

Soon thereafter, PPL spun out Revivicor as a standalone company. Revivicor, now a subsidiary of United Therapeutics, is still angling to transplant pig kidneys and hearts into human patients – just not with GalSafe-derived organs.

According to Ayares, who serves of CSO of Revivicor, the company is hoping to launch clinical trials with organs from more elaborately engineered pigs within the next year or two. And he views the landmark approval of first genetically modified pigs as “an important stepping-stone” toward that goal.

“All the pieces that went into the FDA approval of the GalSafe pigs”—safety evaluations, environmental impact assessments, molecular characterisations of the genetic alteration—“those same pieces are going to be required” for approval of other engineered pigs intended for xenotransplantation purposes, he says.

The regulatory path is thus better defined now – and not just for Revivicor. Other xenotransplantation companies and academic groups hope to build on Revivicor’s success with the FDA to advance their own modified pigs and cross-species transplant products. Some companies are also partnering with Revivicor to develop GalSafe-based products for burns and peripheral nerve injury.

Axonova Medical, for example, uses neurons from GalSafe embryos as the starting material for the company’s tissue-engineered nerve grafts. Earlier this year, research director Kritika Katiyar and her colleagues reported that the grafts elicited axon regeneration in rats. Pig-to-pig studies are planned next.

Meanwhile, XenoTherapeutics, the company behind the first human trial of tissue from a genetically engineered porcine donor had previously used skin from a different α-Gal-deficient pig – miniature swine bred by Immerge BioTherapeutics, a rival to PPL, in the early 2000s – to provide temporary wound closure for patients with severe burns.

According to XenoTherapeutics co-founder and CEO Paul Holzer, that six-person, Phase One trial “truly went better than I could have hoped for,” and the company plans to apply for accelerated approval on the basis of the small study’s unpublished results later this year. However, it may seek approval with GalSafe skin, rather than the miniature swine hide, now that the Revivicor animals have passed regulatory muster.

The GalSafe pigs are also larger and more fecund than the miniature swine, thus offering more tissue for transplantation.

Although Revivicor has no plans to commercialise the GalSafe pigs themselves, Ayares says his team is looking for more licensing opportunities with partners interested in selling allergy-free pork or pig derivatives. For people living with α-Gal syndrome, a group that counts at least 34,000 individuals in the United States alone, such food products, if made available for purchase, would be a “game-changer,” says Scott Commins, an allergist at the University of North Carolina-Chapel Hill, who specialises in treating the condition.

“The food use is part of the story,” Commins says, “but in my mind it’s arguably not as important as the other medical and implantable uses of the GalSafe pig.”

“The food use is part of the story, but in my mind it’s arguably not as important as the other medical and implantable uses of the GalSafe pig.”

Still, any implantable product more elaborate than, say, a heart valve or short-term skin graft would need further genetic tweaks to prevent organ rejection. Some say only a couple more knockouts of pig carbohydrate antigens should do the trick.

But decades of painfully slow progress in large-animal transplantation studies suggest the elimination of a few pig glycans will be insufficient. More steps, such as introducing human transgenes or removing porcine endogenous retroviruses (PERVs) are likely to be needed to protect porcine kidneys, hearts, livers and lungs from injury in human recipients.

In the 1990s, following reports that PERVs embedded in the pig genome could take up residence in cultured human cells, many researchers and regulatory bodies worried about the potential infectious complications of pig-to-human transplants. This was an important concern – one of many regarding safety – that put the brakes on the field for most of the 2000s.

With the advent of CRISPR–Cas9, Harvard Medical School geneticist George Church, his former student Luhan Yang and their colleagues used gene editing to inactivate every single PERV in their first-generation pig. Yang’s logic: “If it’s safer and does not impact the health” of the pig, she says, why not get rid of the PERVs?

But other researchers think that step is unnecessary to progress to clinical xenotransplantation. “We have amassed a plethora of data” over the past 20 years, and “to date, on no occasion has anyone found any evidence that PERVs have caused infection in human recipients who have been exposed to xenotransplantation,” says Linda Scobie, a virologist who studies the safety of xenotransplantation at Glasgow Caledonian University, UK. “PERV is considered to be low risk and a more pressing concern is regarding unknown or emerging pathogens.”

Opinions differ, however, and the genetic sweet spot for the number of alterations to pig cells sufficient to support safe xenotransplantation remains a matter of intense scientific debate. “We have to find a balance between what’s just right and what’s too much and unnecessary,” Scobie says.