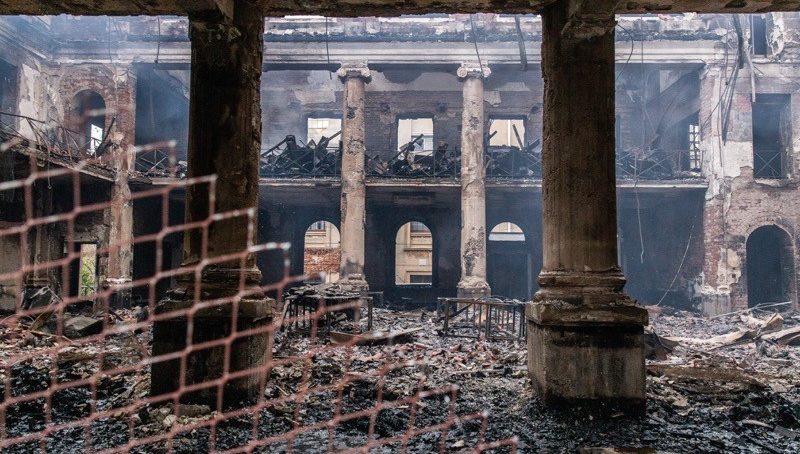 Forest fires raging in South Africa’s Table Mountain National Park have reached the University of Cape Town (UCT) and gutted the reading room of its main library, which houses irreplaceable documents and records from the country’s past.

Amid apocalyptic scenes on April 18, fire tore through part of the 200-year-old university’s campus on the slopes of Table Mountain, torching the library building and destroying a plant research unit.

Researchers have set up an online page asking for anyone with photos or digital scans of the library’s collections to upload them.

“This archive is special for all sorts of reasons and for me it’s because it includes collections which provide a record of the ordinary lives of ordinary people in the area — from working-class children to Black students attending night school,” says Sarah Emily Duff, a historian of South Africa based at Colby College in Waterville, Maine. “We lose that texture of everyday life and struggles with a catastrophe like this,” she adds.

Table Mountain, on the continent’s southwestern tip, often has fires in summer and autumn, but the university has been spared catastrophic damage in previous wildfires, says Howard Phillips, a UCT historian, now emeritus. “I am not aware of any other natural fire disaster having hit UCT so devastatingly,” he said.

The immediate cause of the wildfires is unknown. One theory suggests that an abandoned cooking fire on the mountain took hold, fuelled by unseasonably hot, dry weather. Cape Town police also confirmed the arrest of a suspected arsonist later that day, although it is not clear whether the individual is thought to have started the main fire or a smaller blaze on the mountain.

Around 150 firefighters arrived at the university and surrounding areas on the morning of the fire and fought the blaze until late evening. Overnight, the winds blew the fires away from the campus, but around 500 firefighters, including volunteers, were still battling the blaze the following day, when it was threatening residential areas in the city centre.

As thick smoke engulfed the campus, hundreds of students were evacuated from their residences. Some were put up in hotels that are largely empty because of the coronavirus pandemic.

Firefighters battle a blaze that destroyed the nearly 200-year-old Jagger Library on the University of Cape Town.

The library complex houses UCT’s Special Collections, which hold irreplaceable artefacts, including annotated watercolours of plants and animals dated from 1881, painted by Indigenous inhabitants of the Cape. It also holds maps, manuscripts and government records from the Cape’s mottled past, including its colonial and military history.

Automated shutters that had been installed to protect the library’s rarest items were activated by the fire, but it is not yet known whether they succeeded in stopping its spread from the reading room to the special collections nearby.

“Some of our valuable collections have been lost,” UCT libraries director Ujala Satgoor said in a statement. “However, a full assessment can only be done once the building has been declared safe and we can enter the building.”

The university’s botany building was also seriously damaged. In the Plant Conservation Unit, where researchers track changes in climate by studying fossilised pollen and comparing historical photos with current-day images, the “damage is total”, says the unit’s leader Timm Hoffman, a historical ecologist.

“We are locked out of the campus, but we’ve seen photographs. There’s nothing left; the entire unit has been destroyed,” he says. Most of the historical photos and slides lost in the fire will have been digitised, but some were still undergoing that process.

The unit’s fossil-pollen laboratory might be completely destroyed, says UCT palaeoecologist Lindsey Gillson. But the sediment cores from which the lost samples were taken were housed in a different, unharmed, part of the botany building.

The herbarium, which houses specimens from many of the Cape’s unique plants, is understood to have been spared – although it might have sustained water damage.

“We’ve lost computers and microscopes and the samples in the lab. Those are replaceable. I’m just happy nobody was in the lab,” Gillson says. “We’ve lost our home, but we haven’t lost our community.”