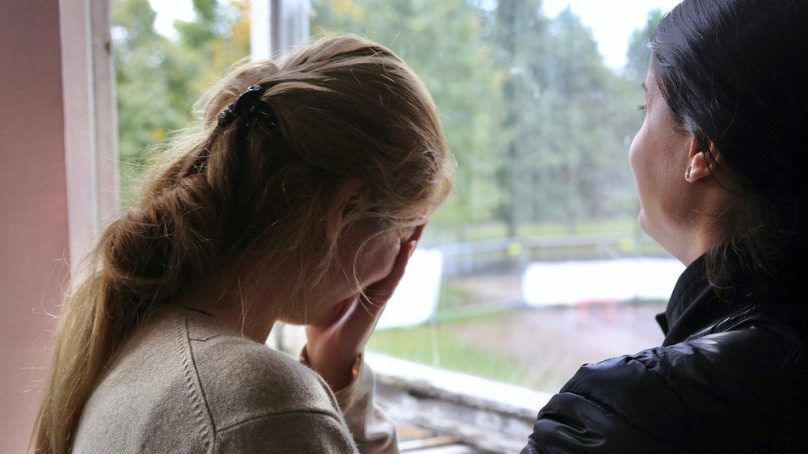 For weeks, a fast-evolving showdown between the European Union and Belarus has been fuelling a humanitarian crisis on Europe’s eastern border, with thousands of asylum seekers and migrants being used as pawns in a geopolitical dispute.

Tension escalated last week as somewhere between 2,000 and 4,000 asylum seekers and migrants were sleeping rough along the Poland-Belarus border in freezing temperatures. Belarusian security forces were reportedly directing them where to cross – even cutting through barbed-wire fences – and preventing those who wanted to turn back from leaving.

Meanwhile, Poland has declared a state of emergency and deployed 15,000 soldiers to the border region to prevent people from entering, leading to clashes.

In a sign that tensions may be easing, Belarus began moving asylum seekers and migrants on November 17 out of makeshift camps to temporary accommodation away from the border. The main border crossing between Belarus and Poland has now been cleared.

Belarus has also reportedly proposed a plan to return 5,000 asylum seekers and migrants to their home countries in exchange for the EU agreeing to take in 2,000 who have been stuck along the border.

Despite the seeming de-escalation, Western leaders remain sceptical that the crisis is drawing to a close.

The confrontation has been getting worse since July, when the number of asylum seekers and migrants entering EU member states Lithuania, Latvia and Poland from neighbouring Belarus suddenly began to increase.

Overall, the number of people involved is relatively low: the EU’s border agency, Frontex, counted just over 6,500 irregular border crossings on the EU’s eastern land borders between January and the end of October this year – although an unknown number of people have likely crossed without being detected.

Still, it’s a significant increase compared to previous years: Lithuania, for example, saw just 81 people irregularly cross its border from Belarus in 2020; this year the number has jumped to more than 4,000.

The EU accuses Belarus’ authoritarian president, Alexander Lukashenko, of using irregular migration to retaliate against the EU: following a 2020 election – widely viewed to have been rigged – the Belarusian leader violently cracked down on political opposition, prompting the EU to impose sanctions.

The EU issued another round of sanctions after Belarus scrambled fighter jets in May this year to force a Ryanair flight to land in the capital, Minsk, in order to arrest a dissident journalist.

Lukashenko’s attempt to leverage deep, internal EU divisions over migration policy to his political advantage – by providing would-be asylum seekers and migrants with visas to Belarus and pointing them towards to the EU’s borders – is reminiscent of manufactured crises on the Greek-Turkish border in February 2020 and on the border between Spain’s North African enclave of Ceuta and Morocco in May this year.

In both cases, the EU’s neighbours sought to extract political concessions or retaliate for policies they disliked by opening their borders and allowing asylum seekers and migrants through. The EU is now referring to the tactic as a form of hybrid warfare.

The situation along the EU’s eastern borders is further complicated by broader global alliances: Poland, Lithuania, and Latvia are NATO member states, while Lukashenko is backed by Russia. The tense situation on the border has raised fears – however unlikely – that it could develop into an armed conflict that could pull in Russia and the United States.

EU leaders are already saying that Russian President Vladamir Putin has had a hand in fomenting the crisis and should play a role in resolving it. And the United States is joining the EU in imposing new sanctions to punish individuals and companies involved in facilitating the movement of people to Belarus and towards the EU’s borders.

Stuck in the middle and bearing the brunt of the political confrontation are asylum seekers and migrants from the Middle East, Afghanistan and Africa. At least 12 people have died attempting to cross from Belarus into Poland since the furore began.

Iraqis – many from the Kurdistan region in the north – account for the majority of the people recorded by Frontex crossing the EU’s eastern border. Afghans and Syrians are the next largest nationalities, followed by people from the Republic of the Congo and Russia.

During two weeks in the southeast of Lithuania close to the border with Belarus in August and September, The New Humanitarian met people from the Middle East and sub-Saharan Africa who were being held in abandoned buildings that had been repurposed into makeshift camps for asylum seekers and migrants.

“We all took the same flight,” Dilbak, a 30-year-old member of the Yazidi ethnoreligious group from northern Iraq, said, gesturing towards the group of 20 other Yazidi women she was sitting with in an old school building turned camp.

The women were survivors of the Yazidi genocide, carried out by the so-called Islamic State (IS) after it took control of much of northern Iraq in 2014. Thousands of Yazidis were killed or enslaved by IS.

After northern Iraq was liberated from IS in 2015, Dilbak returned but still didn’t feel safe. When Iraqi travel agencies began promoting flights to Minsk and easy access to the EU in May this year, Dilbak said she and the other Yazidi women decided to try their luck without really thinking it through or having an understanding of the broader context.

“We went to Baghdad and bought a ticket through a travel agency,” Dilbak said. “We also booked a hotel for a few nights, and then a taxi that took us to the border.”

But after crossing the border, they were sent to the camp, where they had already been for two months at the time of The New Humanitarian’s visit. They have since been relocated to another camp close to the border with Belarus.