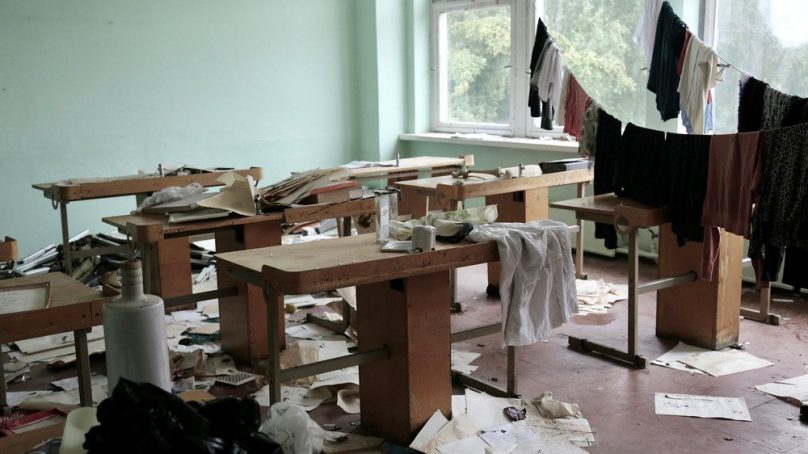 Many of the Iraqi refugees who have attempted to reach the European Union through from Belarus are from the Kurdish ethnic group that makes up the majority of the population in the north of the country. Along with people of other nationalities taking the route, many saw it as an easier and less dangerous way to reach Europe than routes through Turkey or Libya.

Until Belarus started clearing the camps near the border, hundreds – if not thousands – of people had been sleeping in flimsy tents with little access to food or water. Temperatures were freezing, and the makeshift camps were crowded and the air choked with smoke from heating and cooking fires.

The clearing of the camps sparked fears among asylum seekers and migrants that they may soon be deported from Belarus. Some had been stuck on the border for up to several weeks, attempting to cross and repeatedly being pushed back by Polish security forces.

On November 16, frustrated, desperate and reportedly egged on by Belarusian security forces, hundreds tried to rush a Polish border checkpoint and were met with water cannon and tear gas. Asylum seekers and migrants threw stones and debris, and a Polish police spokesperson said that Belarusian security forces had given smoke grenades to some of those trying to cross.

A state of emergency declared in September by Poland bars journalists and aid organisations from coming within three kilometres of the border. As a result, the job of providing humanitarian assistance on the Polish side has largely fallen to local volunteers, who are reportedly overwhelmed by the scale of the needs.

The EU has allocated €700,000 to be sent to the International Federation of Red Cross and Red Crescent Societies (IFRC) and the Belarusian Red Cross to provide humanitarian assistance to asylum seekers and migrants in Belarus.

Lithuania also declared a state of emergency on November 9 along its border with Belarus and in shelters for migrants and asylum seekers throughout the country. The number of people attempting to enter Lithuania has dropped off since early August, but the government cited the situation on the Poland-Belarus border when declaring the measure.

The state of emergency restricts the rights of people in shelters to communicate in writing or over the phone and allows security forces to use “proportional physical violence” to prevent asylum seekers and migrants from entering the country.

Since The New Humanitarian visited, asylum seekers and migrants in Lithuania have been moved to better accommodation, according to the Lithuanian Red Cross. “Currently, 93 percent of migrants live in heated buildings or modular houses… so we believe that at least adequate living conditions will be provided for the coming frosts and winter,” said Monika Alimienė, director of communications at the Lithuanian Red Cross.

Poland, Lithuania and Latvia have all taken a hard line to try to keep asylum seekers and migrants out – including by pushing them back into Belarus without allowing them to apply for asylum, according to rights groups.

Pushbacks are illegal under international and EU law, but Poland passed domestic legislation last month legalising the practice, which is condoned under Lithuania’s state of emergency.

Belarus’ EU neighbours are also quickly fortifying their borders with fences and plans to build walls to keep would-be asylum seekers and migrants out. Twelve EU states are calling on the bloc’s executive body, the EU Commission, to begin funding border walls – something it has been loath to do because of the history of walls on the continent.

After the uptick first began in July, the Lithuanian government amended the country’s asylum law. The changes have limited access to asylum procedures and made it easier for people to be held in detention, according to the European Council on Refugees and Exiles (ECRE), a network of refugee rights NGOs.

Out of 2,600 people whose asylum cases were heard through November 1, only six have been granted protection, according to the Lithuanian Ministry of Interior’s Immigration Department.

“This does not mean we will never grant asylum. We just have not found many true refugees yet,” Evelina Gudzinskaitė, head of the Immigration department, said.

Employees of the country’s asylum service, however, told local media they were under pressure to conduct shoddy asylum interviews and coerce people into “voluntarily” returning to their countries. Asylum seekers and migrants The New Humanitarian spoke to in Lithuania confirmed the pressure.

The migrants and asylum seekers interviewed for this article preferred to only use their first names for security reasons.