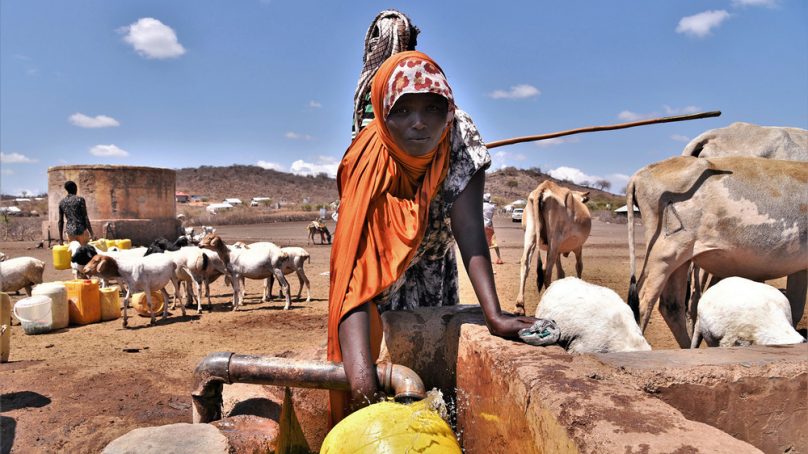 Although pastoralism is the bedrock of the economy in the arid and semi-arid lands (ASAL), the potential of commercialisation is blunted by a weak value-chain – from a lack of abattoirs and market access to only limited production of hides and skins, which effectively relegates pastoralism to a subsistence level.

“People think we don’t want to sell [our animals], but the problem is that the market linkages are so weak,” said Mustafa Kuntulo, a senior Isiolo government official.

Commercialisation, though, is not unproblematic. Noor is concerned that as change accelerates, middlemen and the wealthy will benefit the most. “There will be an incentive to grab land, fence it and convert it to ranches, preventing access [to pastoralists],” he observed.

Known as dedha (pronounced “detha”) it’s a land use management system that divides pasture into three zones: “wet” when water is plentiful, “dry” after the rains, and “drought” – to be used only in emergencies, to allow for the regeneration of pasture.

The dedha system has stringent laws governing pastoralist behaviour – from how trees are cut (you can’t take the whole branch) to who has first rights to water (it’s lineage-based, according to whose well it is, but thirsty travellers go to the front of the queue).

Nobody is allowed to graze in the nine declared drought reserves in Isiolo country until they are officially opened by a committee of elders and, even then, access is strictly controlled.

The result is that the Borana typically survive droughts in much better shape than other communities, where overgrazing and uncontrolled settlement has destroyed pasture.

It also makes the reserves a target for other pastoralists, especially from neighbouring Wajir and Garissa, bordering Somalia, with inevitable clashes as they try to force entry. Shifting rainfall patterns mean the reserves cannot be gazetted and protected by the authorities – which pushes responsibility down to the community.

“Unfortunately, you can’t choose your neighbours,” said Kuntulo, the government official. “We used to be very generous and allowed all to come, but other people only have themselves to blame for not managing their land and pasture properly.”

In Kiswahili, Kula Mawe literally means “eating stones” – a fair idea of the topography of the place. The watering point in this drought reserve is about 10 kilometres from pasture, and there’s a barging, bolshy procession of cattle, camels and goats coming to drink from morning to late afternoon.

In normal drought years, the 100-square-kilometre reserve is opened from October – this time the Borana elders greenlighted entry in mid-July.

Abdul Karim, the community chair in Kula Mawe, is worried that if the rains don’t come by this month, even the pasture here will be exhausted. “I can see the signs. The [livestock] fatalities will be very high,” he explained.

“This is the time we need the government to step in,” said Ibrahim Jarso, an Isiolo-based pastoralist development expert. “The aid response is going to be about saving lives.”

Government-supplied, nutrient-rich animal feed pellets have not so far been released in this part of Isiolo and a government promise to spend $18 million – much of it on trucking water into pasture lands – is yet to have an impact.

Jarso, a former pastoralist himself, is urging the implementation of an emergency cash transfer safety net programme for the most vulnerable to prevent the crash sale of livestock at rock-bottom prices.

And both Karim and Jarso argue that in the longer term, resilience means helping pastoralist widen their skills base, so they can develop complimentary livelihoods to help see them through the coming droughts. Muroya, the borehole manager in Kargi, is struggling to come to terms with the prospect of another season of hardship.

“Nothing is getting better. Every year, there are new problems, bigger than the last,” he told The New Humanitarian in the quiet late afternoon, when the animal traffic had subsided. “The future? For me, at least, I’m very pessimistic.”