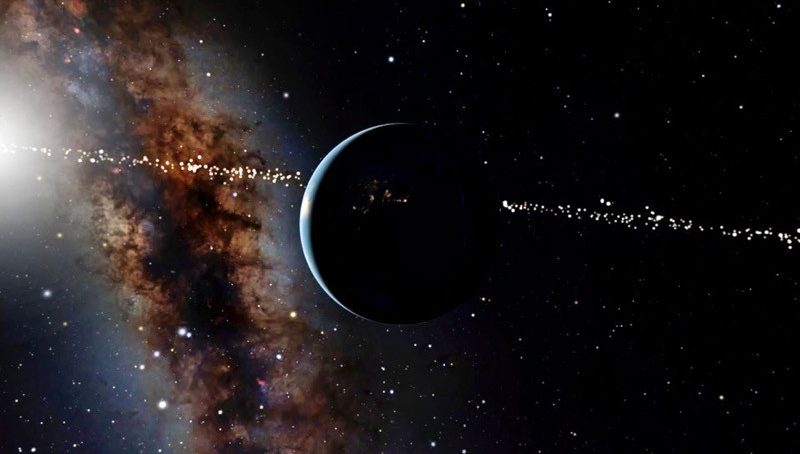 Scientists map out 2,000 stars with own planets from where aliens peep into Earth

Scientists searching for extra-terrestrial life should narrow their hunt to stars and planetary systems that have an occasional view of the Earth as it passes in front of the Sun.

Astronomers have pinpointed more than 2,000 stars from where, in the not-too-distant past or future, Earth can occasionally be detected transiting across the face of the Sun.

If there are aliens living on planets around those stars, with at least a similar level of technological advancement to our own species, then they would theoretically be able to spot us. They could even have observed as the amount of carbon dioxide in Earth’s atmosphere increased over the past several hundred years, since the industrial revolution.

The work, reported in this week’s Nature, offers a new way of thinking about the search for extra-terrestrial life, says Lisa Kaltenegger, an astronomer at Cornell University in Ithaca, New York, who led the analysis. “Who has the cosmic front seat to see us?” she asks. “For whom would we be the aliens?”

Those aliens would be the natural choice for Earthlings to look for, say the scientists – because they may have already had a chance to spot us, and thus might be primed to be ready for communications from Earth.

Although previous studies have considered this question, this is the first to incorporate the movement of stars over time, because stars can slide in or out of the narrow slice of the sky that happens to line up with both Earth and the Sun. With this information, the scientists were able to predict where Earth was visible from over the past 5,000 years or so of human civilisation – and also predict where it will be visible another 5,000 years into the future.

In doing so, the study expands astronomers’ thinking about which stars have “a better-than-average shot of discovering and characterising the Earth,” says Sofia Sheikh, an astrobiologist at the Berkeley SETI Research Center in California.

The discovery was made possible by the European Space Agency’s Gaia space observatory, which has compiled the best three-dimensional map of stars to date. Working with Jackie Faherty, an astronomer at the American Museum of Natural History in New York City, Kaltenegger analysed the Gaia map to see which stars have been, or will be, in a position where Earth briefly moves between them and our Sun.

Because most of the sky lies in other planes to that of our Solar System, there’s just a tiny sliver where this is possible, she says. Of the more than 330,000 stars in the Gaia catalogue that are within 100 parsecs of Earth, just 2,043 happen to have the perfect viewing geometry.

Of those, 1,715 are in the right locations to have spotted Earth in the past 5,000 years, and an additional 319 will have vantage points in the next 5,000 years. Seven of the 2,034 are already known to host planets – but many more are likely to have worlds orbiting them, some of which may be suitable for life.

The method assumed for spying Earth from elsewhere in the Galaxy is the same one that Earth-bound astronomers have used to discover thousands of exoplanets: detecting the light of a distant star dimming slightly and regularly, as an orbiting planet passes across its face.

With the results of this study, astronomers searching for extra-terrestrial life can now focus on stars and planetary systems that have a view of Earth and thus might already expect to hear from us. “It really helps in the hunting if you know where the prey is located,” says Seth Shostak, an astronomer at the SETI Institute in Mountain View, California.

Of those stars, the authors further identified 75 that are close enough — within 30 parsecs — for radio waves from Earth to already have washed over them since humans started to produce them. Those might be particularly good targets, Kaltenegger says, because aliens there could have both seen and heard us by now.

But other stars assume new prominence. For instance, astronomers know of seven Earth-sized planets orbiting the star TRAPPIST-1, 12 parsecs from Earth. TRAPPIST-1 will move into a position to see Earth as a transiting planet in the year 3663, say the study authors.

Astronomers and science-fiction writers have noted that civilisations could signal their existence by constructing artificial ‘megastructures’ that pass in front of their stars, briefly dimming their light in a characteristic way.

Perhaps, some say, humanity should plan ahead for when eyes from the TRAPPIST-1 system might be cast in our direction.

“Maybe we should think about installing a transiting megastructure for them to observe,” says René Heller, an astrophysicist at the Max Planck Institute for Solar System Research in Göttingen, Germany.