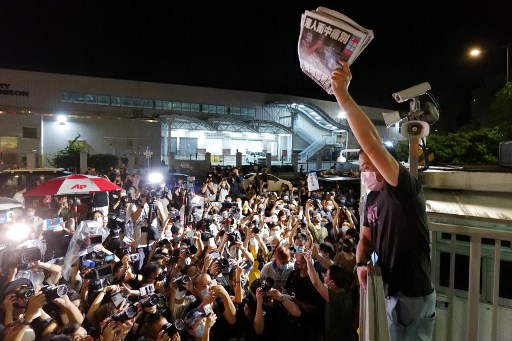 The Hong Kong edition of Apple Daily, published by the Hong Kong-based Next Digital media group, will print its last paper on June 24.

Next Digital said in a statement on its website that “Tomorrow (June 24) will be the last publication day” for its print edition. In addition, digital content will no longer be available on any platforms and subscriptions to the paper will not be renewed. Apple Daily was the last major pro-democracy newspaper in Hong Kong.

In a joint statement on June 24, a coalition of unions expressed “anger and pain for the loss of this much valued multi-media press group that had long been pursuing and defending journalism.”

The coalitions also instituted a black dress code among its media members for June 24 to demonstrate unity with Apple Daily and its media workers.

Assets of Next Digital were frozen last week in an attack by Hong Kong’s authorities that curtailed the publisher’s capacity to pay workers and suppliers. Mass resignations from media workers who feared for their physical and financial safety ensued.

The decision to shutter Apple Daily comes in the wake of a massive police raid on Next Digital’s offices and the arrest of five executives on June 17. The executives were arrested under Article 29 of China’s National Security Law, which prohibits “collusion with a foreign country or with external elements to endanger national security”.

Jimmy Lai was detained in December 2020 on charges of fraud under China’s repressive National Security Law. Lai and six other pro-democracy campaigners were found guilty of organising and taking part in an unauthorised assembly on August 18, 2019 as part of the wave of Hong Kong ‘umbrella revolution’.

The HKJA said, “We’ll be wearing black in protest of the government’s blow against freedom of press. We cannot take to the streets to express our dissatisfaction as we are bound by the group gathering ban, but it won’t keep us silent.”

The IFJ said: “This is a devastating day for democratic institutions in Hong Kong. This decision by Next Digital is a result of the Chinese authorities’ consistent assaults on press freedom. We call on Apple Daily to negotiate with affected workers through their trade union and to guarantee decent treatment, fair severance packages and respect for all workers involved. We call on the Chinese government to repeal the National Security Laws and let freedom of expression flourish in Hong Kong.”

Scientists map out 2,000 stars with own planets from where aliens peep into Earth