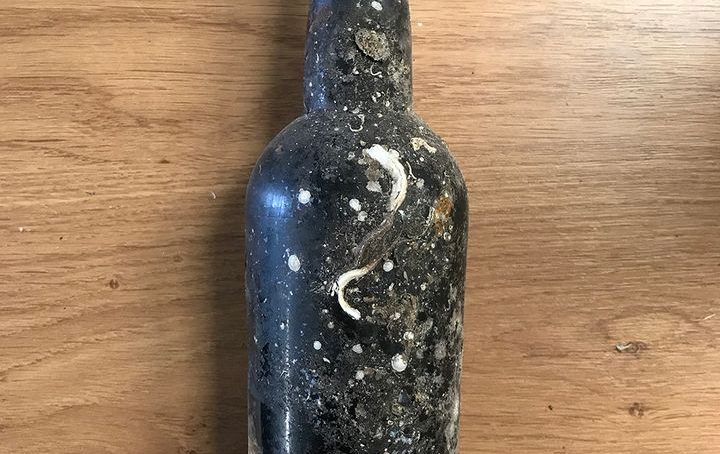 As the diver gently eased himself through a hatch into the sunken hold, he could see the shipwreck’s treasure lying in wait for him. It had been down there for more than 100 years. But now some of it was about to be freed from its resting place.

The explorer in question, Steve Hickman, a dive technician and amateur diver, carried a small, netted bag with him. The treasure he was after was beer. Preserved in the hold of this vessel were row upon row of glass beer bottles, partly buried in silt.

As soon as he moved the first bottle from where it lay, sediment billowed in huge clouds. With visibility reduced to nil, Hickman was effectively blinded. But he knew this wreck well and had visited it many times before. He carried on, feeling for more bottles in the gloom. Once he had gathered and bagged a few, he made his escape and his team carefully carried the bottles to the surface.

The wreck was the Wallachia, a cargo ship that sank in 1895 off the Scottish coast following a collision with another vessel in heavy fog. The Wallachia had just departed from Glasgow and was packed with various kinds of cargo, including large containers of a chemical called tin chloride. But the ship also had thousands of bottles of alcoholic beverages aboard.

Long-forgotten yeast strains are being sought out from shipwrecks, abandoned breweries and other locations in the hope they could be put to good use if resurrected. Many of them have been preserved in the cold water where the ship lay on the silty seabed for more than a century.

Since he began diving to the Wallachia in the 1980s, Hickman has retrieved dozens of bottles containing whisky, gin and beer. But his recent visit, a team effort with several companion divers, led to something unusual. The bottles they retrieved were handed to scientists at a research firm called Brewlab, who, along with colleagues from the University of Sunderland, were able to extract live yeast from the liquid inside three of the bottles. They then used that yeast in an attempt to recreate the original beer.

In 2018, a similar project in Tasmania used yeast from 220-year-old beer bottles found on a shipwreck to approximate a beverage from the 1700s. But the study of the Wallachia yeast revealed a surprise. Those beers contained an unusual type of yeast and the team behind the work is now evaluating whether this long-lost strain could have applications in modern brewing or could even improve beers today.

It is just one example of a growing field of research among brewers and other fermenters of liquids who are seeking forgotten strains of yeast in the hope they can be put to good use. That means hunting for them in old bottles found on shipwrecks, scouring ancient pots, and collecting samples from ruined distilleries where fabled strains may yet linger.

This kind of search is called bioprospecting and resurrecting historic yeasts could have many applications, from cleaning up pollution to assisting in the production of aromas for the perfume industry.

When Steve Hickman first began gathering bottles of beer from the Wallachia back in the 1980s, he claims it was still – just about – drinkable. He and his friends brought the bottles home and poured them out into glasses. The beverage, nearly 100 years old at the time, settled slowly and developed a thick, creamy head – almost like Guinness, he recalls. But that’s where the magic ended.

“It had the most atrocious smell,” says Hickman. “A sort of salty, putrefied smell. I think that would be the best description.” It didn’t taste any better, he adds.

The bottles had other surprises – including a habit of exploding, says Hickman. As they adjusted to the lower pressure above sea level, gases inside the vessels expanded, occasionally shattering the glass. Once, Hickman left a bottle on the kitchen table in his parents’ house. It burst while they were in another room, spraying stinking, decaying beer everywhere. It took a long time to clean up, he remembers.

Nowadays, the beer has deteriorated even further and he wouldn’t attempt sipping it. (As a general point, drinking old liquids might not be safe because you can’t be sure whether they contain harmful bacteria or chemicals.) However, some of Hickman’s diving companions were able to taste fresh beer created by Brewlab using strains of yeast isolated from the old Wallachia bottles.

Andy Pilley, a chartered surveyor and fellow amateur diver who was also on the expedition to collect beer from the wreck, was among those who tried the result: a 7.5 per cent stout.

“I certainly got coffee and chocolate from it,” he says. It was Pilley who decided to send the Wallachia beer to Brewlab after he heard about the company by chance at a restaurant.

Scientists at Brewlab, a spin-out from the University of Sunderland, have studied yeast strains and brewing techniques for years. The firm’s founder, Keith Thomas, says that once beer from the Wallachia was in his lab, it was treated with the utmost caution.

“We opened it in containment level two laboratory conditions,” he says. This involved unsealing the bottles in a special cabinet filled with sterile air in order to protect the scientists from any possible pathogens in the beer. This measure also ensured that the samples did not become contaminated with any modern-day yeast strains.

Genetic testing revealed that the Wallachia stout contained two different types of yeast – Brettanomyces and Debaryomyces. In a paper about the work, Thomas and his colleagues explain that it’s unusual to find Debaryomyces in an historic beer, though this type of yeast has turned up in a few Belgian beers made using spontaneous fermentation, which relies on leaving pre-fermented liquid open to the environment so that yeast strains may settle on it.

Some of the most common yeast strains used in brewing are from the species Saccharomyces cerevisiae. Generally, fermentation occurs when yeasts consume the sugars in malted grains like barley. The yeast turns these sugars into alcohols, carbon dioxide and various by-products.

Some of those by-products impart flavour and so each individual yeast strain, metabolising in its own way, will yield a different flavour profile in the fermented product. It all comes down to the genome of the strain in question, or strains, plural, in the case of the Wallachia beer.

Most modern brewers don’t vary the yeast they use a great deal, though they do commonly experiment with other ingredients such as the grain they ferment, or the hops they add later in the process to impart flavour.