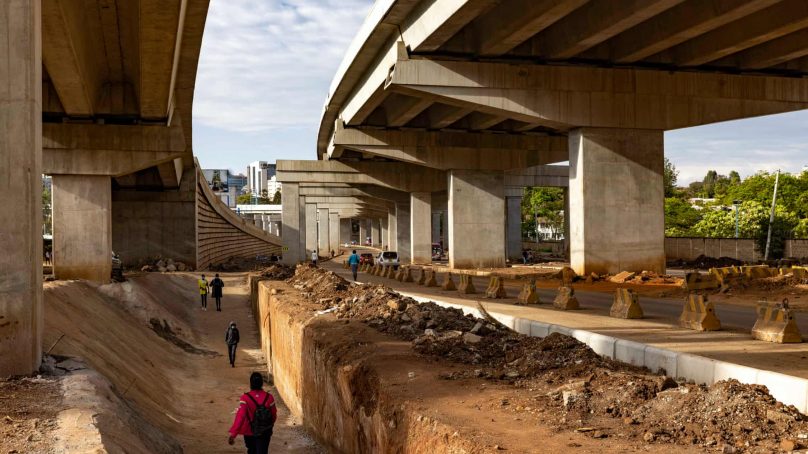 About 40,000 people have been made homeless by demolition works for a major Chinese-backed toll road in Kenya’s capital, Nairobi.

Amnesty International Kenya says it believes the roadworks have created a humanitarian crisis, as schools, businesses and 13,000 homes spread across nearly 40 hectares (100 acres) of the Mukuru Kwa Njenga slum have been demolished since October, clearing land for a link to the Nairobi expressway.

People lost clothing and other personal belongings, and dozens of families are now sleeping in makeshift tents in the rubble amid open sewage, during the seasonal rains. Left with no way of making money, some said they had not eaten in days.

At least one person has died in a partially demolished building, with unconfirmed reports of children being injured in the chaos, says Amnesty’s Diana Gichengo.

The first round of demolitions in Mukuru-kwa-Njenga, which were publicly announced on October 8, started only three days later. Heavy road-building machinery, some bearing government logos and flanked by Kenyan police, flattened homes and businesses along a 30-metre-wide strip of Catherine Ndereba Road.

Named after a Kenyan world champion marathon runner, the road connects Mukuru to the industrial area to the north, the airport to the east and the route of the new expressway to the west. In November, buildings on a large area of adjacent private land were also razed, with people living there complaining that they had no warning. This land, owned by a private firm, Orbit Chemical Industries, had been at the centre of several complex court disputes.

“I got a call [from a neighbour] that my house was going to be demolished,” says Mary Ndhamba, who works in Briton school, next to the cleared area, which is now a landscape of rubble, sewage and scattered personal effects.

Ndhamba got a lift on the back of a motorbike and raced home. “There were police beating people and launching teargas. People were scattering and as we approached, I could see the bulldozers were less than 100 metres from my house.”

She was only able to save her bedframe. Police “started caning people”, when the diggers were just metres away, says Ndhamba, who claims she had to kneel in front of them to beg “not to be hit”.

People vacated their properties peacefully in October to make way for the development, but by November there were protests, says Anami Daudi Toure, coordinator at Mukuru Community Justice Centre. “In November, resistance to the demolition mounted for a couple of days until hundreds of armed police moved in with riot vehicles mounted with water cannons,” Toure says.

“I ran to safety,” he adds. “I was lucky. When I came back to look for my belongings I saved my mattress, but everything else had been destroyed or picked up by street boys to sell.”

The 17-mile (27km) expressway will link the international airport to the central business district and plusher residential areas. It is designed to ease the congestion on the city’s A8 main artery, so notorious that it is said to cost the country millions in lost business. As Kenya’s election in August 2022 nears, the race to complete the road is seen as President Uhuru Kenyatta’s wish to complete his legacy project before his term ends.

The road is financed by the Chinese state-owned China Road and Bridge Corporation, which will use the tolls to recoup their $550 million investment.

But critics point to the fact that the vast majority of people will not be able to afford the road in a city where walking is the dominant mode of transport, accounting for 45.6 per cent of commuters, compared with 40.7 per cent by bus, 13.5 per cent by private vehicle, and 0.2 per cent by rail. People walk because they cannot afford a bus fare.

Many people will struggle to afford the tolls, expected to cost between $1 and $15 depending on the vehicle and the length of journey. Critics have branded the elevated route a road for the rich, flying over the old, potholed highway in an illustration of the gulf between Kenya’s rich and poor. Even its bus lane is expected to carry only larger coaches, not the matatus favoured by the poor.

More than half of Nairobi’s population (more than two million) live on just five per cent of the city’s residential areas in slums lined by rutted, ill-kept roads, while the green suburbs of the large, neat houses in the wealthy suburbs are far better served.

Mary Bosibori’s husband, Bernad Mogaka, was killed by falling debris as he tried to salvage belongings from his partially demolished house. “I am hurting,” she says. The grieving Bosibori and her nine-year-old daughter, Virginia, are now staying with 18 others displaced by the bulldozers in a four-square-metre flat. There is not enough room on the floor for people to lie down, so they must sleep sitting in a row on the sofa.

“Bernad was the breadwinner, and left behind a young family,” says Geoffrey Onchieku, Bernad’s friend, and founder of the Briton school. “The government should stop dehumanising people – they haven’t told us where the expressway will start and where it will end. They just demolish all over without informing the inhabitants.”

Like many in Mukuru-kwa-Njenga, which has been settled since the 1960s, Bosibori managed to scrape by in the informal economy, selling avocados by the road. The diggers took out hundreds of roadside businesses as well as homes, leaving many people unable to raise the money to rent alternative accommodation or even the bus fare to reach relatives.

Martin Muiruri made about $700 a month with his grocery stall. He points to the rubble where it used to be. “They flattened everything mercilessly. I had to run for my life.

“My kids are supposed to be going to school. How can we pay for it now?” asks Muiruri, who is staying with a friend. “I have nothing now, nothing. We don’t know the way forward.”