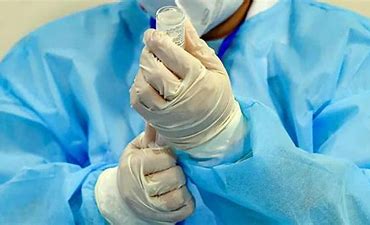 Data accrued by the National Institute for Communicable Diseases show that hospitals in Tswane, South Africa, 80 per cent of Omicron patient admissions are people below 50 years of age, with 28 per cent of admissions being between the ages of 30 and 39.

Nineteen per cent of admissions were children younger than nine years of age. There are only four patients in high care and one in the ICU.

The numbers of patients in high care on double oxygen, High Flow Nasal Oxygen or non-invasive ventilation were noticeably higher in previous waves. This is anecdotal but confirmed by numerous clinicians who have previously worked in the Covid wards in the hospital complex. According to the data:

• In many cases patients tested positive for the coronavirus because they were admitted for other purposes, for instance having a baby or for surgery.

• On December 2, 70 per cent of patients with Covid-19 were not dependent on oxygen and did not present with any respiratory symptoms. These were all patients who incidentally tested positive for the coronavirus when they were admitted to hospital for other reasons.

• Thirteen patients were dependent on supplemental oxygen, of which nine (21 per cent) have a diagnosis of Covid-19 pneumonia based on a combination of symptoms, clinical signs and other markers.

• The remaining four patients are on oxygen for other medical reasons.

Dr Fareed Abdullah, the director of the Office of AIDS and TB Research at the SAMRC and a part-time HIV Clinician at the Steve Biko Academic Hospital, says of the picture that emerges, “This is a picture that has not been seen in previous waves. In the beginning of all three previous waves and throughout the course of these waves, there has always only been a sprinkling of patients on room air in the Covid ward and these patients have usually been in the recovery phase. The Covid ward was recognisable by the majority of patients being on some form of oxygen supplementation with the incessant sound of high flow nasal oxygen machines, or beeping ventilator alarms.”

Dr explained that another change from the previous three waves is that younger people are being admitted.

“This is in keeping with the age profile of admissions in all public and private hospitals in Tshwane and throughout the Gauteng Province in the last two weeks as reported by the NICD and the Gauteng Provincial Government,” he said.

A key measurement of the severity of an outbreak is hospital death rate. Abdullah said there were 10 deaths among those admitted in the hospitals where the research was being done, making up 6.6 per cent of the 166 admissions. Four deaths were in adults aged 26-36 and five deaths were in adults over 60. One death was in a child in whom the cause of deaths was unrelated to Covid.

“There were no Covid-related deaths among 34 admissions in the paediatric Covid wards over the last two weeks.

“The trend over the next two weeks will be clarified as the number of deaths is currently low, and sufficient time will have elapsed for the development of greater severity of disease and the number of deaths might be expected to increase. For now, the death rates over the last two weeks, as well as over the past 18 months at the SBAH/TDH complex (around 17 per cent), are lower than the overall in-hospital death rate of 23 per cent for the country over all previous waves, as reported by the NICD,” he said.

He cautioned though that there was a lag between a rise in cases and a rise in deaths.

“The trend will become clearer over the next few weeks,” he said. “There were only two patients in the Covid ICU in the last 14 days, neither of whom had a primary diagnosis of Covid pneumonia. Sixty-three patients were admitted to high care, but our anecdotal information is that the majority of high care admissions were for a diagnosis other than Covid,” he added.

He added that three of the four patients in the high care ward had a primary diagnosis of severe Covid pneumonia, so it could be that the more recent profile is changing to more severe Covid disease.

The relatively low number of Covid-19 pneumonia hospitalisations in the general, high care and ICU wards constitutes a very different picture compared to the beginning of previous waves. A detailed analysis comparing the current picture with previous waves is still being conducted. This may very well be related to the early upswing of the fourth wave, with the more classical pattern becoming evident over the next two weeks.

What is clear, though, is that the age profile is different from previous waves. It may be that this is a vaccination effect as 57 per cent of people over the age of 50 have been vaccinated in the province, compared to 34 per cent in the 18-49-year group.

Last week Dr Mary Kawonga from the Gauteng Premier’s Advisory Committee said they were seeing a rapid and sustained increase in cases, and a rising test positivity rate, but at this stage hospitalisations and deaths were increasing at a much lower rate than cases. She too confirmed that there had been a shift from older to young people being admitted.