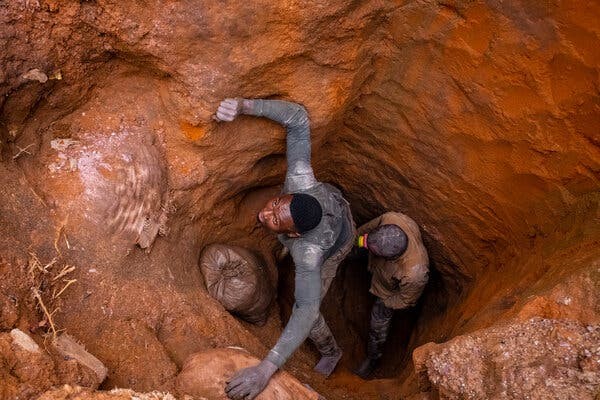 A man in a pinstripe suit with a red pocket square walked around the edge of a giant pit one April afternoon where hundreds of workers often toil in flip-flops, burrowing deep into the ground with shovels and pickaxes.

His polished leather shoes crunched on dust the miners had spilled from nylon bags stuffed with cobalt-laden rocks.

The man, Albert Yuma Mulimbi, is a long-time power broker in the Democratic Republic of Congo and chairman of a government agency that works with international mining companies to tap the nation’s copper and cobalt reserves, used in the fight against global warming.

Mr Yuma’s professed goal is to turn Congo into a reliable supplier of cobalt, a critical metal in electric vehicles, and shed its anything-goes reputation for tolerating an underworld where children are put to work and unskilled and ill-equipped diggers of all ages get injured or killed.

“We have to reorganise the country and take control of the mining sector,” said Yuma, who had pulled up to the Kasulo site in a fleet of SUVs carrying a high-level delegation to observe the challenges there.

But to many in Congo and the United States, Yuma himself is a problem. As chairman of Gécamines, Congo’s state-owned mining enterprise, he has been accused of helping to divert billions of dollars in revenues, according to confidential State Department legal filings reviewed by The New York Times and interviews with a dozen current and former officials in both countries.

Top State Department officials have tried to force him out of the mining agency and pushed for him to be put on a sanctions list, arguing he has for years abused his position to enrich friends, family members and political allies.

Yuma denies any wrongdoing and is waging an elaborate lobbying and legal campaign to clear his name in Washington and Congo’s capital of Kinshasa, all while pushing ahead with his plans to overhaul cobalt mining.

Effectively operating his own foreign policy apparatus, Yuma has hired a roster of well-connected lobbyists, wired an undisclosed $1.5 million to a former White House official, offered the United States purported intelligence about Russia and critical minerals and made a visit to Trump Tower in New York, according to interviews and confidential documents.

Yuma met with Donald Trump Jr. there in 2018, a session the mining executive described as a quick meet-and-greet. Despite such high-level access during the Trump administration, he was barred just two months later from entering the United States.

His grip on the mining industry has complicated Congo’s effort to attract new Western investors and secure its place in the clean energy revolution, which it is already helping to fuel with its vast wealth of minerals and metals like cobalt.

Batteries containing cobalt reduce overheating in electric cars and extend their range, but the metal has become known as “the blood diamond of batteries” because of its high price and the perilous conditions in Congo, the largest producer of cobalt in the world.

As a result, carmakers concerned about consumer blowback are rapidly moving to find alternatives to the element in electric vehicles, and they are increasingly looking to other nations with smaller reserves as possible suppliers.

There is a chance that Congo’s role in the emerging economy could be diminished if it fails to confront human-rights issues in its mines. And even if Yuma works to resolve those problems, as he has pledged to do, it still may not be enough for new American investors who want to be assured the country has taken steps to curb a history of mining-industry corruption.

Congo’s president, Felix Tshisekedi, has tried to side-line Yuma by stacking Gécamines with his own appointees, but he has been unwilling to cross him further. During an interview at his hillside palace in Kinshasa, Mr Tshisekedi said he had his own strategy for fixing the country’s dangerous mining conditions.

The standoff between Yuma and the president echoes power struggles that have torn apart African countries rich with natural resources in the past. How this one plays out has implications that reach far beyond the continent, as the global battle against climate change calls for a stepped-up transition from gasoline-burning vehicles to battery-powered ones.

For Congo, the question boils down to this: Will Yuma help the country ride the global green wave into an era of new prosperity, or will he help condemn it to more strife and turmoil?

High-tech, industrial mines run by global corporations like China Molybdenum employ thousands of people in Congo’s cobalt sector and while they have their own problems, they are largely not responsible for the country’s tarnished reputation abroad.

Players in the clean energy revolution are increasingly caught in a cycle of exploitation and greed over resources. At the centre of it is the quest for a prized metal: cobalt, a key ingredient in electric cars.

It’s a different story for the artisanal sector, where Yuma plans to focus the bulk of his stated reforms. Consisting of ordinary adults with no formal training, and sometimes even children, artisanal mining is mostly unregulated and often involves trespassers scavenging on land owned by the industrial mines. Along the main highway bisecting many of the mines, steady streams of diggers on motorbikes loaded down with bags of looted cobalt — each worth about $175 – dodge checkpoints by popping out of sunflower thickets.

Unable to find other jobs, thousands of parents send their children in search of cobalt. On a recent morning, a group of young boys were hunched over a road running through two industrial mines, collecting rocks that had dropped off large trucks.

The work for other children is more dangerous – in makeshift mines where some have died after climbing dozens of feet into the earth through narrow tunnels that are prone to collapse.

Kasulo, where Mr. Yuma is showcasing his plans, illustrates the gold-rush-like fervour that can trigger the dangerous mining practices. The mine, authorized by Gécamines, is nothing more than a series of crude gashes the size of city blocks that have been carved into the earth.

The Impossible Burger: Inside the strange science of the synthetic meat that ‘bleeds’