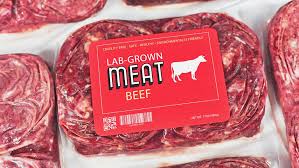 The Impossible Burger: Inside the strange science of the synthetic meat that ‘bleeds’

The cook, complete with hair net, lays the red patty down on the grill and gives it a press with a spatula. And there, that unmistakable sizzle and smell. She flips the patty and gives it another press, lets it sit, presses it, and pulls it off the grill and onto a bun.

This is no diner, and this is no ordinary cook. She’s wearing not an apron, but a lab coat and safety goggles, standing in a lab-kitchen hybrid in a Silicon Valley office park. Here a company called Impossible Foods has over the last six years done something not quite impossible, but definitely unlikely: Engineering a plant-based burger that smells, tastes, looks, and even feels like ground beef.

There are other veggie burgers on the market, of course, but Impossible Foods wants to sell consumers a real meat analogue – one that requires a very different kind of engineering than your Boca or black bean burgers.

Biting into an Impossible Burger is to bite into a future in which humanity has to somehow feed an exploding population and not further imperil the planet with ever more livestock. Because livestock, and cows in particular, go through unfathomable amounts of food and water (up to 11,000 gallons a year per cow) and take up vast stretches of land. And their gastrointestinal methane emissions aren’t doing the fight against global warming any favours either (cattle gas makes up 10 per cent of greenhouse gas emissions worldwide).

This is the inside story of the engineering of the Impossible Burger, the fake meat on a mission to change the world with one part soy plant, one part genetically engineered yeast – and one part activism. As it happens, though, you can’t raise hell in the food supply without first raising a few eyebrows.

What makes a burger a burger? The smell, for one, and taste and texture, all working in concert to create something animal. It’s loaded with all manner of proteins that interact with each other in unique ways, creating a puzzle of sorts. But Impossible Foods thinks the essence of a meat lies in a compound called heme, which gives ground beef its colour and vaguely metallic taste – thanks to iron in the heme molecule. In blood, heme lives in a protein called hemoglobin; in muscle, it’s in myoglobin.

Interestingly, you’ll find globins (a class of proteins) not just across the animal kingdom, but in plants as well. Soy roots, for example, carry a version called leghemoglobin, which also carries heme. Leghemoglobin in soy and myoglobin in meat share a similar 3-D structure consisting of what’s known as an alpha helical globin fold, which wraps around the heme.

So, what if you could extract the heme from a plant to obtain that secret ingredient in ground beef? Well, the main problem, Impossible Foods found, is that you’d need a heck of a lot of soy: One acre of soybeans would yield just a kilogramme of soy leghemoglobin.

Impossible Foods founder and CEO Pat Brown figured out how to hack together a better way. Technicians take genes that code for the soy leghemoglobin protein and insert them into a species of yeast called Pichia pastoris. They then feed the modified yeast sugar and minerals, prompting it to grow and replicate and manufacture heme with a fraction of the footprint of field-grown soy. With this process, Impossible Foods claims it produces a fake burger that uses a 20th of the land required for feeding and raising livestock and uses a quarter of the water, while producing an eighth of the greenhouse gases (based on a metric called a life cycle assessment).

Now, engineering a “beef” burger from scratch is of course about more than just heme, which Impossible Foods bills as its essential ingredient. Ground beef features a galaxy of different compounds that interact with each other, transforming as the meat cooks. To piece together a plant-based burger that’s indistinguishable from the real thing, you need to identify and recreate as many of those flavours as possible.

To do this, Impossible Foods is using what’s known as a gas chromatography mass spectrometry system. This heats a sample of beef, releasing aromas that bind to a piece of fibre. The machine then isolates and identifies the individual compounds responsible for those aromas.

“So, we will now have kind of a fingerprint of every single aroma that is in beef,” says Celeste Holz-Schietinger, principal scientist at Impossible Foods. “Then we can say, How close is the Impossible Burger? Where can we make improvements and iterate to identify how to make each of those particular flavour compounds?”

This sort of deconstruction is common in food science, a way to understand exactly how different compounds produce different flavours and aromas. “In theory, if you knew everything that was there in the right proportions, you could recreate from the chemicals themselves that specific flavour or fragrance,” says Staci Simonich, a chemist at Oregon State University.

Then there’s the problem of texture. Nothing feels quite like ground beef. So Impossible Foods isolates individual proteins in the meat. “Then as we identify what those particular protein properties are, we go and look at plants for plant proteins that have those same properties,” says Holz-Schietinger. Plant proteins tend to taste more bitter, so Impossible Foods has to develop proteins with a cleaner taste.

What they’ve landed on in the current iteration is a surprising mix. Ingredients include wheat protein, to give the burger that firmness and chew. And potato protein, which allows the burger to hold water and transition from a softer state to a more solid-state during cooking. For fat, Impossible Foods uses coconut with the flavour sucked out. And then of course you need the leghemoglobin for heme, which drives home the flavour of “meat.”

For something that so accurately mimics the taste and look and feel and smell of meat (and trust us, it does), the Impossible Burger is actually not all that complex.

“Earlier iterations were much more complex because we didn’t fully understand it,” says Holz-Schietinger (experiments with cucumber and the famously smelly durian fruit didn’t … pan out, nor did trying to replicate the different connective tissues of a cow). “Now we understand which each component drives each sensory experience.”

At the moment, the Impossible Burger is only available in select restaurants, though Impossible Foods just opened a plant with the idea of increasing production from 300,000 pounds a month to a million. But as they focus on expansion, some critics are raising questions about the burger of tomorrow.