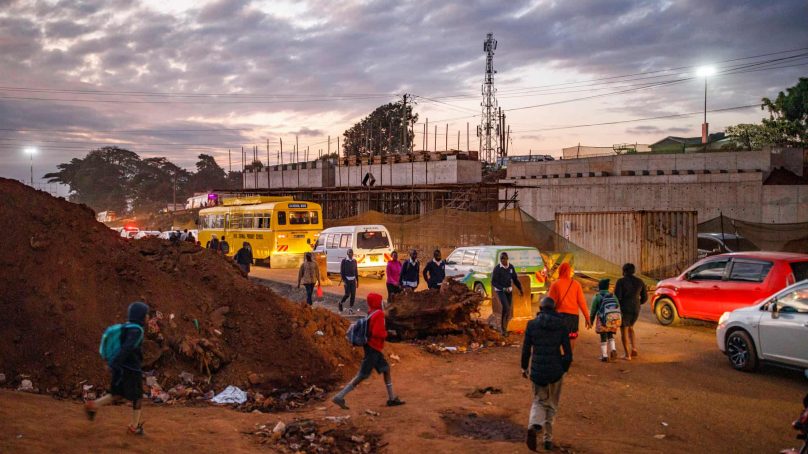 Orbit Chemical Industries bought the site where it located in Nairobi’s Industrial Area in 1987. The firm wanted to build a factory but was unable to, as the land was inhabited. After years of legal wrangling, Orbit Chemical says it decided, in 2008, to try to sell the land off in parts.

Orbit Chemical says some plots were donated and given to schools, churches and public facilities but, not wanting to completely lose their investment, the company also tried to sell plots to the existing community. However, rogue landlords were already charging tenants rent.

“We came up against massive resistance,” says Sachen Chandaria, CEO of Orbit Chemical. Many of the plots are still in Orbit’s possession but others, outside the company, have their eyes on what could be lucrative land.

Questions are being asked about how heavy government equipment and state police were used to clear private and donated land without notice. The clearance is intended to create room for the construction of a new road linking the Jomo Kenyatta International Airport to the to the posh residential areas to the west.

“Someone, somewhere – and we are still investigating to know who exactly – used that opportunity to actually evict people … who had no indication at all that their settlement would be demolished,” says Dr Nicholas Orago, executive director of Hakijamii, a social rights NGO.

“We are manufacturers, I wouldn’t know who to call to do this. It’s a complete nightmare. I sit here every day wondering how to deal with this.”

Orbit Chemical was hoping their division of land would provide a model for the development of proper housing and infrastructure.

Jennifer Atiano and her baby are living in one of hundreds of makeshift wood and sacking shelters that have sprung up. Both are HIV positive, but their medicine, documents and ID were lost. “Suicide even came to my mind,” says Atiano, who was sacked for being late for work the day after the demolition. Her boss refused to listen to “any excuses”.

The situation is deteriorating. Minoo Kyee, from Mukuru Community Justice Centre, says: “With people sleeping outside, there is a lot of sexual and gender-based violence that is not being documented.” Kyee’s community centre was demolished, leaving people unable to report crimes or find social support. “Husbands are beating their wives out of anger and frustration over what has happened,” she says.

Abdia Noor, 52, a businessman now sleeping rough with his family, says: “Children are not going to school and toddlers are getting respiratory problems from sleeping in the cold.”

Augustine Nthumbi, Nairobi’s police commander, says he oversaw the demolition and that “no one was injured”. He says the work was done “very quietly and by the time that they started … all those shanties … were already vacated, anyone who sleeps outside wants to sleep outside. There is nothing inhumane that happened there, unless people want to fabricate issues.”

Forced evictions happen regularly in slums but rarely on this scale. Gichengo says: “This is the biggest eviction during the pandemic. President Kenyatta had given a moratorium on all evictions and it’s coming at a time when the economy is under duress.” She says although there were meetings about the proposed demolitions, the message didn’t get to the majority of people.

Africa Kiiza, trade policy analyst at the University of Hamburg in Germany, says infrastructure development in east Africa is happening “at all costs, whether that’s environmental or humanitarian”.

“This is development for who? You are affecting the people who you are meant to be helping.”

Nairobi’s congested roads mean that business people and diplomats sit for three or four hours in traffic to get from the airport to meetings. The new expressway, which has been criticised by environmentalists, is part of a shift towards “emphasising and redefining the colonial trend of infrastructure mapping” says Kiiza, where roads, airports and railways are built in “areas of strategic importance with little consideration of the needs of the locals”.
The road will make up part of China’s belt and road initiative, an ambitious agenda to link land and sea trade routes across Asia and Africa.

According to Kiiza, African governments often look to China for funding development as the country is less rigid than US or European funders when it comes to human rights or corruption. “China does not care, as long as it’s getting the construction tender,” he says.

Kenya is heavily in debt to China. Kiiza describes the relationship between the two countries as “parasitic”. The power imbalance is a “reinforcement of imperialism, where, if a country fails to pay, it is forced to give away access and control to natural and strategic resources like ports and airports”, he says.

Nairobi’s governor, Anne Kananu Mwenda, announced that people living in Mukuru Kwa Njenga would be helped to rebuild outside of the expressway’s path and Major General Mohammed Badi, head of Nairobi Metropolitan Services, tasked with carrying out the demolition, told residents that the president would use his own money to help them rebuild.

“People are desperate, so when you bring the building materials people will fight to get the sheets and it will create violence in the community,” says Kyee.

The Kenya Red Cross has handed out tarpaulins for shelters, and church groups have been bringing food. Outdoors in the merciless rain, displaced people burn tyres to keep warm. Pastor Regina Ndinda, 53, sits on a red velvet chair among the rubble of her church and home of 25 years, reading her Bible. “I’m looking for something to comfort me, because my heart is broken,” she says.