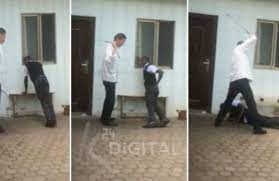 An irate Chinese boss is screaming at his African workers as they take a lunch break, urging them to work harder or else the company would not make any money. While intended to be funny, the new Egyptian TV commercial – since pulled down for fear of offending Beijing – reveals widely-held African perceptions about the way Chinese companies on the continent treat their local staff.

Last month, a Rwandan court made a significant statement against the mistreatment of its citizens by sentencing mine manager Sun Shujun to 20 years in jail after a video of him whipping a tied-up worker went viral.

The case sparked outrage across the continent and even elicited a rare response from the Chinese Embassy in Kigali, which warned its citizens in Rwanda “to abide by local laws and regulations.”

The Rwandan incident is not the only example of recent Chinese rights abuses in Africa. A report last year by the UK-based Business and Human Rights Resource Center found 181 human rights allegations connected to Chinese investments in Africa between 2013 and 2020, with the highest number of incidents in Uganda, Kenya, Zimbabwe, and the Democratic Republic of Congo.

Last year a Kenyan waiter was awarded more than $25,000 in damages after he was whipped by his Chinese restaurant boss. The abuse was captured on video and showed the boss laughing while the waiter begged for forgiveness. A Kenyan court found the man had also suffered “continuous sexual harassment, corporal punishment, verbal abuse and confinement” while working at the restaurant.

There have also been reports of Chinese employers mistreating locals who worked on a Chinese-built railway in Kenya documented in 2018 by The Standard newspaper. Separately, a Chinese trader was deported in a highly publicised case after using racial slurs against Kenyans, including calling the president “a monkey” in 2018.

Due to its massive mineral wealth and large number of Chinese-managed mines, the Democratic Republic of Congo is another country where rights abuses are regularly recorded. On Wednesday, a Congolese investigative journalist released a report detailing how small-scale Chinese cobalt miners are using child labour.

Josue Kashal, a lawyer from Congolese NGO Le Centre d’Aide Juridico-Judiciaire, represented a local mine worker earlier this year who was injured in an accident at China Molybdenum’s Kisanfu cobalt and copper mine. A landmark decision by the court ordered the mine to pay the worker’s hospital costs and lost wages.

“There are lots of violations of workers’ rights,” he told VOA, adding that local miners in DRC are paid small salaries and have shoddy protective equipment.

In Zimbabwe too, abuses by Chinese employers of local workers have been recorded, with one of the most egregious examples in 2020 when a Chinese employer, Zhang Xuen, shot and seriously injured two Zimbabwean workers after a wage dispute at a mine in the town of Gweru. Zhang was charged with attempted murder and the case is still pending.

The Chinese national was taken to court and the embassy in Harare said it was “highly concerned” about the shooting but stressed it was “an isolated incident.” The embassy statement continued, “any possible illegal acts and persons who violate the law should not be shielded.”

Shamiso Mtisi, deputy director of the Zimbabwe Environmental Law Association (ZELA), disagrees with the embassy’s statement saying the incident was isolated. He said there is a pattern of abuse by Chinese employers in Zimbabwe.

“ZELA is aware of several cases of abuse of Zimbabwean workers by Chinese employers, and this happens on a regular basis at some of the Chinese mining companies,” he told VOA. “I think the problem is they see themselves as superior.”

Mtisi said workers at Chinese-owned mines in the country are paid low wages and given poor personal protective equipment. However, he noted, it falls on the Zimbabwean government to uphold workplace standards and protect its nationals, and he says they are failing to do so because China is the country’s largest foreign investor.

“The challenge is the Chinese appear to be getting some protection either from government or some politicians, so they normally get away with it,” he said.

But the public raft of abuses by Chinese employers on the continent have prompted the Chinese government to respond. The Chinese Embassy in Namibia published a guide this week for Chinese expats in the southern African country on its WeChat page informing them of best practices while working abroad and how to avoid transgressions.

It included advice on how to handle wage disputes with local workers, not brandishing firearms to threaten staff, not “intimidating or coercing” striking workers, and always handling such matters by involving local authorities instead of taking things into one’s own hands.

And it seems some Chinese citizens living on the continent are also worried about the behaviour of their compatriots. An anonymous man blogging under the name “Africa Bob,” who says he’s a business owner in Rwanda, took to Weixin to express his disgust over the recent whipping case and Sun Shujun’s actions.

“In this matter, Mr Sun from China is indeed doing something wrong. We are now in another country, and the first thing we should do is abide by local laws and regulations,” he wrote. But he continued by writing, “the sentence is really too high.”

“Africa Bob” then wrote a list of good behaviour tips for Chinese nationals living on the continent, urging his compatriots not to be racist.

“There are so many outstanding people in Africa … There are many excellent people, how can you arbitrarily say that Africans are not diligent?” he said. “I hope that one day we (Chinese) can be respected in Africa … and this requires the efforts of every Chinese in Africa.