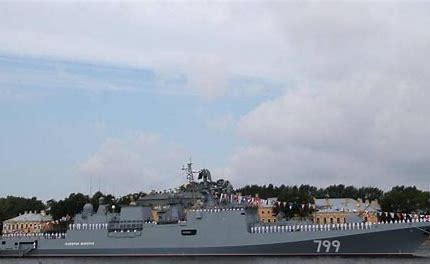 Another Russian naval ship in the Black Sea was hit and left burning by the Ukrainian military, according to unconfirmed reports.

The Admiral Makarov, a 409-foot Russian frigate, was sailing close to Snake Island in the Black Sea, off the coast of the Ukrainian port city of Odessa, when it was reportedly hit by an R-360 Neptune anti-ship missile fired from the Ukrainian mainland.

Per the Kyiv Post, Ukrainian general staff and Ukrainian Member of Parliament Oleksiy Goncharenko said that the ship had been hit. Russia denied that, however. It is unclear whether or not the ship was engaged in active combat with Ukrainian forces before it was struck.

Several Twitter accounts that monitor open-source flight data gathered from satellites and transponders reported that known Russian rescue vessels and aircraft had rushed to the area, shortly after reports emerged that the Makarov had been struck with a missile.

Those accounts also reported that an unarmed US military RQ-4 Global Hawk surveillance drone had been circling the area, indicating that an incident may have occurred. Photos of a ship burning, claimed to be the Makarov by users, were circulating on social media, though these have been unconfirmed.

Pentagon spokesman John Kirby said today that the United States had “no information” about the strike.

The strike on the Makarov comes just three weeks after the Ukrainian military sunk the Moskova, the Russian navy’s flagship in the maritime blockade of Ukraine. That ship was also hit by a Neptune missile, an indigenously developed system.

Henry Hendrix, a retired US Navy Captain and maritime strategist told National Review that the strike was a “significant blow” to Russia.

The Makarov, an Admiral Grigorovich-class frigate, is one of Russia’s newest naval ships, having been commissioned in 2017, and is described as one of the most powerful ships in the Black Sea. Two other ships of her class, the Admiral Grigorovich and Admiral Essen, are participating in hostilities with Ukrainian forces, which began in February after Russian President Vladimir Putin ordered an invasion of the country.