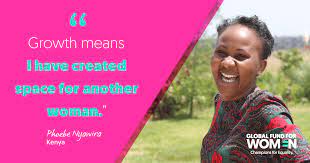 Should men and women be treated equally, or should they be treated as equals? What is the difference, and does it matter? To commemorate International Women’s Day on March8, 2009, one man shares his perspective.

This memoir of personal reflection is dedicated to my dear wife, Katindi, my sisters and to all of Africa’s women who refuse to be restricted to the space society has assigned to them, and thereby reject the invitation to become children of a lesser god.

I anchor it in the Book of Galatians 3:28, which says, “There is neither Jew nor Greek, slave nor free, male nor female.”

It was such a novelty. There she was hanging out by the open door of bus No.46, a minibus, as it approached the bus stop. It was in December and I was making my way from Yaya Centre to the Kenya Human Rights Commission at Valley Arcade. The matatu stopped, I embarked, she blew the whistle and hit the side of the minibus and we were on our way.

She must have noticed me staring at her as she busied herself controlling an all-male crew during our short ride to the arcade. She was young, she was fit, she was agile, she was competent and she was obviously enjoying her job stopping the matatu to pick up and drop passengers.

All too soon, it was my turn to disembark and I remember feeling a mixture of sadness and fascination as I stepped out onto the curb and prepared to cross the road.

“Keep shattering the stereotypes, sister,” I managed to tell her just as she blew the whistle and the matatu got on its way again.

“Thank you,” she shouted back with a smile, and soon they were both out of sight, hurtling cheerily towards Kawangware.

Such scenes are unfortunately all too rare in our country. Being a public service vehicle (PSV) conductor, alongside countless other jobs, is categorised as “unfit for the girls”, regardless of whether or not our sisters might have liked to try their hand at it, like this young woman was so ably doing now.

It makes one wonder how many dreams over the centuries have been broken to smithereens, shattered against the wall of stereotype. Worse, how many could not be born and natured in the first place because they were aborted in the maternity ward even as some hapless young woman was taking her first breath of life, merely because she happened to be born a girl.

Relations between the sexes have attracted many a controversy all over the world; and minds better than my own have penned volumes of opinions regarding men, women, society and equality. I do not know much about feminism or the pros and cons of so-called women’s liberation, but one thing troubles me a great deal. Today, Africa is facing some of the worst crises since slavery.

We are grappling for solutions to problems too big for any one gender to contemplate let alone begin to unravel.

In this state of emergency, we must ask ourselves this uncomfortable question: with all the enemies lined up against us, with all the devious plots and schemes hatched to ensure that we remain ‘the wretched of the earth’, with all the challenges and scourges that threaten to annihilate us as a people and wipe us out as a nation, can we afford to go to war half-fettered and half-free?

I was raised in the small dusty industrial town of Thika, among eight remarkable women – my mother and seven sisters. I was the second-last born (my twin sister, coming hot on my heels to complete the set of 11 children in all). By the time I went to school I had learned a great deal just from listening to or overhearing my sisters doing their homework.

When I went to school, it was my sisters who took the time to help me with my homework. They laid a firm foundation for the person that I am today. Sadly, although they played such a vital role in showing me the way, none of them attained to half their own true potential. And that is not because they lacked the talent or intelligence. It is because they were women.

This way, slowly but surely, by default or by design, a glass ceiling is firmly put in place. In most cases it turns out to be shatterproof, confining the better half of us to the lower echelons of society.

Because I have a twin sister, I have had the rare opportunity to see this discrimination first hand, almost like looking into the mirror and seeing something other than the reflection that you’d expected to find there.

My sister recently confessed to me that when we were children, she had always felt like my shadow, and did not see the need to work hard and achieve for herself because it was not really expected of her. Today, she has done quite well for herself; but I am willing to bet that had she been born a boy she would have gone so much further. And every time I see women walking on the street, I can’t help wondering how many of them have really achieved all that they were truly capable of.

There must be less than ten percent. And one cannot help asking oneself, surely can any society afford to waste so much potential and expect to come out on top in an increasingly competitive world? I think not.

I often meet people who have read my writings or heard about me but have never met me in person before. A surprising number of them make the same comment: I thought you were much taller! And I want to put the record straight here by stating, “Actually I am really quite short. But if I look tall, it is because I stand on the shoulders of the women in my life. Women, who have inspired and taught, nurtured and poured their lives into me; many of them having no choice but to cheer me on because they could not finish their own leg, as the lane assigned to them in this treacherous race was filled with obstacles right from the starting block to the finishing line.”

There was an unspoken rule in our community when I was growing up in Thika in the 1970s, that the only attention that should be paid to the girls was what was necessary just so that they did not stray and get pregnant out of wedlock.

In fact, in retrospect, one almost felt like they were kept busy in school just to keep them on the straight and narrow until time was ripe for them to get married. Today, the same reality still confronts so many. Is it any wonder then that, for many women getting married is still regarded as the ultimate achievement in life?

Boys on the other hand were constantly reminded that the home and the community belonged to them and that they must work very hard to perpetuate the family name. The boy was expected to be tops, the girl was expected to be average. Why? Because she would get married and leave; He on the other hand would carry forward the family name and you must be fully prepared for the task.

This article was first written in 1999. It was published in Eve Magazine in March 2002 and this version was published to mark Women’s Day in 2009.

Tackling post-PhD imposter syndrome: Struggle is normal, but accepting reality gives you a sense of control

Guys, pause for a moment and listen to what our sisters want: ‘Give me a place to stand, to speak…’