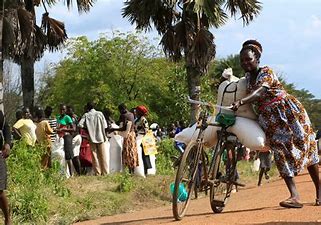 Political divides are at the root of the displacement of the Shilluk and must be resolved before sustainable and equitable returns can take place. Yet, if returns are to occur – in the run-up to next year’s polls – various electoral processes will likely lead to violent contestations over administrative power and land, complicating any such resolution of political divisions in places like Upper Nile.

Even if issues over administrative power can be resolved, the civil war has transformed the way that South Sudanese people inhabit their country, making a simple model of returns, where people head back to their rural homes – difficult to envisage.

The war has accelerated a process of urbanisation, as people have become increasingly reliant on markets and wage labour, while insecurity and land occupation issues have made small-scale agriculture hard to sustain. Few families will return to the rural south of Unity from the displacement camp in Bentiu, and, if they do, it will likely only be part of the family and for part of the year.

Humanitarian agencies must therefore reckon with the fact that people will not always return to a single place. Instead, families will spread themselves between different areas in order to maximise access to resources under conditions of extreme hardship.

The humanitarian sector traditionally views the decision to return home in binary terms: as either voluntary or involuntary. But in a situation where the government exerts different forms of pressure on people to move – and where humanitarian service provision can be a significant draw for communities – the distinction between free returns and forced returns isn’t always clear cut.

Government manipulation of returns is a looming problem for the humanitarian sector, whose assistance has long been used as a tool of war by the country’s various belligerent parties.

For example, in 2015, in southern Unity state, the government declared certain areas safe zones for civilians, and allowed humanitarian agencies to distribute resources there, while the rest of the region was subject to raiding from government-aligned militias.

Humanitarian provision of resources and services became a way for the government to draw rebel-aligned populations into government-run areas, where they could be controlled, while the rest of the state was depopulated, leaving it more vulnerable to attack.

A recent population transfer in Upper Nile state exemplifies the difficulties humanitarian actors face when deciding if and when to facilitate returns, given government manipulation of the sector.

In December 2020, the UN’s emergency aid coordination body, Office for the Coordination of Humanitarian Affairs (OCHA), received a request from James Tor Monybuny, a Padang Dinka official, asking agencies to transfer displaced Padang Dinka from Upper Nile’s Melut county, where they had fled during the war, back to nearby Baliet, their home county.

The Upper Nile Solutions Working Group (UNSWG), which coordinates humanitarian efforts in the state decided to help and facilitate these returns, according to UNHCR’s Glazunova.

But several aid workers said the transfer, which took place from April to May 2021 and saw a total of 5,654 people returned to Melut, went ahead despite the objections of many humanitarian agencies.

The critical aid workers pointed out that Baliet is one of the areas in Upper Nile from which the Shilluk were forcibly expelled during the civil war, and where administrative control is currently contested between the Shilluk and Padang Dinka.

Enabling the Padang Dinka to return to Baliet while ethnic Shilluk remain displaced could therefore help hardwire a demographic majority into a politically contested county ahead of future elections.

That context was ignored, however, in a UNSWG report that followed an April 2021 evaluation mission to Baliet. Seen by The New Humanitarian, the report called the county “ethnically homogenous” and omitted any mention of past Shilluk presence.

Approval for the transfer, meanwhile, didn’t come from the office of the current Shilluk governor of Upper Nile – Abudhok Ayang Kur – but rather from Monybuny, who is the state’s deputy governor. He has effectively marginalised his superior.

As well as the danger posed by facilitating returns to a contested area, aid workers worried about transferring people at a time when there was active recruitment of militia forces in Baliet, following February 2021 clashes between Padang Dinka and Nuer youth.

These concerns were raised by international NGOs in the country, but they were not addressed, according to Aleem, the former NRC protection officer. “Concerns about conflict sensitivity were flagged… earlier in the year,” she said. “Unfortunately, some pushing this return took a black-and-white view of it, while individuals who questioned the wisdom of the operation were actively sidelined.”

In the end, many of the Padang Dinka transferred to Baliet returned to Melut in August 2021, after record flooding swept through both county and country, uprooting hundreds of thousands of people.

The UNHCR has named a number of areas in South Sudan “pockets of hope” – areas to which people can supposedly safely return – and in which the UNHCR could assist “spontaneous returns”. One such area is Magwi, in Eastern Equatoria state, where, in December 2021, soldiers threatened spontaneous returnees with violence and accused them of being rebels.

Opponents of facilitating wholesale returns fear that without addressing the political issues that created population displacement in the first place, returns are likely to create an unequal landscape in which only some groups can go home. Such returns, they say, risk inflaming the political tensions created by the war rather than resolving them.