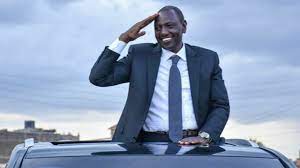 The profiling of Ruto follows an incident in February 2020, an international scandal was surfaced when polish investors were targeted by his allies in a $4 billon weapons deal. Th deal was allegedly brokered by Ruto’s daughter (June Ruto).

June was posted to the embassy in Poland despite lacking the appropriate experience for such a posting, leave alone negotiate for arms for the military.

Taking advantage of the lax security of his office, Ruto’s allies had lured the investors to Nairobi to sign a deal with the government but ultimately failed when the scam was exposed at the eleventh hour. This close call attracted the attention of the office Director of Public Prosecutions who opened investigations into the dealings of the office of the deputy president.

The investigations revealed three years’ worth of fraudulent dealings where both local and foreign investors that were lured into Ruto’s orbit were defrauded of $3 billion in a tendering scam for the supply laptops and learning equipment, hospital equipment and office supplies.

The crooks in Ruto inner circle also exposed in two gold scams that threatened international relations between Kenya and United Arab Emirates (UAE). A Dubai-based businessman reportedly lost nearly $4 million when a Ruto ally conned him out of the money. The man had promised to deliver gold from the Democratic Republic of Congo to the businessman’s home country.

Another Dubai-based businessman lost $2.5 million after being conned by another Ruto ally hose names investigators refer to as Kennedy Otieno. Both businessmen formally complained to their embassy and travelled to Kenya to pursue justice against the two men, sparking a standoff between Abu Dhabi and Nairobi, which was settled following the arrest of the two men.

However, under unclear circumstances the two conmen were released following an order from Ruto and a settlement reached between the office of the deputy president and the Dubai-based businessmen, according to investigators.

Ruto and members of his inner circle are also been known to have caused a diplomatic crisis with Kenya’s closest neighbours – Uganda and Tanzania. A long-time ally known as Don Bosco was recently released from Tanzanian after he was sentenced for money laundering and conducting business illegally across the border.

In a scheme Tanzania authorities describe “as running for multiple years, Mr Bosco would arrive in Tanzania with millions of Kenyan currency and run through multiple shell corporations to change it into Tanzanian currency, which would be returned to Kenya as clean money and reconverted into Kenyan currency for use in Mr Ruto’s schemes.”

The latest scheme involved the foiled smuggling into Uganda of terror suspect Harun Aydin through the deputy president for a private visit to Uganda, according to Turkish investigators.

They say, “Mr Aydin is a Turkish national whose entry and business in Kenya was sponsored by Ruto who introduced him as an investor. However, authorities in Kenya and Uganda were unable to verify Mr Aydin’s business credentials and investment portfolio and before he could be investigated thoroughly Mr Aydin was transported from Kenya under yet more unclear circumstances.”

It would later be revealed by Ugandan authorities that Mr Aydin was not cleared to enter the country and his planned trip with Kenya’s deputy president would have caused a diplomatic scandal given his previous arrest related to terrorism.

They say that following his arrest by German anti-terror forces Mr Aydin was reportedly connected with anti-Erdoğan leader Fethullah Gulen who is accused by Ankara od sponsoring the failed coup to oust president Erdogan and leading the death of hundreds.

Turkey accused Kenya, and particularly Ruto, of harbouring enemies of the Turkish government by collaborating with Uganda to allow training of hostile forces. The allegations nearly led to a diplomatic standoff and at worst allowing the establishment of radicalised elements that would threaten global peace to safe territory.

Ruto’s office has been unable to explain why he made a phone call to a local bank seeking a multimillion-dollar loan for Aydin, the purpose of which Turkish government argues is continued funding of Gulen’s anti-government activities.

The picture painted by Ruto and his inner circle is one of concern. On the International stage, those connected to him, including his daughters, are linked to scams that are, at lowest, steal millions from individuals, and at the highest threaten diplomatic mayhem.

Politicians and businessmen allied to him paint a similar picture on the home front with at least four under investigation for embezzlement and four in court over corruption charges.

Should Mr Ruto be successful in his presidential bid it is guaranteed his inner circle will be that much closer to national resources and wealth.

What is not guaranteed is whether the country will survive the leadership supported by this inner circle. A council inspired by greed, conmanship and individual gratification above national interests, national and international intelligence reports say.