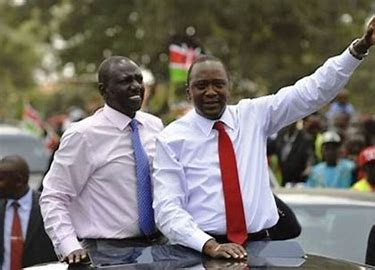 Kenya Deputy President William is increasingly coming under fire for his alleged involvement in corruption and related economic crimes that run into billions of dollars.

After nearly two years of running a campaign that was premised on hoisting the poor and downtrodden to economic glory via “Hustler Nation” slogan he is coming up against stiff resistance from his former allies, President Uhuru Kenyatta, being one of them.

In 2013, Kenyatta and Ruto teamed up in what then was described as a “union of convenience” that appealed to the sympathy of the electorate and ethnic loyalties as they fought off allegations of crimes against humanity.

The Hague-based international Crimes Court (ICC) wanted them to face genocide-related charges as prime suspects in the 2007-2008 post-election violence in which 1,133 people were killed and more than 600,000 were uprooted from their homes and farms.

After more than 10 years of indifference to the deputy president’s massive wealth, senior government officials have in recent months been challenging him to come clear on allegations of corruption, tribalism and abuse of power.

Allegations of economic sabotage and capital crimes after Interior Cabinet Secretary Fred Matiang’i accused him of building a vast financial empire in just seven years since he and President Uhuru Kenyatta controversially took power in 2013 have not been answered.

Ruto only denied that he owns a ranch in Laikipia, which has in the past three months been the theatre interethnic fighting over pasture and water resources.

In response, Ruto said the statement was an exaggeration to make him look bad in the eyes of the electorate and foreign development partners.

Save for a few countries in eastern Africa, Ruto is said to be on the blacklist of many Europe countries and the United States for his role in the 2007-2008 post-election violence, for which has been absolved by The Hague-based International Criminal Court.

The persona non-grata means he is barred from visiting those countries, and, indeed, Ruto has not visited Europe or the US for nearly 10 years.

According to Ruto’s accusers, among them Jubilee Party secretary-general Jubilee Raphael Tuju, the money illicitly acquired by deputy president is stashed in foreign bank accounts or held locally in fixed assets such as land, real estate and businesses.

Mr Tuju in particular has been forthright that the monies are proceeds of economic crimes and has attracted foreign as well as local interest as the East Africa nation prepares for elections next year in which Ruto will be a key player.

In a statement, Tuju said of Ruto, “By his own account, the Deputy President is on video record when he told Kenyans that he was worth 100 million Kenya shillings in the year 2015. In the intervening seven years, he has ‘worked very hard’ in his businesses and now therefore he has assets like choppers, hotels and land worth billions of shillings.”

The deputy president denies the allegations and likens them to fear and jealousy informed by the prospect of hoi polloi challenging what describes as the “dynasties” of Kenyan politics. The deputy president has profiled himself as an offshoot of the wretched of the earth poised to oust the dynastic grip on power and its key pillar – the economy.

Instructively, the DP has not denied owning huge swathes of land around the country including the roughly 3,000-acre ranch in troubled Laikipia county he was recently linked to.

Other than public statements, however, Ruto’s accusers have never gone to court to compel him to account for the source of his seemingly massive election war chest. Alternatively, a parliamentary process would help the public peek into wealth accumulated in the period he has been in office, and if there is a link to abuse of power.

President Kenyatta will be exiting power at the expiry of his second five-year term on August 9, 2022, but he looks set to manage his succession in the hope of handing over the baton to a more amenable office holder.

So far, Kenyatta has succeeded in bringing his rivals in the 2013 and 2017 presidential elections to his column and determined to eschew his cavalier deputy. The president now blames his deputy for the failures of his government during his first term in power.

As Kenya prepares for another election, voter focus is on the character of the only co fighting to be in the inner circle of the only man who has declared himself the only candidate in crowded field of future presidents, Mr William Ruto.