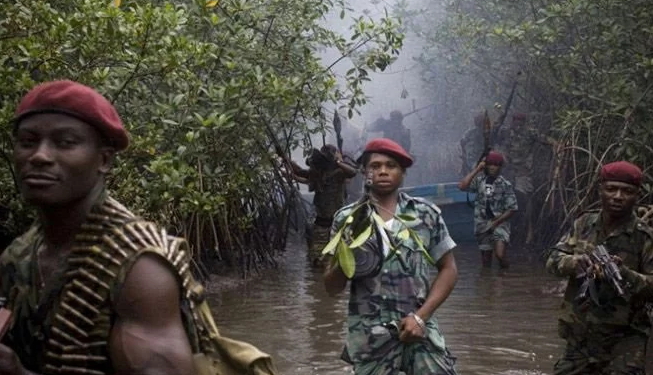 Niger government officials have sought to downplay the ethnic colouration of recent massacres in Niger Delta. Although Islamic State in the Greater Sahara (ISGS) has recruited mostly from Fulani groups, officials point out that ethnic Zarma and members of other communities have also joined them.

Still, local analysts and residents fear the possibility of wider inter-communal violence should vigilantes start indiscriminately targeting Fulani communities, a conflict trend that has played out in devastating ways in both Burkina Faso and Mali.

“While Fulani are usually stigmatised and seen as terrorists, these newly-built militias behave exactly like the Islamic State,” said Diallo, citing several reports and video footage he has received from residents of Tillabéri and Tahoua.

Despite the risk of further violence, thousands of recently displaced people have been pressured to return to their homes by the government, according to aid workers and affected individuals.

Shortly after the attacks in Anzourou, for example, the government announced that the area had been secured by soldiers. Military trucks then transported residents from the stadium to their villages.

Threats of withdrawing humanitarian assistance were used to encourage the returns, said a senior aid official working for an international organisation who asked not to be named, citing the sensitivity of the issue.

“If they stayed [in displacement sites], they were left with nothing; if they returned, they had humanitarian assistance,” said the senior aid official. “These returns weren’t violent, but they were forced.”

The aid official added that the return operation had military objectives: to avoid leaving large, unpopulated areas in Tillabéri where ISGS could set up a more permanent presence.

Abdou, the official from the Ministry of Humanitarian Action, did not comment on whether aid was withdrawn from displaced people, but confirmed that returnees were given assistance by the government and “international partners”.

The official conceded that attacks have continued in areas to which displaced people returned. “After an initial lull, attacks resumed in some villages [of Anzourou],” Abdou said. “Terrorists know very well the army’s movements and strike at the right moment.”

Anzourou farmer Himou Larabou agreed with that assessment. “By returning people, the state is exposing them to more violence,” he said. “Terrorists have a network; they know local families and they know the area much better than the military.”

As displacement has increased, aid groups say they are also facing growing challenges assisting those in need and negotiating with an ever-expanding number of armed militias.

Paolo Cernuschi, country director in Niger for the International Rescue Committee, described humanitarian access as one of the organisation’s “main headaches”, with conflict-affected rural communities along the Malian border “completely out of reach” for most aid agencies.

Neutrality concerns are also an issue for aid groups. Shortly after an ISGS attack left six aid workers and their guide and driver dead in August 2020, the government demanded organisations in Tillabéri use military escorts. Before then, escorts had only been required in high-risk border areas.

Authorities reviewed the system in May 2021 after aid groups complained it could invite attacks against them and compromise their humanitarian principles, according to Cernuschi. But escorts are still imposed on a “case-by-case” basis by local authorities, Cernuschi said.

“While escorts can be used as a last resort where necessary to save human lives – and are being used in some cases – they should not be the standard approach,” Cernuschi added.

As the situation worsens, local analysts and civil society groups said the government and its foreign partners should consider measures that go beyond the current military campaign.

Though top commanders have been killed in recent strikes – ISGS’s founder was reportedly killed by French forces last month – new leaders have “replaced them and might be more reluctant to negotiate,” said Oumar Sanda, an analyst and former government official.

One idea gaining traction in the Sahel is direct talks between governments and jihadists. Niger’s newly elected President Mohamed Bazoum had opened up lines of communication with ISGS in his previous role as the country’s interior minister, though he seems reluctant to do so again.

Tarka of HACP said the government has another trick up its sleeves: it plans to open a centre to reintegrate repentant jihadists, a path previously taken in southwestern Niger for former members of Boko Haram.

Tarka provided little further information on the project when asked, however. And while prior HACP initiatives have had some success in demobilising insurgents, efforts have been hindered by poor coordination and a lack of trust in the institution among some local communities.

Direct dialogue between communities and jihadists could offer another way out of conflict. Such talks have led to recent agreements in Burkina Faso and Mali, significantly cooling tensions and kickstarting livelihoods.

Some local residents in Tillabéri said the grounds for reconciliation have already been exhausted, however.

“We paid them taxes [and] respected their rules,” said Moumouni of Darey Dey. “They told us that if we spoke with the soldiers or with humanitarians they would kill us; we obeyed [again] because we just wanted to stay there. But it wasn’t enough.”