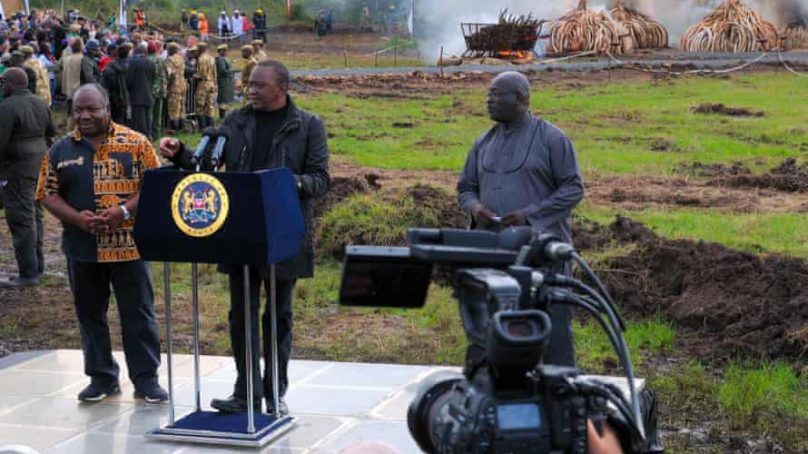 Kenya’s President Uhuru Kenyatta and Ali Bongo of Gabon top the list of African leaders named in the Pandora Papers investigation as hiding assets in offshore tax havens. Incidentally, the two are friends, with President having visited Nairobi in 2016 in a show of solidarity.

Kenya’s President Kenyatta is known for his war on graft, but now his family is accused of shielding money from public scrutiny, a development that is now expected to dominate political discourse that the east African nation prepares for election in August 12022.

A section of the ruling party Jubilee led by Deputy President William Ruto has already cast Kenyatta as a “dynast” keen to influence his family’s influence long after he exits power. Kenyatta has since March 2019 been trying to manage his own succession through support for his opponent in the disputed 2017 presidential election, Raila Odinga, as symbolised by “a handshake” that could be a turning point in the county’s political power set up.

The burying of the hatched between the president and his main rival eased ethnic tensions and paved the way to a collaboration between the governing Jubilee Party and Mr Odinga’s Orange Democratic Movement.

The Pandora Papers are a massive trove of nearly 12 million confidential documents that were leaked to the International Consortium of Investigative Journalists (ICIJ).

The tax documents expose secretive offshore financial structures and trusts in tax havens, thereby casting a light on the shadowy financial tactics of the world’s powerful, including those in Africa.

Which African leaders and families are implicated? The ICIJ investigation found that nearly 50 politicians and public officials from 18 African countries had connections to offshore entities. The most important include:

Thhe highest concentration of Pandora tax evaders are in Eurasia. Fewer African officials were unmasked in the papers, but the list is distinguished.

Leaked records show that Kenyatta’s family has been “secretly accumulating a personal fortune behind offshore corporate veils,” the ICIJ finds.

Kenyatta, along with his mother, sisters and brother, owned assets worth more than $30 million (€25.8 million), according to Pandora Papers records. These assets were shielded “from public scrutiny through foundations and companies in tax havens” in Panama and the British Virgin Islands.

Shell companies created on the British Virgin Islands allow their owners to avoid registering their names in public, as do foundations set up in Panama. According to the records, seven members of Kenyatta’s family are connected to 11 offshore entities. It isn’t, however, always clear, what assets these entities held, and what they were used for.

“One had a bank account that held an investment portfolio worth $31.6 million in 2016; another had unspecified investments at a bank in London,” the ICIJ wrote.

In recent years, President Kenyatta has painted himself as a vigorous anti-corruption reformer. He vowed to fight graft in the run-up to the 2017 elections. Kenyatta and his family did not reply to ICIJ’s requests for comment.

President Sassou Nguesso owned a company that controlled diamond mines in the Congo “that are among the country’s most valuable assets,” the ICIJ investigation finds. Sassou Nguesso’s ownership of the mines in the resource-rich country was not previously known.

According to the ICIJ, Sassou Nguesso’s ownership was shielded by incorporating the company in the British Virgin Islands. The Sassou-Nguesso family has controlled the government in the Republic of Congo for nearly 40 years, a rule marked by extensive corruption and embezzlement of their nation’s wealth, according to other investigations by anti-corruption organizations, such as Global Witness.

Ali Bongo’s family has been involved in the country’s politics for more than 50 years, and for nearly as long, the family has been accused of plundering state coffers. His father, Omar Bongo, ruled Gabon with an iron fist for more than 40 years until his death in 2009, when he was succeeded by Ali Bongo. French and US authorities have previously investigated the family for corruption.

Leaked documents show that in 1998, when he was an adviser to the minister of energy, Achi became the owner of a company based in the Bahamas. His ownership, which continued until at least 2006, was obscured through a trust arrangement.

Less than a month before he was dismissed as prime minister in 2012, Aires Ali used a Swiss tax consultancy to create a shell company in the Seychelles, the leaked documents show.

Another firm provided the company with a shareholder and directors, thereby obscuring who owned it. Ali, a long-term career politician, later authorised the company to open a bank account with a Lisbon-based firm. The company’s purpose isn’t revealed in the Pandora Papers.

Jim Muhwezi, who is related by marriage to Uganda’s President Yoweri Museveni, owned and held shares in two shell companies, one set up in the British Virgin Islands and another which was created in Cyprus.