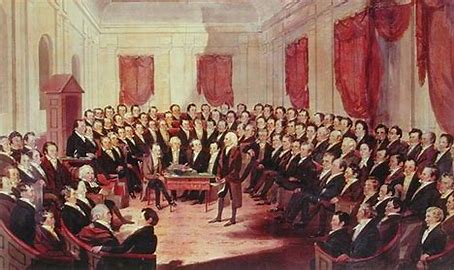 In the run up to the 2020 elections in the US, ProCon.org reminded the electorate of the role of politic parties in deciding who should lead them. The organisation reminded voters that “political parties are groups of individuals organised for the purpose of electing candidates to public office.”

Notably, the American Constitution does not mention parties and the Framers regarded them as undesirable or even dangerous. Nonetheless, the federal structure and electoral institutions they created give ample incentives for party building.

As an example, Muirhead points to the US Farm Bill, which the two parties renegotiate roughly every five years. Each time they sit down, “the Democrats want food support for urban people and Republicans want support for farmers and somehow they always come to an agreement,” Muirhead says. “The alternative is favoring one side or simply passing nothing at all.”

Perhaps most important, America’s two main parties have traditionally cooperated in acknowledging their opponents’ legitimacy, as Rosenblum and Muirhead write. Other nations, such as Thailand, Turkey and Germany, have banned political parties that their governments have seen as too destabilising to democracy.

American parties’ cooperation has helped keep the peace by reassuring US voters that even if they lose today, they may well win tomorrow. Now, however, this fundamental rule is being broken, say Rosenblum, Muirhead and others, with some party leaders even accusing their opponents of treason.

“The key thing going on now is that we have an explicit argument that the opposition party is illegitimate,” says Rosenblum. “Trump has been calling the Democrats the enemy of the people and illegitimate, and saying the election is fraudulent. This is the path to violence, as there’s no way to correct this with another election.”

Political parties throughout the world have lost considerable goodwill and influence, says Ian Shapiro, a political scientist at Yale. Yet Shapiro suggests that rather than ban them or further sap their power we must strengthen them and make them more reliable.

He and his colleagues advocate reforming campaign financing to eliminate the currently chaotic bidding wars for candidates’ loyalties, although that goal continues to be elusive. To combat the rise in extremism, they also urge that the job of redistricting go to nonpartisan commissions instead of gerrymandering politicians.

To further reduce the risk of primaries increasing polarisation, Shapiro proposes that party leaders be allowed to choose candidates if the turnout in a primary election has fallen below 75 per cent of the turnout in the previous general election.

Hélène Landemore, a political scientist at Yale University and her faction contend these ideas don’t match the urgency of the current dilemma. She invites people to imagine how democracy might function with less or even zero reliance on political parties and particularly without costly and potentially corrupting political campaigns. One possibility, she says, would be to randomly appoint groups of citizens, chosen much as today’s juries are, to lead government, while rotating in fixed terms through a permanent “House of the People.”

These citizens’ assemblies would be more representative than the current US Congress, wrote Rutgers University philosopher Alexander Guerrero in a 2019 opinion piece for NJ.com, in which he advocated choosing representatives by lottery.

“In the United States, 140 of the 535 people serving in Congress have a net worth over $2 million, 78 per cent are male, 83 per cent are white, and more than 50 per cent were previously lawyers or businesspeople,” he wrote.

In December 2020, French President Emmanuel Macron agreed to hold a referendum on one of the convention’s suggestions, the inclusion of climate protection in the national constitution. And in 2016, the Irish Parliament assembled 99 citizens to deliberate on stubborn issues, including a constitutional ban on abortion.

A majority of the assembly proposed that the ban be struck down, after which a national referendum confirmed the result and changed the law – all accomplished without involvement of established political parties.

Despite the limited impact of these efforts to date, Landemore says the tide of public opinion is turning. Just five years ago, colleagues mocked the notion of an “open democracy” at a political science conference, she says, adding: “Five years from now I’m guessing we’ll be completely mainstream.”