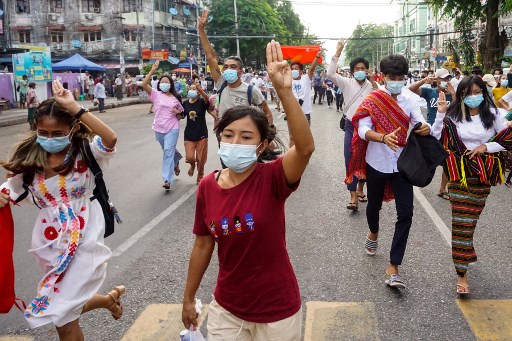 A governing military junta-controlled court in Myanmar has sentenced Aung Kyaw, a reporter with the Democratic Voice of Burma, and Ko Zaw Zaw, a freelance reporter with Mizzima News, under a colonial-era law to two years in prison.

Following the sentences, the International Federation of Journalists (IFJ) has condemned the junta’s use of Section 505(a) of the Penal Code to violate press freedom and violation of human rights of the two journalists.

Aung Kyaw and Ko Zaw Zaw have both been sentenced to two years in jail by the military court of Myanmar for allegedly spreading misinformation. The two journalists were charged under a newly revised law that criminalises the spread of misinformation that could “abet mutiny.”

During the hearing, Aung Kyaw represented himself as his lawyer was threatened by the military, according to a statement from the Democratic Voice of Burma.

Aung Kyaw was the second journalist from DVB to be convicted since the coup began, alongside Min Nyo, a DVB reporter who was slapped with a three-year jail term for covering anti-military demonstrations.

Similarly, Mizzima said, “Under section 505(a), another ten journalists of Mizzima have been included in the process of prosecution inside prison.”

The military coup and civil war have led to increased violations on the media by Myanmar’s military in recent months. IFJ reporting has found that since the start of the military coup on February 1, at least 87 journalists have been arrested, 45 have been detained and 46 have been prosecuted.

The military’s assault on journalists in Myanmar means that journalists are required to hide their identities or be attacked, resulting in a climate of fear and a democratic deficit for the people of Myanmar.

The IFJ said: “Sentencing journalists to jail because of a claim they are spreading false news is a gratuitous condemnation of free speech and free media. The IFJ urges Myanmar’s military to release detained and arrested journalists and to reform its penal code that has stripped journalists of their rights”.