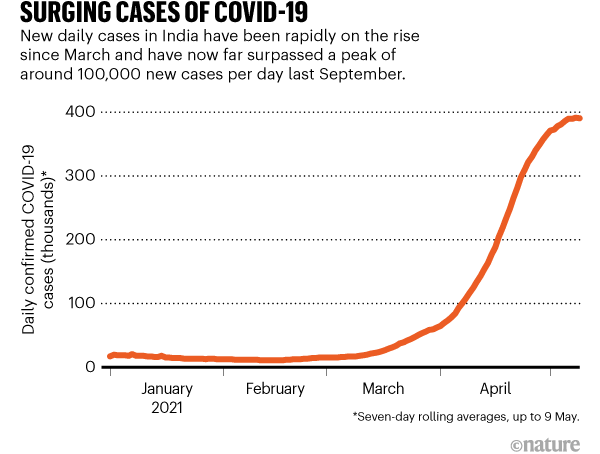 Scientists are working to understand several coronavirus variants now circulating in India, where a ferocious second wave of Covid-19 has devastated the nation and caught authorities unawares.

The country recorded nearly 400,000 new infections on May 9, taking its total to more than 22 million.

Evidence is growing that one variant first detected in India might be more transmissible and slightly better at evading immunity than existing variants. Animal models also hint that it might be able to cause more severe disease.

Researchers want to know if this variant and others might be driving the second wave and what kind of danger they pose globally.

In just a few weeks, the B.1.617 variant has become the dominant strain across India and has spread to about 40 nations, including the United Kingdom, Fiji and Singapore.

Two weeks ago, it looked as if multiple variants were behind a series of surges in India. Genomic data indicated that B.1.1.7, first identified in the United Kingdom, was dominant in Delhi and the state of Punjab, and a new variant dubbed B.1.618 was present in West Bengal. B.1.617 was dominant in Maharashtra.

But since then, B.1.617 has overtaken B.1.618 in West Bengal, has become the leading variant in many states and is increasing rapidly in Delhi. “In some states, the surge can be tied to 617,” Sujeet Singh, director of the National Centre for Disease Control, based in New Delhi, told journalists on May 5.

Some say this could indicate that the variant is highly transmissible. “Its prevalence has increased over other variants in much of India, suggesting that it has better ‘fitness’ over those variants,” says Shahid Jameel, a virologist at Ashoka University in Sonipat who chairs the scientific advisory group of the Indian SARS-CoV-2 Genome Sequencing Consortia (INSACOG).

Ravindra Gupta, a virologist at the University of Cambridge, UK, agrees that it is “highly likely to be more transmissible.”

On Monday the World Health Organization (WHO) designated B.1.617 a ‘variant of concern’. Variants are classified in this way when there is evidence that they spread more rapidly, cause more severe disease or evade previously acquired immunity better than circulating versions of the virus.

On May 7, the UK government already declared the B.1.617.2 subtype a variant of concern in the United Kingdom. It revealed that recorded B.1.617.2 infections in the country had risen from 202 to 520 in a single week.

Several other variants of concern have had a significant impact globally. These include B.1.351, which was identified in South Africa in late 2020; studies suggesting that the University of Oxford-AstraZeneca jab is less effective against that variant led to the nation suspending its roll-out.

Similarly, the P.1 variant, which is able to evade some immunity, contributed to a major second wave in Brazil early this year. And the highly transmissible B.1.1.7 strain emerged in the United Kingdom in late 2020 and led to a surge of cases there and elsewhere.

Data on B.1.617 are only just trickling out, but a mosaic of findings hints that it has an edge over variants already circulating in India.

Indian scientists first detected B.1.617 in a few samples in October. INSACOG ramped up surveillance in late January in response to a rising number of variants, and scientists noticed that B.1.617 was on the rise in Maharashtra.

By mid-February, it accounted for 60 per cent of cases there, says Priya Abraham, director of the National Institute of Virology (NIV) in Pune. Since then, multiple sub-lineages have emerged.

In a detailed genomic and structural analysis of B.1.617 published as a preprint on May 3, NIV scientists identified eight mutations in the virus’s spike protein, through which it gains entry to cells. Two of them look similar to mutations that have allowed other variants of concern to become more transmissible, and a third resembles a mutation that may have allowed P.1 to partially evade immunity.

The genomics work was backed up days later by a preprint from a team in Germany, which shows that B.1.617 is moderately better than an earlier variant at entering human intestine and lung cells in the lab.

It is unclear whether this “minor” advantage could lead to more spread in the real world, says lead author Markus Hoffman, an infection biologist at the Leibniz Institute for Primate Research in Göttingen.

Small studies in animals suggest that the variant could cause more severe disease. In a May 5 preprint, a team led by virologist Pragya Yadav at the NIV found that hamsters infected with B.1.617 had more inflammation in their lungs than did animals infected with other variants.

Gupta says this research shows that B.1.617 has enhanced potential to cause disease. But he cautions that “it’s difficult to extrapolate from hamsters to humans,” and says that data on disease severity in people are needed.

Research from Gupta’s own lab suggests that antibodies are slightly less effective against the variant than against others. The team collected blood serum from nine people who had received one dose of the Pfizer vaccine and tested it against a harmless carrier virus modified to contain the SARS-CoV-2 spike protein, with the mutations from B.1.617.

Serum from vaccinated individuals typically contains antibodies that can block, or ‘neutralize’, the virus and prevent cells from getting infected.

Gupta’s team discovered that neutralising antibodies generated by the vaccinated individuals were about 80 per cent less potent against some of the mutations in B.1.617, although this would not render vaccination ineffective, he says.

The researchers also found that some health-care workers in Delhi who had been vaccinated with Covishield, an Indian version of the Oxford-AstraZeneca vaccine, had become reinfected, with most cases tied to B.1.617.

Similarly, the German team tested serum from 15 people who had previously been infected with SARS-CoV-2 and found that their antibodies neutralised B.1.617 about 50 per cent less effectively than previously circulating strains. When they tested serum from participants who’d had two shots of the Pfizer vaccine, they found that the antibodies were about 67 per cent less potent against B.1.617.

Two other small studies, one from Yadav’s team testing the Covaxin vaccine made by Indian firm Bharat Biotech in Hyderabad, and an as-yet-unpublished study on Covishield, showed that the vaccines continue to work. But Yadav observed small drops in the effectiveness of neutralizing antibodies generated by the Covaxin vaccine.

The B.1.617 variant does seem to have an advantage over previously circulating versions of the virus, especially in individuals whose immunity is waning a while after previous infection or vaccination, says Hoffman.

But Gupta cautions that these lab studies all involve small groups and show smaller drops in antibody effectiveness, compared with what has been seen with other variants of concern.

Scientists also warn that experiments in serum are not always a good guide to whether a variant can evade immunity from a vaccine in the real world. Vaccines can cause the production of vast quantities of antibodies, so a dip in potency might not be significant. Furthermore, other parts of the immune system, such as T cells, may not be affected.

For example, the B.1.351 variant has been linked to much steeper drops in the potency of neutralizing antibodies, but studies in humans suggest that many vaccines remain highly effective against that variant, particularly at preventing severe disease.

For these reasons, the vaccines are likely to remain effective against B.1.617 and to limit severe disease. “The vaccine is still working,” says Yadav. “If you get vaccinated, you “will be protected, and the severity will be less”.

Nevertheless, “the surge in cases in India and scenes witnessed there is of grave concern internationally,” Nick Loman, a microbial genomicist and bioinformatician at the University of Birmingham, UK, told the Science Media Centre in London after the United Kingdom declared B.1.617.2 a variant of concern. “This variant will now be one to watch carefully.”