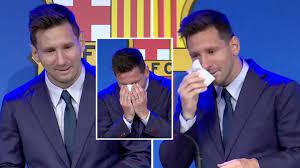 Lionel Messi broke down in tears as he confirmed his departure from Barcelona after 21 years at the club in an emotional press conference on Sunday, receiving a standing ovation from his distraught teammates.

The 34-year-old has been a free agent since July 1 when his contract at Camp Nou expired, although he had verbally agreed a new deal on reduced wages only for the Catalan club to pull the plug at the eleventh hour.

Barcelona claim La Liga’s spending limits meant they were unable to register Messi, although both they and Real Madrid rejected a league-wide investment deal that would have allowed them to keep the Argentine, but it was contingent on renouncing the Super League once and for all.

Messi moved to Catalunya from Rosario as a 13-year-old and enjoyed enormous success at the club, winning 10 La Liga titles, four Champions League crowns and the Ballon d’Or six times.

Speaking at an emotional press conference from Camp Nou, which was attended by the entire first-team squad, he says he was keen to continue at Barcelona and did “everything he could” to stay but it was not possible.

“I don’t know what to say here,” he began. “These recent days I’ve been thinking, giving lots of thought to what I could say, and the truth is that I can’t think of anything. This is really difficult for me after so many years being here my entire life.

“We always made this our home, we were at home, and we thought we would be staying here in Barcelona. The time we’ve had here in the city has been amazing. But wow, today I have to say goodbye to all of this.

“I’m been here so many years, my entire life, since I was 13. After 21 years I’m leaving with my wife, with my three little Catalan-Argentine kids and I can’t tell you everything we’ve lived in this city and I can’t say that in a few years we won’t come back, because this is our home and I promised my children that.

“I’m just really grateful for everything, all my teammates, all my former teammates, everyone at the club, everyone who has been by my side. There are so many people, even some I only met a few times. I have so much respect.

“So many beautiful things have happened – also some bad things – but all of this helped me to grow, helped me to improve, and made me the person that I am today. I gave everything for this club, for this shirt, from the first day I arrived until the very last.

“The truth is I’m leaving. I’m so grateful for the care people have shown me, I’d love to be able to go in a different way. I never imagined having to say goodbye because I never thought of it.

“Especially I imagined it with people on the pitch, the last cheers, but we’ve not been able to play in front of the fans.

With Messi out of Barca, Sergio Aguero considers following him two months after joining