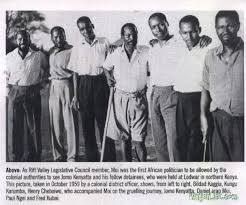 After years of silence, freedom fighter and businessman, the late Kung’u Karumba’s family has opened up with an appeal to the government to “remember” them.

When we sought them out, neighbours talked about the plight of the family of the independence hero who was detained in Kapenguria together with Kenya’s founding President Jomo Kenyatta, Paul Ngei, Achieng Oneko, Bildad Kaggia and Fred Kubai.

Interviewed, the neighbours appealed to the government of Uhuru Kenyatta to support the family of the late freedom fighter. Uhuru, who came to power in the 2013 election, is the son of the founding President Jomo Kenyatta.

Karumba’s family lives in object poverty, which began to bite seven years after he was declared dead according to the law. Karumba, a polygamist with three wives, had 12 children, most of whom are now over 60 years.

It is generally believed Karumba may have been assassinated by the Kenyatta regime as business rivalry between the two families deepened. After he was released from detention, Karumba declined a role in new government and instead chose to build his business empire that included transport, coffee and shops. He was also defiant to Kenyatta.

He disappeared during a business trip to Uganda in the mid-1970s and to this day, nobody knows the circumstances under which he “disappeared.”

Michael Njoroge, one of his sons, says attempts to reach out to the government for supports have not so far borne fruit. They have opted to use the media to beat the official red-tape is too complex and therefore chose to use the media. So far only The Star newspaper has published stories about the plight of the family with the rest giving it a wide berth.

Says Njoroge, “we are now appealing to President Uhuru Kenyatta to save us from this predicament as a token of appreciation of my father’s struggle for independence that is being enjoyed by people who played no part in the struggle.”

Karumba widows have since passed on. The following are the Karumbas who are still alive:

They invited two others: namely-