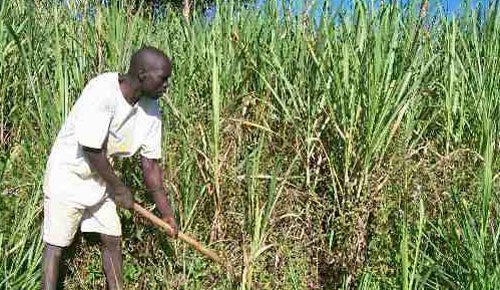 Hundreds of farmers in Migori County who have been growing sugarcane since 1979 as a cash crop are having second thoughts. From being ‘green gold’ to a lazy man’s crop, sugarcane has now acquired the tag of a poor man’s crop, thanks to abysmal returns from a cash crop that showed economic promise before tumbling.

For nearly four decades, the farmers believed they had succeeded in turning the sector into the backbone of the region’s economy. A decade after the first crop was planted, tales of how sugarcane had transformed the region known for fishing as the main economic activity are depressing.

Lake Victoria, produces over 65 per cent of the fish consumed in Kenya because of its proximity to Lake Victoria. The lake hosts the largest fishing community in Kenya with an estimated 44,263 fishers. Cane farming was therefore a welcome alternative economic activity.

In the late 1980s, sugarcane was introduced in the region to diversify its economy. Farmers were a happy lot, minting millions in cash from the “green gold”.

After the government announced plans to offload ownership of five sugar millers under its control, farmers in the sugar belt expressed fears that they were being exposed to the guiles and exploitation of the sugar barons accused of being behind the collapse of the industry that hitherto was the source of livelihoods for over seven million people.

In the late 1990s, when the economic fortunes started going south with the sole semi-autonomous government miller in the area, South Nyanza Sugar Company (Sony), registering heavy losses annually as farmers lament about low prices and late payments becoming the order of the day.

Almost 39 years into cane farming, the more than 50,000 farmers in the region still live in abject poverty and cannot pay school fees for their children, clothe them properly, offer them healthcare and provide other basic needs to their families.

From Kuria to Uriri, Rongo and Kabuoch in Homa Bay, sugarcane farmers are today a disappointed lot who accuse top players in the sector of betraying their hopes largely of swimming in a new wave of economic transformation this century.

A case in point is the plight of farmers in Nyamilu village in Uriri subcounty whose low living standards highlights the diminishing returns in the subsector.

The caving in walls of houses in the village symbolise of the economic woes of farmers. The population, linking a drowning swimmer would on a straw, clings on the cane growing in the hope of a turnaround.

“Farmers are unhappy with the sharp decline in prices of cane delivered to factories operating in the region even as cane demands in the market continue to rise ten-fold in the recent years,” says Paul Otieno, an economist based in Migori town.

Sony, the largest sugar miller in Nyanza, has in the past years pricked the nerves of farmers with unilateral decisions to reduce cane prices from $43 (Ksh4,500), the highest cane prices ever paid by local millers to $30.5 (Ksh3,200) per tonne.

The other millers – the Ndhiwa-based Sukari Industries Company in neighbouring Homa-Bay county and Trans Mara sugar Company in Trans-Mara sub-county began operations in 2011. They have not elicited a lot of interest among farmers either with their prices that are not commensurate with the cost of inputs.

The Kenya National Sugarcane Farmers Union has dismissed prices new cane prices as illegal even as leaked documents indicated that the millers were planning a further price cut on the crop.

For years, KENSGU has protested the low prices and illegal deductions imposed on farmers’ produce, saying they were meant to fleece them of their hard-earned money against the prices entrenched in the Kenya sugar Act.

Peter Nyamori KENGU branch chair, says that while expectations are high to make cane farming a lucrative activity, the fear is that millers have turned it into a cash-cow to the detriment of the farmers’ development.

Farmers in the region now warn they might be forced to stop growing the crop.

A visitor to this region would marvel at the lush, green patches of well-tendered cane that stand out against a backdrop of weathered maize fields, a pointer to poverty-ravaged villages

To economists, the current status of cane farmers goes against the region’s potential. They corruption and reckless spending for the plight of cane farmers.

“Whereas the millers stand accused for offering cane producers peanuts in terms of prices, farmers on the other hand are themselves enemies of their own pockets for failing to spend their income wisely,” says Elias Owino, an economics student at Maseno University.

“The local sugar millers must admit that growing cane is expensive, especially the cost of inputs like fertilisers, pesticides and seeds, and so it can only make sense if the crop fetches a good price,” Mr Owino said in an interview.

However, a senior manager at Sony recently told a farmers’ meeting called to resolve impasse on prices that what the company was paying farmers for a tonne of their produce was actually modest and they should stop complaining of being exploited.

“You should be aware that the prices are dictated by prices of sugar in the world market,” said Bernard Otieno, the acting general manager.

But what affects both millers and farmers is poor seed cane as a result of cane development. The other factors are the cost of farm inputs, cane poaching between factories-all that cause serious cane shortages and, illegal sugar importation, poor management of the milling plants because of corruption and lack of clear policy guidelines by government.

To guard against cane shortages in future, Sony management in collaboration with research agencies in the county have now come up with sugarcane varieties that matures faster and gives higher yields.

The new varieties, the company explains, would automatically cut production costs in terms of energy and money invested in the crop’s tendering from the first to last day on the farms.

Some of the varieties mature in 12 months, cutting the harvesting period by half. Some varieties will double farmers’ earnings compared with the varieties planted at present.

The company has also embarked on a programme to grow its own raw material instead of relying on contracted farmers. It is intended to reduce conflicts with farmers and stabilise process of raw material, often impacted by cane poaching.