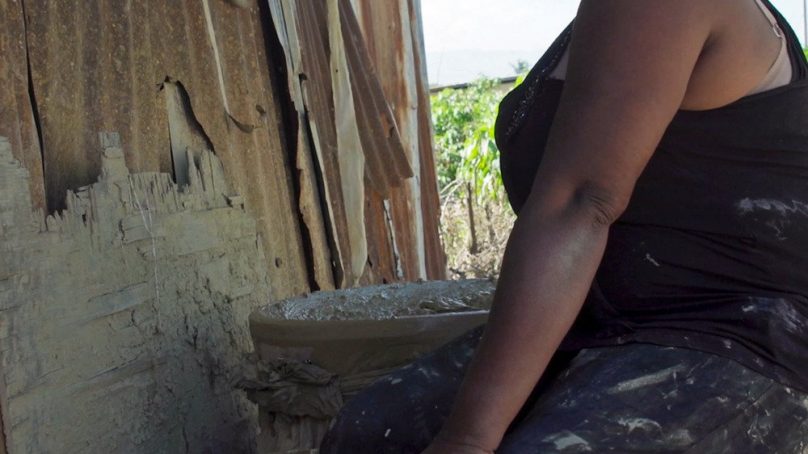 Yet even before the 2010 earthquake, farmers in Haiti had “no financial back-up, no technology, no education”, says Fritz Alphonse Jean, president of the Haitian Public Policy Institute (INHOPP) and a former governor of the Haitian Central Bank (BRH).

“If you look at the credit allocated to the agricultural sector today, it is less than two per cent. The sector was completely neglected throughout Haitian economic history.”

The international aid dynamics have also complicated the situation. Agencies such as the World Food Programme provide crucial assistance for those in the midst of crisis.

Although WFP says it has started to buy more food from local producers, the majority is still bought outside of Haiti because local production can’t satisfy the needs.

Back in October 2010, Oxfam International released a report criticising how foreign food aid was continuing to undercut local agriculture, and calling on donors to help develop the sector instead. Yet things seem to have changed very little more than a decade later.

It was “really frustrating to see a lot of food being brought into the south” after the August earthquake, said Miles of the Haiti Response Coalition. “We had organisers, mobilisers on the ground who live in the communities, and they were saying, ‘Look, you can buy food on the market. You don’t need to send food to a place that has food on the market’.”

Climate change is also accelerating the need for urgent reforms to Haiti’s food production system, even as shortages become more acute due to the rising insecurity.  Haiti sits in the middle of the hurricane belt. It is also in a seismically active zone, making it even more vulnerable to natural disasters.

Deforestation has amplified this vulnerability – clearcutting that began centuries ago to make way for colonial sugar plantations has effectively crippled agricultural production and ramped up flooding and landslide risks.

Climate change is also expected to bring even more frequent and intense droughts, floods and storms. And with each storm comes the salinisation of coastal aquifers. Without the right tools given to Haiti’s agricultural sector – 60 per cent of rural Haitians depend on the sector for jobs and income – lower crop yields are likely, along with more hunger and malnutrition.

In last year’s Global Climate Risk Index, Haiti was one of the most vulnerable countries to weather-related losses between 2000 and 2019, both in terms of lives and economy.

Bazelais Dulience, dean at the State University of Haiti’s Henry Christophe campus in the northern town of Limonade, is particularly worried given the lack of irrigation in Haiti.

“In the future… we will have to buy more food from abroad with the little money we do have, which will result in greater poverty, triggering a vicious cycle,” Dulience said.

But for Marie Bellange Alfred, a 63-year-old farmer who has been impacted by both the August earthquake and erratic rainfall in the southern town of Camp-Perrin, the future is already here.

She currently relies on food from aid agencies and humanitarian organisations.

“It hasn’t rained for us to plant crops,” Alfred said. “Plus, we don’t have irrigation… our only hope is the rain.”

According to the World Bank, less than five percent of Haitian farmers had irrigation in 2013. Little has changed since then. Prime Minister Ariel Henry has promised elections this year, but no date has been set.

A coalition of Haitian lawmakers and civil society groups has proposed that a two-year transitional government be installed to provide greater stability. Instead, Henry wants to set up a provisional electoral council so that elections can be held. On Monday, Jean, the former central bank governor, was chosen by the opposition as Haiti’s interim president in a move not recognised by Henry, officially the acting president.

It could also go a long way towards breaking the stranglehold of powerful elites on the food market: A 2016 World Bank study found that just two companies dominated the Haitian market for palm oil, as well as other vegetable and animal oils.

Fourteen local businesses have set up the Haiti Local Food Systems Alliance to improve productivity and the incomes of tens of thousands of farmers. Acceso – a social enterprise business working in Haiti, Colombia, and El Salvador – is one of the members.

After the August 2021 earthquake, Acceso sourced and supplied local fruit, vegetables and grains to people impacted by the disaster. It is also working to produce more locally sourced food kits for affected communities.

“One of the problems [with donors’ support of Haitian agriculture] is that there are few market-linked solutions ready to invest in or fund philanthropically, and the hard work of building out new food supply chains still needs to happen,” Acceso CEO James Jenkin said.

Paolo Silveri – country director for the International Fund for Agricultural Development (IFAD), which is helping farmers in southern Haiti to develop climate-smart solutions – said the five key ingredients for the country to turn itself around are security, stability, investments, capacity-building, and jobs.

“All that creates and multiplies reasonable chances for most people to make a decent living at home. Out-migration of young Haitians is a wound that keeps bleeding and nails the country to its current dire conditions,” he said.

More than 1.7 million Haitians have migrated since the 2010 earthquake. Thousands have also left in recent years due to the escalating gang violence.

Despite the obvious challenges, Annesteus remains optimistic about Haiti’s future. She points to the experiences of her own family as proof.

Ironically, her parents sent her to school so she wouldn’t have to become a farmer. Scholarships took her to Venezuela and the United States to study, but she returned to Haiti to help.

Although land ownership continues to be an obstacle, her parents still farm, and now – after years of saving – they own a small plot of land.

One of her brothers, meanwhile, studied law, but has since started studying agronomy.

“The hope is that people like me, my sister, and many others that experienced hardship growing up are coming together to support the community,” Annesteus said. “And I am optimistic…”

35 years after nuclear leak, some animal and plant species in Russia seem to be faring well after adapting to the radiation