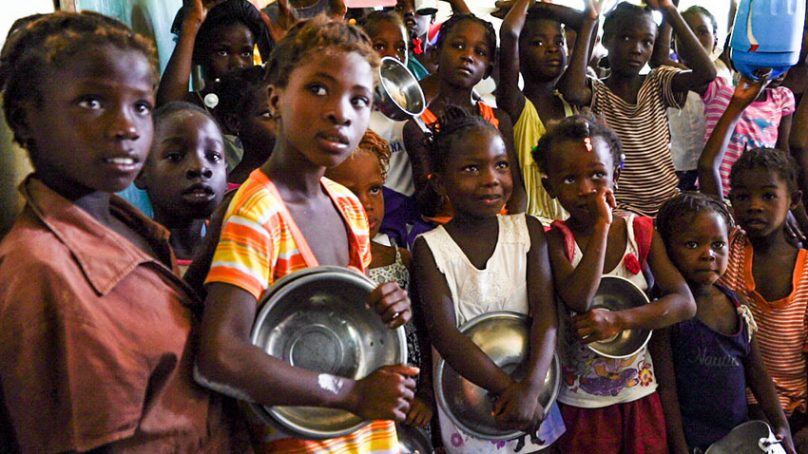 Hunger was never far away when Angeline Annesteus was growing up. The daughter of subsistence farmers in Bercy, southern Haiti, she remembers going for days without much food.

That was more than 30 years ago. Food insecurity is even more pressing now. Around 4.3 million people, more than one in three Haitians, currently need urgent food assistance – a still-worsening situation stoked by years of political instability, natural disasters, government neglect and trade policies that undermine agricultural production.

“The socio-economic conditions have not improved, but deteriorated,” said Annesteus, who is now the country director for ActionAid, an international NGO that is helping Haitian women learn how to grow and sell food, purchase land, and mitigate the effects of climate change.

One of Haiti’s main food-producing regions, the southern Tiburon Peninsula where Annesteus grew up has been battered by a string of recent disasters. First came Hurricane Matthew in October 2016, when more than $500 million of damage was done to Haiti’s agricultural sector.

Then, on August 14, 2021, a 7.2-magnitude earthquake killed 2,200 people, injured 12,000 more and ruined roads, key infrastructure and thousands of homes. It was followed two days later by Tropical Storm Grace.

As well as wiping out crops and damaging irrigation systems, the earthquakes and storms destroyed markets, storage facilities and food processing plants – hits the agricultural sector could ill afford, especially as much of the maize production comes from the verdant south.

Compounding the hardship are gang violence – which has escalated in and around the capital, Port-au-Prince, since President Jovenel Moïse’s July assassination – and hyperinflation that has put even the most basic produce out of reach for many: The Caribbean country was recently ranked in the world’s worst 10 hunger crises.

Experts say security must improve for Haiti’s immediate food needs to be met: The risk of kidnap and violence has disrupted some aid operations. But according to more than a dozen analysts, economists, aid worker and farmers interviewed by The New Humanitarian, fixing Haiti’s broken food system in the longer term will require better governance, policies that don’t undermine local food production and sustained support from donors.

“The donor community, and all [of] these humanitarian and development actors have a huge role to play [to address hunger in Haiti],” Melinda Miles, who co-founded the Haiti Response Coalition in the aftermath of the 2010 earthquake that killed between 100,000 and 300,000 Haitians, said. “They need to fund Haitian solutions, and Haitian solutions will be climate-smart, like traditional agriculture.”

Haitian farmers had historically planted a variety of crops that could sustain them if one crop failed, but that changed during the US occupation in the early 20th century when the focus switched to funding large plantations of maize, sugarcane and other crops, Miles explained.

Even when there is produce now – domestic production of staple crops has been in decline since 2018 due to unrest, lack of investment, and climate-driven changes – it is difficult to get it to customers. “Gangs control all the major roads connecting Port-au-Prince to the countryside and [small farmers] cannot access the market to sell the products,” said Annesteus, who lost her 12-year-old cousin in the August earthquake.

A national strategy for food sovereignty, security and nutrition was developed and approved last year by Moïse’s government, but given the instability it’s unclear when – or if – the new policy will be implemented.

In the capital, a bag of rice weighing roughly 2.7 kilogrammes has doubled in price to 500 gourdes ($5) in the last few years, while a pack of pasta has nearly doubled to 55 gourdes, said Adeline Chéry, a 56-year-old who works as a cook in a private home.

Things are worse in the southern peninsula, which was most affected by the August earthquake. In Jérémie, nearly 200 kilometres west of Port-au-Prince, a 12.5-kilogramme sack of rice costs 3,600 gourdes ($35), said hair braider Roselène Milfor, 36. “Even when I’m able to make 500 gourdes ($5), you can’t make it last,” she said by phone.

When there’s no food, some Haitians consume dirt cakes – discs made of mud, salt and vegetable shortening that contain trace amounts of fat and minerals. The cakes, also known as “galettes”, are sometimes given to pregnant women and children for indigestion. ​

When Haiti became the world’s first Black republic in 1804, it paid a heavy price. France imposed a hefty indemnity charge to pay for property – and slaves – it lost.

The debt, worth around $21 billion today, saddled the country with hefty payments – money that could have been spent on building roads, irrigation systems and other infrastructure projects that would have supported the agricultural sector in the long term. It took Haiti more than a century to pay off the debt.

With a variety of staple crops, the Caribbean nation was largely food self-sufficient until the mid-1980s. Then, under pressure from the United States and international organisations, it agreed to liberalise trade and slashed import tariffs from 50 to 3 per cent, compared to the regional average of 38 per cent.

This opened the floodgates to highly subsidised rice from US farmers, and did so with no accompanying policies to shield local food producers, who were unable to compete with lower-priced imports.

“These decisions put Haitian farmers out of business,” explained Annesteus, who was born in 1983 and witnessed the effects of the policies on her parents. “You see your family out there trying to work the land every day, but in the end, they don’t make anything significant out of it.”

“Gangs control all the major roads connecting Port-au-Prince to the countryside, and small farmers cannot access the market to sell the products.”

Trade liberalisation also decimated the traditional Haitian poultry industry, replacing local free-range chickens that took four months to mature with US chickens that could grow to maturity in about a month due to industrial farming practices.

Once called the “Pearl of the Antilles” and known for regularly exporting sugar, coffee and bitter oranges that flavour Grand Marnier, Haiti now relies heavily on food imports.

Today, 80 per cent of rice, all cooking oil and nearly half of all the food consumed in Haiti is imported, according to the US-funded famine monitor FEWS NET.

In March 2010, two months after the catastrophic earthquake, Bill Clinton – who was US president when some of the trade liberalisation agreements went into effect – apologised for having championed policies that harmed the country’s farming sector.