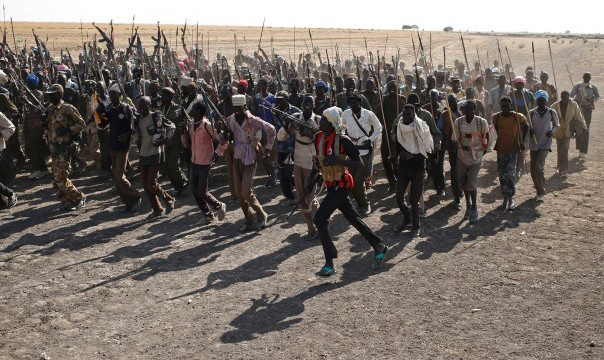 Loans from the International Monetary Fund over the last two years have helped stave off a total collapse of the government of South Sudan, but the state has nevertheless almost entirely withdrawn from the provision of services and wages for regional authorities.

In Warrap, the government is conspicuous by its absence. It offers no security to its citizens, despite being the home state of President Salva Kiir and a roll call of South Sudan People’s Defence Force (SSPDF) generals.

Soldiers in the state, who haven’t been paid for months, have sold their weapons to the gelweng, which, after decades of military backing, now rival the state for power in some areas.

In Thiet, a small town in Warrap, local gelweng said their jobs have changed over the years: While they once primarily looked after livestock, in the absence of state protection, they now consider themselves community defenders, responsible for protecting people against raids that frequently don’t just seek to acquire cattle, but target homes, resources, and women and children.

Violence and political power have long had an intimate relationship in southern Sudan, where rebels fought a 22-year struggle against Sudanese government forces and allied militias before signing the 2005 Comprehensive Peace Agreement (CPA).

During the post-CPA period, Kiir bought off the Nuer militias of military leader Paulino Matiep Nhial – previously backed by Khartoum, which he feared could disrupt a 2011 referendum on secession from the north. He offered militia members ranks and wages within the South Sudanese army.

The integration of Matiep’s militias into the security forces ushered in a period in which commanders would frequently rebel and leverage violence for better ranks or political positions in the capital.

During the recent civil war, both the forces of the government and Machar’s opposition SPLA-IO group were composed of fractious coalitions of political and military leaders, often more intent on controlling local resources than on pursuing a national agenda.

Frequent rebellions were once again the order of the day.

The 2018 peace agreement does not appear to have changed this basic logic of violence. Just as during the period following the signing of the Comprehensive Peace Agreement (CPA), violence has become the currency in which political power is traded.

The peace agreement has caused other problems too. Prior to the accord, local state and county posts were decided by state governors. But now, all such positions are decided by belligerent parties in Juba according to a power-sharing calculus.

“The power-sharing logic of the peace agreement has meant the appointment of commissioners whose roles are to repress local populations rather than represent them.”

In Warrap – which was loyal to the government during the war – this arrangement has led lifelong members of the SPLM, the ruling party, to join an opposition with which they have no real connection, just so they can qualify for places in the government.

Chosen by the SPLA-IO leadership in Juba, these candidates often have no real connection to local communities in Warrap, where residents say it is the gelweng who call the shots.

“The [SPLA-IO] commissioner in Tonj East [an administrative area in Warrap] is not popular,” explained one young Luanyjang man displaced to Tonj South by insecurity. “He doesn’t have any power.”

Mabor was eventually replaced by someone more palatable. However, elsewhere, the power-sharing logic of the peace agreement has meant the appointment of commissioners whose roles are to repress local populations rather than represent them.

These appointments have led to clashes, and a growing antagonism between the political elite and the South Sudanese population.

Community disarmament has also become a motor for violence. Ideally, such campaigns would see weapons removed from all communities involved in conflicts, but in reality, political elites use them to target communities associated with their rivals.

An operation in Warrap by Rin Tueny Mabor (also known as Janafil), a former military intelligence chief and the current governor of Lakes state, provides a cautionary tale.

Carried out in late 2020, the operation targeted members of the Luanyjang group believed to have been supported and armed by Akol Koor Kuc, the director of the National Security Service (NSS) and one of the most powerful politicians in the country.

“How can you disarm only the Luanyjang? It would leave us vulnerable to attack from all the surrounding communities.”

Janafil and Akol Koor are rivals who contest the favours of Kiir and have rumoured ambitions to rule South Sudan. For Janafil, disarming the Luanyjang would have indicated Akol Koor’s weakness in the NSS chief’s home state of Warrap.

For the Luanyjang community, however, the campaign would have had devastating consequences. “How can you disarm only the Luanyjang? It would leave us vulnerable to attack from all the surrounding communities,” said Daniel Mayoor, the representative in Tonj South for those displaced from Tonj East, the homeland of the Luanyjang.

In August 2020, tensions between soldiers tasked with carrying out the disarmament and the Luanyjang gelweng turned violent, leading to the deaths of at least 148 people. The army emphatically lost the battle, and the disarmament campaign was suspended.

The army’s humiliation underlines the weakness of the state in comparison to the gelweng. And it also shows that, while the UN may call for government interventions to prevent local violence, it is the state that is often the cause of the problem.