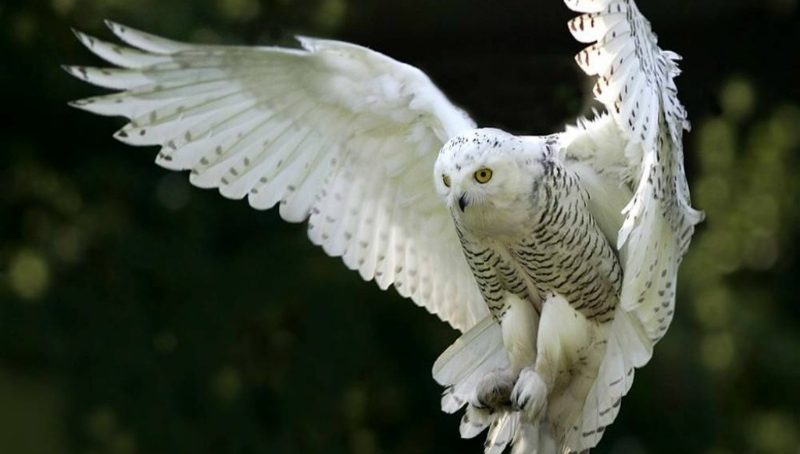 Every owl fancier has a story of the first time they heard an owl – or, rather, did not hear one. It is unforgettable to see an enormous bird, whose wingspan can reach more than six feet, slipping through the air without even a whisper.

“They trained the owls to fly very close to the audience,” he says. “My first experience was of ducking to avoid a collision. I heard only a very slight swoosh after it passed.”

Laboratory measurements have shown that the slight swoosh made by a barn owl is below the threshold of human hearing until the owl is about three feet away – a feat of stealth that biologists and engineers are far from completely understanding.

But researchers from both disciplines are working to solve the riddle of silent flight – some with the aim of designing quieter fans, turbine blades and airplane wings.

Such owl-inspired innovations can reduce noise by as much as 10 decibels, similar to the difference in noise between a passing truck and a passing car, Jaworski and Nigel Peake write in an overview in the 2020 Annual Review of Fluid Mechanics.

Jaworski, an engineer at Lehigh University in Pennsylvania, is hardly the first scientist to be captivated by the puzzle of silent owl flight. In 1934, Robert Rule Graham – a British pilot and bird connoisseur – called attention to three structures on owl wings that might account for the owls’ silence.

More than 80 years later, his “three traits paradigm,” as Christopher Clark calls it, is still cited in many papers on owl wings. “He clearly knew birds very well and he was an aeronautical engineer,” says Clark, an ornithologist at the University of California, Riverside. “Science was different in the 1930s. In our age of specialisation, you don’t get that combination.”

First, Graham pointed out an unusual structure called the “comb,” which literally looks like a comb projecting forward from the wing’s leading edge. Second, he noted that most of the owl wing is covered with a soft layer of velvety feathers. Finally, he observed that the feathers on the trailing edge of the wing form a ragged fringe.

Most researchers still agree that the comb, the velvet and the fringe combine in some way to reduce noise, but the owl may have more tricks up its sleeve. “When all is said and done, I think we’ll have a number of mechanisms, including Graham’s,” says Clark.

To explain how an owl suppresses noise, it would help to identify where the noise comes from in the first place. For an airplane coming in for a landing, a large part of the noise comes not from the engines but from the flow of air around the plane, especially the sound produced at the trailing edge of the wings. The turbulent air rushing past the exposed edges of the wings translates to the dull roar you hear as the plane flies overhead.

A bar graph plotting sound pressure and distance shows humans cannot hear the low-frequency sound produced by a gliding owl, no matter the distance, while mid-range and high-frequency sounds become audible when the owl is close by.

Low-frequency sounds made by owl flight are inaudible, no matter the distance. Humans can hear flight noise in the mid-range frequencies when the owl is between one and three meters away. Owl wings and feathers are especially good at dampening higher-frequency sounds, which can be heard only if a person is standing within a meter of the noise.

One way to reduce this noise would be to make the trailing edge of the wing less hard, more porous and more flexible. This may be the function of the owl wing’s ragged fringes. Jaworski and Peake have mathematically calculated how engineers might use such porosity and elasticity to reduce noise, and how to quantify that diminished din.

Those calculations are supported by wind-tunnel experiments: A variety of porous materials do dial down the noise. Work by Thomas Geyer at Brandenburg University of Technology in Germany has found that a poroelastic wing the size of an owl’s can be about two to five decibels quieter than a regular wing.

However, says Geyer, the right porous material is crucial; in the wind-tunnel tests, some materials actually increased high-frequency noise. Measurements of owls in flight show that their wings mute only frequencies higher than 1,600 hertz (on a piano, two-and-a-half octaves above middle C).

Since this is roughly where the range of rodent hearing begins, it is the range that an owl would benefit most from suppressing as it hunts for a meal.

Jaworski and Ian Clark (no relation to Christopher) of NASA’s Langley Research Center have attempted to mimic the owl’s velvet by covering a standard airfoil with various kinds of fabric.

“The winning textile was a wedding veil,” says Jaworski. However, it may not be necessary to donate your nuptial accessories to science because the researchers got even better results by attaching tiny plastic 3D-printed “finlets” to the blades of a wind turbine.

Scientist: It will be a while before engineers identify source of noise in owl aviation