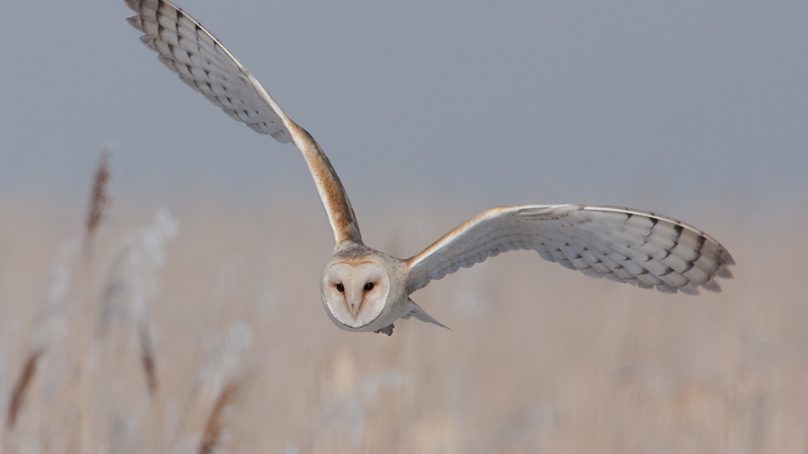 Scientist: It will be a while before engineers identify source of noise in owl aviation

Forget about the superstition about bad omens associated owls. Science is gradually changing the perception and now beyond the ugly looks of owls, the birds are attracting the interest of researchers keen on identifying the most important source of noise in owl aviation.

Research suggests that owl wings have three features that contribute to their silent flight: a “comb” structure (just visible at the wing’s top right), ragged trailing edges (visible along the bottom of the wing) and a velvety material that covers much of the upper left of the wing. The comb structure from a different specimen is shown close-up at bottom.

“Over a certain frequency range, we saw a 10-decibel noise reduction,” Justin Jaworski, an engineer at Lehigh University in Pennsylvania, says.

“That may not sound like much, but in air acoustics, engineers fight over two or three decibels. Ten decibels is half as noisy. That is a massive change for any technology.”

Siemens, a manufacturer of wind turbines, has apparently been listening and recently unveiled its second-generation “Dino Tail” turbines that have combs directly inspired by the owl wing.

Though owl wings are providing new insights into noise reduction for aeronautical engineering, engineers have had less success describing the physics of owl flight.

According to Christopher Clark, an ornithologist at the University of California, Riverside, engineers may not even have identified the most important source of noise in owl aviation.

If you’re trying to build an owl, rather than a wind turbine or an airplane, you’ll notice several differences. Owls have feathers; airplanes don’t. Owls flap their wings; airplanes don’t. There’s a good reason that aeronautical engineers prefer stationary, solid wings to flapping, feathery ones. They are easier to understand.

But if you are a biologist, to ignore flapping is to ignore a fundamental ingredient in avian flight, says Clark. As bird wings flap, they change shape and as they change shape the feathers rub against each other, causing noise. This noise is frictional, not aerodynamic, produced by the contact of solid against solid.

In Clark’s view, the purpose of the owl’s velvet and the fringes is to reduce frictional noise between the feathers while flapping. Clark concedes that his argument would be moot if owls glided while hunting, but video evidence shows they do not: They flap when taking off, they flap when landing and they even flap when “coursing” for prey.

An animated gif of a generic owl-shaped figure flapping with small blue and red dots swirling behind the wings.

Scientists seeking to understand why the owl’s flight differs from other birds have studied the turbulence patterns left in their wake. Here, vortices swirl behind a computer-animated great horned owl, created by Roi Gurka and Elias Balaras using data gathered from wind tunnel experiments.

Red and blue indicate vortices spinning in opposite directions. Compared with other birds such as sandpipers and European starlings, the owl’s vortices are small and disorganised, and do not trail very far behind the owl. The mechanism by which the owl suppresses these vortices is not yet understood.

And the fringes are not only on the trailing edge of the wing, where the aerodynamic theory would predict them to have the greatest noise-reducing benefit. Fringes also exist on the leading edges of the feathers, where they do not affect aerodynamic noise, as well on some feathers that are not even exposed to the airflow. This suggests that their purpose is not aerodynamic.

Clark says that we may be asking the question backward. Instead of asking why owls are so quiet, we should ask why other birds are so loud. The answer is feathers. “Feathers are amazing structures and probably the reason birds are so successful,” Clark says.

But they come with an evolutionary cost: “If you’re going to build a wing out of feathers, they are going to produce frictional sound.” To become silent hunters, owls evolved special adaptations that reduce this disadvantage.

Owls are not the only kind of bird that has solved this problem. Some species of Australian frogmouths have independently developed the same adaptations. These birds are also carnivorous and have wings that are soft and fluffy with combs and ragged fringes.

In Graham’s day, people assumed that frogmouths were closely related to owls, but genomic analysis has proved that they are not. While less studied than owls, they too are silent flyers.

“Evolution often takes a quirky path,” Clark says. “One way you can home in on the underlying mechanical principles and tell them apart from quirks, is with convergent evolution.” When two unrelated animals have the same adaptation, it suggests that the feature confers a benefit – in this case, stealth.

At present, there are two ways to understand owl flight: an engineering view informed by the equations of fluid motion and wind-tunnel experiments, and a biological view based on anatomy, behaviour and genomics. A truly integrated story will probably require both.

Even engineers realise that idealised studies based on rigid, unfeathered wings are not enough. It’s quite possible that the owl uses its feathers and small shape adjustments of the wing actively, rather than passively, to manipulate airflow.

Engineers aren’t even close to understanding this process, which spans several size scales, from the barbs of the feathers to the individual feathers, to the entire wing.

“What is missing to us is the microscopic point of view,” says Roi Gurka of Coastal Carolina University in South Carolina, whose experiments with flying owls have led to beautiful computer simulations of the flow field around a flapping owl wing.

“I understand the wing,” he says, but understanding the role individual feather morphology plays in noise reduction is another matter.

While the scientists debate, the barn owl will continue flying as it always has: its face as round and imperturbable as the moon, its ears trained on its next meal and its feathers treading gently on the air.