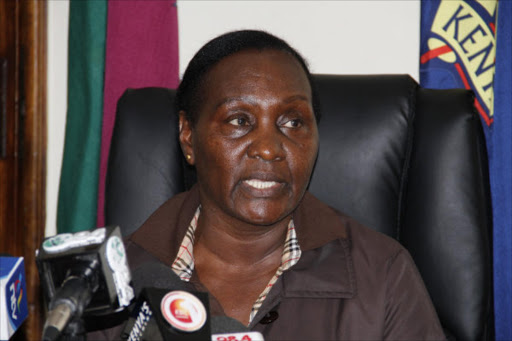 An insidious competition for tenders in the National Police Service is rocking the institution that bears the responsibility of protecting the public and property, which threatens to sink the country further into the abyss of lawlessness.

These guys were after me and my seat. If you want details talk to Kavuludi after which you can crosscheck with me.

It turned out that President Uhuru Kenyatta may have been unwittingly sucked into a scramble for lucrative tenders in the of Internal Security after he chaired a meeting at State House Mombasa that sealed her fate of former Deputy Inspector General of Police Grace Kaindi, who was replaced by Mr Joel Mboya Kitili.

Four years after Kaindi was forced to quit office, Tell can authoritatively reveal how she was inadvertently caught up in the tussle for questionable tender for the procurement of police medical insurance, police vehicles and paramilitary equipment as Kenya looked to firm up the war against Al Shabaab terrorist insurgency in north-eastern Kenya and armed crime elsewhere in the country.

Highly-placed sources at Vigilance House – the police headquarters – say Ms Kaindi found herself in the throes of multibillion tendering between her seniors – then Cabinet Secretary for Internal Security Joseph Nkaissery and then Inspector General of Police Joseph Kipchirchir Boinett, who preferred the suppliers were single-sourced.

Kaindi is said to have been opposed to ‘inferior’ Chinese equipment arguing terrorists use more superior and sophisticated weapons and equipment to fight Kenyan security forces.

Following her controversial departure, the government acquired 2,720 vehicles that included 25 Bigfoot (MRAPs) to supplement 3,155 police vehicles (most functionally non-serviceable), according to President Uhuru Kenyatta when commissioned the last batch of 525 vehicles at Uhuru Park on January 16, 2017.

Without delving into the details, Ms Kaindi confirmed there were serious questions of integrity in the National Police Service tenders for equipment and medical insurance following the amalgamation of the Kenya Police and the Administration police.

“It is true there were intrigues. There were people who wanted me out of office before the end of my contract. I was perceived as a stumbling block and I went to court. The court granted me my rights and I am happy wherever I am. The people who wanted me out of office should be the one to respond questions about what is happening now,” Ms Kaindi responded as she fended off questions about how the government acquired death-traps for the police.

Ms Kaindi also stayed clear of the performance of a Mr Makori, who had the backing of former chairman of the National Police Service Commission Johnston Kavuludi, to remain at the commission because his integrity. Makori, according to sources, left before Kaindi.

The plot to get rid of Kaindi was hatched after she refused to approve the transfer of Mr Makori back to the Public Service Commission, where the police service was domiciled before the formation of the NPSC, following the promulgation of the 2010 Constitution that provided for far-reaching police reforms.

At the centre of the standoff were the acquisition of armoured personnel carriers (APCs) and MRAPs (Mine-Resistant Ambush Protected Vehicle) vehicle (MRAPs), with Kaindi reportedly preferring European or American made vehicles while Nkaissery and Boinett rooted for Chinese made vehicles.

Kaindi reportedly received the backing of Kavuludi, who argued that the new commission needed experience to steady it. Reached for comment, Mr Kavuludi said he was aware of the succession dogfight at the highest echelons of the police service but declined to comment on the standoff between the Kaindi and her bosses over tenders.

Our source said, “Kaindi refused to approve the transfer and the chairman of NPSC said he had no powers to effect to the transfer. Eventually Makori was forced out of office. Forcing out Makori paved the way for getting rid of Kaindi, which in turn would clear the way for the controversial acquisition of the APCs and MRAPs.”

MRAP, EM-rap (or Mine-Resistant Ambush Protected) is a term for United States military light tactical vehicles that are designed specifically to withstand improvised explosive devices (IEDs) attacks and ambushes, according to the United States Department of Defence. The mine resistant vehicles codenamed CS/VP3 model or Bigfoot are designed to provide secured transportation for combat personnel and materials.

Since then, other countries have been adopted MRAPs as vehicles of choice to repulse threats posed by guerrillas and terrorist groups such as Al Qaeda and Al Shabaab.

Other than IEDs, the other methods of attack include suicide vests, grenades, knife attacks, shootings and bombings, including car bombings, according to data compiled Kenya’s ministry of defence and US Department of Defence.

After Kenya military tanks rolled into Somalia in 2011, restricting Al Shabaab militants to intra-Somalia attacks,  the country found itself deeper in the web of terrorism that is estimated to-date to have claimed more than 800 lives since, with the police estimating over 100 security officers have been killed by Al Shabaab-mounted IEDs, while hundreds more have been critically injured.

Our sources argue that the death toll in the police service could have been avoided had the procurement of the MRAPs had been above-board.

The PS was then asked to clarify concerns about how the APCs were acquired from China, the number and the cost. There were also questions about their reliability and durability (resistance), why most of the vehicles are in disuse and what the government is doing to ensure the police are equipped to repulse any national security threat.

We sought also to know if the ministry was aware of the intrigues behind Ms Kaindi’s ‘forced’ retirement in addition to information on the police medical insurance.

Questions remain how president Uhuru Kenyatta was unwittingly dragged into the scramble the for tender as the scheme to dislodge Kaindi before her contract ran out heated up. When she declined a diplomatic appointment and moved to court to challenge her un-procedural dismissal, the former DIGP was forced to attend a meeting at State House Mombasa.

While she agrees having been dragged to the meeting at State House, she declined to delve into the details of the meeting chaired by President Kenyatta, especially if the president was aware that he had been used a pawn in a slug-out for lucrative government tenders that have serious ramifications on the country’s security.

“All you are saying is very true. These guys were after me and my seat. If you want details talk to Kavuludi after which you can crosscheck with me. I went to court and the court listened to me. The intrigues are still even after I left. I want to live in peace,” says Kaindi.

Kavuludi had earlier said, “My six years at NPSC were full of drama. There people who never wanted to see me or see the police service undergo reforms. I want to leave in peace. It was too much.” He was responding to questions about the intrigues that pushed Kaindi and Makori out office and how the president was sucked into the tussle for the police tenders.