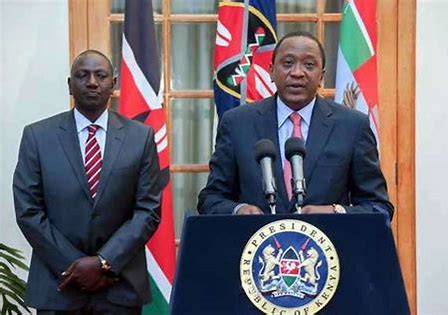 Kenya’s Deputy President William Ruto had a falling out with President Uhuru Kenyatta in 2018, ending a decade-old partnership dubbed “Uhuruto.”

Ruto presents himself as an “insurgent candidate,” deriding the Odinga ticket as a continuation of the dynastic politics of the Odinga and Kenyatta families that have loomed large over Kenya since independence.

Jaramogi Oginga Odinga (Raila’s father) and Jomo Kenyatta (Uhuru’s father) were comrades who led Kenya to independence in 1963 and were considered co-founding fathers until they fell out in the mid-1970s over Jaramogi’s demand for multiparty politics.

Ruto has framed his election around the slogan of Hustler Nation (low social and economic class) and has depicted the elections as a struggle between “hustlers” and “dynasties.”

William Ruto’s Kenya Kwanza alliance (“Kenya First”) assembles nine parties that have also undergone multiple transformations since the Moi era. Some of them – like Ruto himself – were either on Odinga’s side or with Kenyatta in previous elections.

It, too, promises an extensive and populist social welfare programme targeted particularly at the youth. Key pledges include a so-called “hustler fund” for women’s cooperatives and Kenyan women abroad, workers’ compensation, universal healthcare and Pesa kwa Vijana (Youth Economic Empowerment), a programme that targets “wealthy dynasties” for wealth and land redistribution. Ruto has also pledged to enact a policy requiring spousal consent in all land transactions to protect women and children from dispossession of family land.

It is notable that both tickets recycle elites who have dominated the Kenyan scene since the Daniel arap Moi era but under different banners. This serves to perpetuate the personalisation of politics. Namely, parties have tended to be organised as vehicles for winning votes rather than offering alternative policies.

Indeed, the two frontrunners – Odinga and Ruto – have traded accusations throughout the campaign, not on policy positions, but about their personal stories and having an unfair advantage due to their access to state machinery.

Kenyan political parties have tended to be organised as vehicles for winning votes rather than offering alternative policies.

These populist platforms are clearly targeting young people as a key constituency that is up for grabs. Kenya’s unemployment rate among the 18-to-34 age group is nearly 40 per cent and the economy cannot absorb the 800,000 youth joining the workforce annually.

This is a restive cohort as can be seen in some of the placards at rallies that include slogans such as: “The youths are suffering,” “I lost my job,” “Vitu ni different kwa ground” (“things are different on the ground”), and “I need a job.”

Such unmet expectations make this segment of society susceptible to being mobilised for violence.

Meanwhile, many other youths, typically the segment of the population that champions reforms, are apathetic – seeing little difference between the candidates and parties.

The IEBC had set a goal of registering six million new voters given the growing youth cohort. Instead, it ­­ ended up only registering 2.5 million. Some of this lack of enthusiasm is a result of targeted disinformation, fostering confusion and disillusionment.

Kenya’s 2010 Constitution abolished what Kenyans have long described as an all-powerful “imperial presidency,” and redirected national politics down to the grassroots. A new government structure was adopted consisting of 47 counties, each with an executive authority and an independent legislative branch to debate and pass legislation.

Mechanisms were put in place to facilitate public inputs in a bottom-up process. As a result, Kenyan politics have become more county-based and politicians must create alliances at the municipal, village and town levels.

As one indication of this new mode of politics, Odinga and Ruto chose Kikuyu running mates, and have included Kikuyus up and down their tickets. Mt Kenya Province, where Kikuyus dominate, is the most populous constituency in Kenya, accounting for more than 17 per cent of the vote.

In Odinga’s case, the choice of running mate is also a woman. Martha Karua, a High Court advocate and veteran of the struggle for multiparty democracy, is widely called the Iron Lady. She is the first woman to join a major party ticket in Kenya’s history. The Odinga camp is banking on her appeal to women, her anti-corruption credentials, her endorsement from Mt Kenya Elders and national recognition for her struggle against one-party rule.

Ruto’s running mate, Rigathi Gachachua, is the first politician in Kenya’s electoral history to openly identify himself as a “child of Mau Mau” – the guerillas who fought the British colonialists and whose struggle was centred in Mt Kenya region.

Gachachua’s parents serviced the guerillas’ weapons and provided them food and ammunition. By creating this aura around him, the Ruto side is trying to make a clever play on a highly emotive issue in Kenya’s political discourse. That is, despite the legendary status of the Mau Mau in Kenyan memories, there is a widespread perception that those who took over from the British distanced themselves from the Mau Mau and left them destitute.

Kenyan observers say that the selection of Kikuyu running mates sends a powerful message that Kikuyu, Luo, and Kalenjin elites can work together and presents an opportunity to move past ethnic-based politics

Both Odinga and Ruto have spent most of their campaigns outside their home turfs as they attempt to build on their strongholds. Odinga is dominant in 20 counties divided among his home Nyanza region, and the coast, western, northern and Nairobi regions.

Some Kenyan observers say that the selection of Kikuyu running mates sends a powerful message that Kikuyu, Luo and Kalenjin elites can work together and presents an opportunity to move past ethnic-based politics.

This contrasts sharply with previous elections – especially 2007 – when they were on opposite sides and old tensions between Kikuyu and Kalenjin peasants over land in the Rift Valley and between Kikuyu and Luo elites over Jomo Kenyatta’s perceived betrayal of Raila’s father were weaponized.

The new alliances are seen by some as critical in healing these wounds. Others warn that such alliances do not necessarily guarantee peaceful outcomes but must be coupled with institutional mechanisms that constrain elites from resorting to violence.