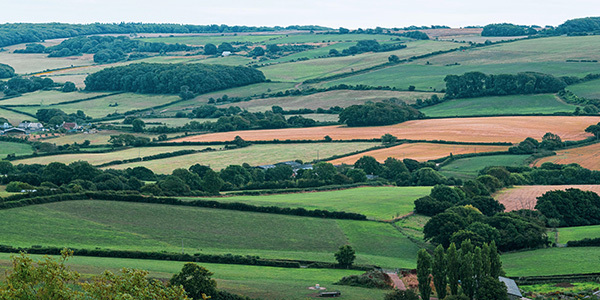 Hedgerows were historically planted as barriers between fields, but in a human-dominated world, they are critical havens, corridors and connectors for wildlife

Hedgerows are as British as fish and chips. Without these walls of woody plants cross-stitching the countryside into a harmonious quilt of pastures and crop fields, the landscape wouldn’t be the same.

Over the centuries, numerous hedges were planted to keep in grazing livestock, and some of today’s are as historic as many old churches, dating back as far as 800 years. Today, Britain boasts about 700,000 kilometres (435,000 miles) of them, a length that surpasses that of its roads.

In recent years, ecologists – especially in Britain, Ireland and continental Europe, but also in places that have more recently adopted hedgerows, such as California – have come to view these man-made structures as important ecosystems in their own right.

They form a vital reservoir of biodiversity in human-dominated landscapes where many species might otherwise struggle to survive. By nurturing pollinating insects, they can enhance the yield of crops. And they do it all while pulling carbon out of the atmosphere.

This growing ecological appreciation is invigorating efforts in many regions to expand hedgerows, or hedges, and so help combat both the biodiversity and climate crises. More hedgerows, ecologists and policymakers hope, could provide a mutually beneficial way for farming to coexist with nature.

“Most people just drive or walk past hedgerows and maybe don’t think about them very much,” says Jo Staley, an ecologist at the UK Centre for Ecology and Hydrology, a non-profit research institute. “But when you start to learn a bit about them, you see the potential.”

Young farmers being trained in hedgelaying, a traditional technique of maintaining hedgerows that involves removing broken or dead material, partially cutting through the remaining stems and arranging them into a pattern that encourages growth from the bottom.

Hedgerows differ in species and structure. This European beech hedge is from the Eifel in Western Germany.

Charles Bowerman, a farmer in South West England, plants diverse hedges that include evergreen refuges for small birds so they can hide from predators in the winter.

Countryside hedgerows are often more diverse, bigger and wilder than their neatly cut urban counterparts. Most consist of trees, shrubs or grasses, or a mix thereof, but they vary a lot in shape and composition across and within countries.

In the UK, for instance, where hedgelaying — the art of maintaining hedges — is its own specialised craft, the National Hedgelaying Society recognises more than 30 styles of traditional hedge. These range from the tall “bullock” hedges fortified with hazel that enclose cattle pastures in the Midlands to short, thick ones in Wales that keep lambs fenced in.

The best-studied benefit of hedgerows is the remarkable biodiversity they harbour. One 2019 study in Belgium found that hedgerows contained more species of herbs — nonwoody flowering plants — in a given area than forests did. That diversity is partly thanks to the typical makeup of European hedgerows, where a shady core of trees is flanked by sunnier layers of shrubs and ground plants. Those niches attract both grassland-dwelling herbs and, importantly, many woodland species, according to a 2020 survey of hedgerows across temperate Europe by ecologist Thomas Vanneste of Ghent University in Belgium and his colleagues.

“That’s actually a good incentive to really protect these hedgerows,” Vanneste says. “Here in Belgium, we don’t have much forest left.”

More plant species often mean more animals, especially if the plants flower and bear fruit at different times. “The little birds love them,” says Charles Bowerman, a farmer who takes pride in his hedges and hosts hedgelaying training for young farmers. Bowerman plants his hedges with about a dozen plant species: In addition to the traditional thorny plants such as hawthorn and blackthorn, he includes hazel, field maple, wild privet, dogwood and holly.

One British ecologist who spent two years monitoring an old, diverse hedgerow near his home counted an astonishing 2,070 species visiting and inhabiting it – mostly insects, but also mammals, lizards, mosses and fungi. Birds and mice used the hedge for shelter and nesting. Spring and summer blossoms attracted moths, flies and beetles, while berries helped nourish birds and small mammals over the autumn and winter.

Agricultural landscape with hedgerows. Insets show some of the key ecological benefits provided by hedgerows.

Hedgerows provide many benefits to the ecosystem.

The hedgerow ecosystem also supports a wider ecological community. Bats and moths use hedges as navigational guides, while badgers, hedgehogs and some invertebrates such as ants and spiders use them as byways to commute across the landscape. Hedgerows are especially important when they’re used to connect other, often increasingly fragmented, ecosystems.

In 2018, a study by researchers in Europe proposed that planting new hedgerows could be the most effective way to link such isolated ecosystems, enabling species like the hazel dormouse to persist in farmland.

Even the remarkably rich soil life underneath a hedgerow can benefit its neighbourhood when burrowing creatures such as earthworms wriggle into surrounding fields, notes ecologist Tancredi Caruso of University College Dublin.

Bowerman says he’s seen growing interest from young farmers in planting hedgerows for biodiversity’s sake — but, he notes, they’re costly and take a lot of work to keep healthy. Even with UK governmental grants to help pay for initial planting materials and some forms of maintenance, regularly trimming and rejuvenating them is time-consuming and labour-intensive.

In some places, such concerns can discourage farmers from adopting hedgerows. In a 2021 survey of California almond growers, for instance, 32 percent said they weren’t interested in planting hedgerows or other pollinator habitats, partly due to costs and labour, and also over fears that they’ll attract nut-gobbling pests like starlings, says ecologist Lauren Ponisio of the University of Oregon.

Domestic violence: Pregnant Black women in US have up to three-fold higher risk of dying by homicide